Wings of a Newborn

The so-called miracle of life is that it takes some crazy courage.

Everyone has dreams, and a hundred years of life is a lifetime spent working to make them come true.Feng Ru, a Chinese who came out of Enping. He was China’s first aircraft designer, manufacturer and aviator.

In 1909, he flew a homemade “Feng Ru No. 1” aircraft soaring in the skies of Oakland, United States, from the wings, rudder, propeller to internal combustion engine and other large and small parts all homemade. After soaring over Oakland for more than 800 meters, the plane landed safely and opened the first page of Chinese aviation history.

Build a flight museum in conjunction with local history and culture to create a city in the sky scene. It creates a base for aviation science education in Guangdong Province and becomes the mission of Enping Quanlin Golden Town.

We belong to one mother with nature. We belong to the same city-state as the universe. Mankind continues to go into the unknown in order to find a way to live with the world.

When Copernicus imagined the beginning of the universe, he thought that the orbits of the celestial bodies were circular, because only circles are perfect. But why does time keep moving forward? Why does the universe increase in disorder over time in the same direction as the expansion of the universe? We can’t explain it.

This project is looking for answers to questions that have no answers.

The project is located in Qingnan Lake Reservoir, Dongcheng Town, Enping City, adjacent to the historical gold rush relics and close to Shenmao High Speed Rail Enping Station. The sales center covers a total area of 1500 m², with the sales office on the first floor and the Feng Ru Cultural Flight Experience Center on the second floor. 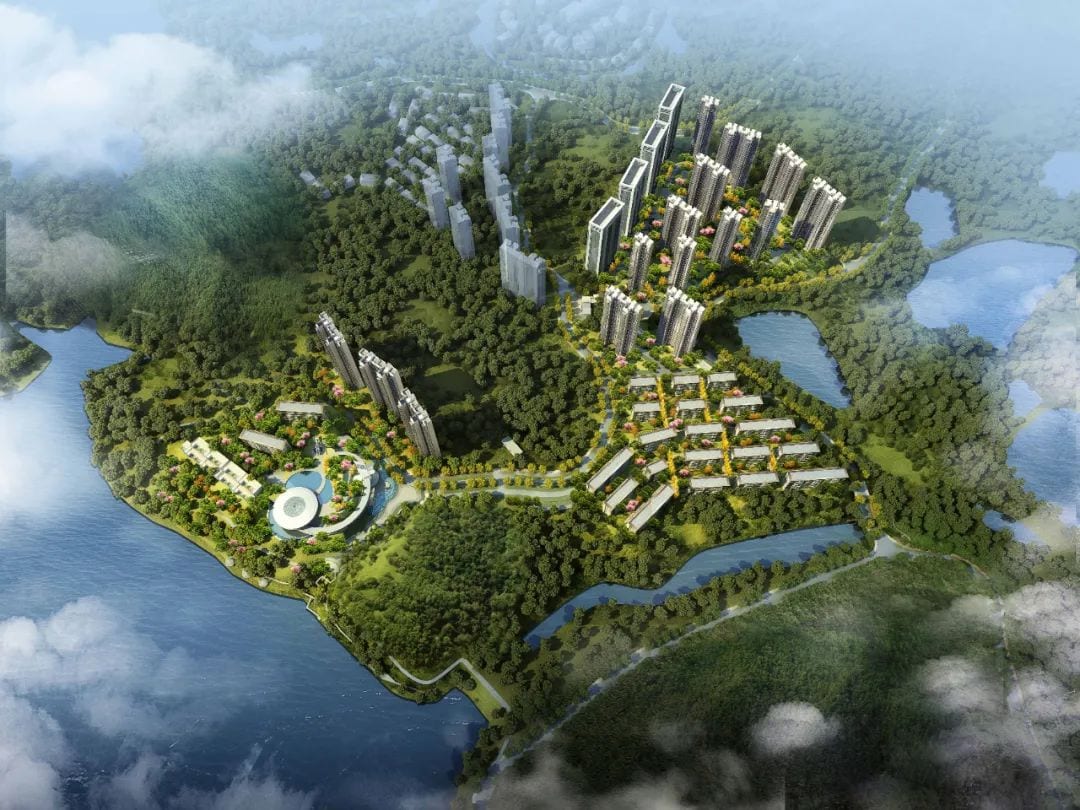 The overall architecture of the sales center adopts a low-impact architectural solution to nature. The project is shaped like a UFO waiting to take off between two hills, and through the use of vertical space, the circular building is embedded in the low hills, allowing the mountain landscape and technology-filled architecture to blend with each other. Floating structures in the pass can direct pedestrian access to the reservoir at the bottom of the mountain. The building and nature become a community, building a blueprint for the future of human life. 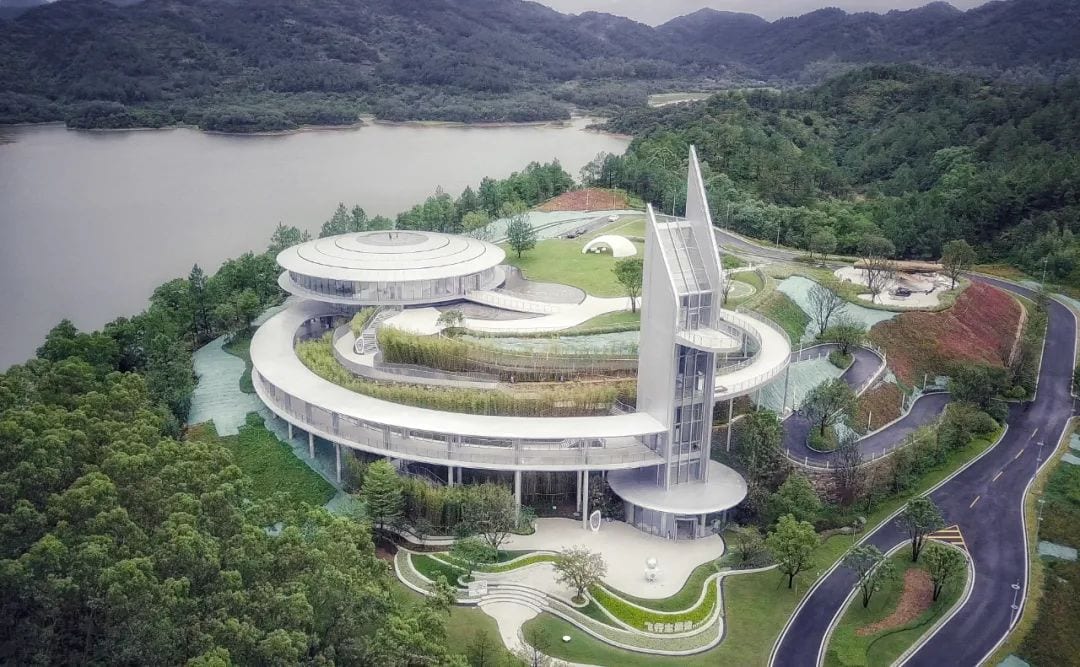 ▲Aerial view of the sales center

Each floor of the interior space and display has a different image of nature in front of people’s eyes, the sky, water and sky meet, water mirror. It is the first time for the company to be able to provide a service to the public. 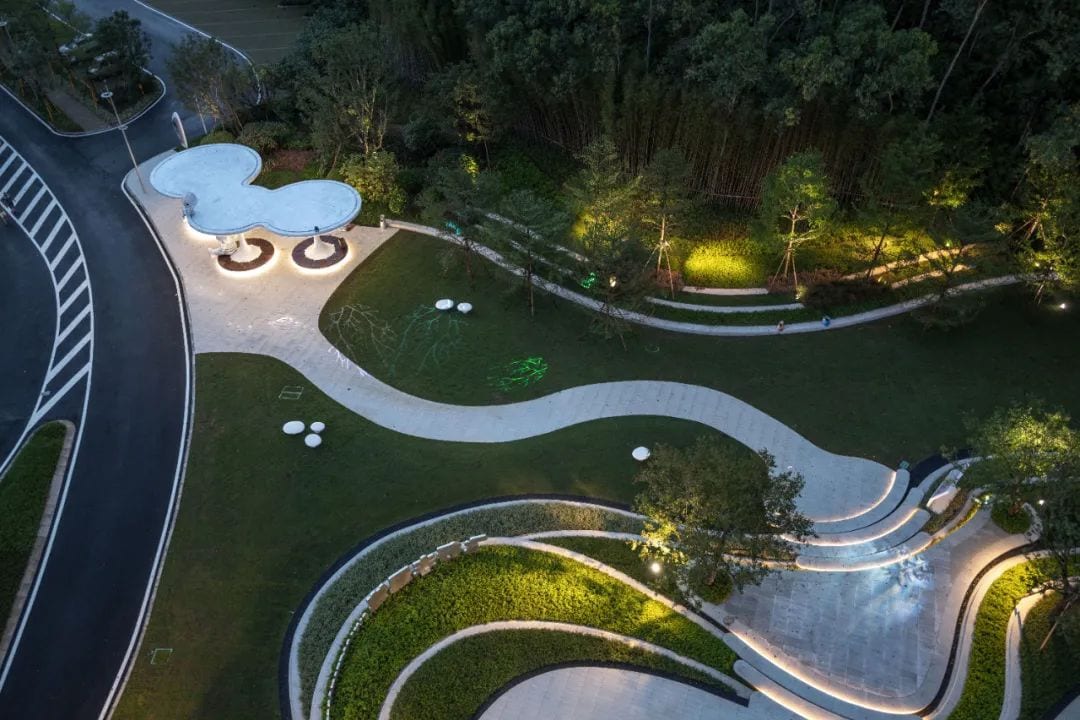 ▲The entrance to the sales center

The main body of the building extends out through a continuous circular circulation corridor, creating a dreamy sky garden for the people. It will be the first time for you to visit the building. 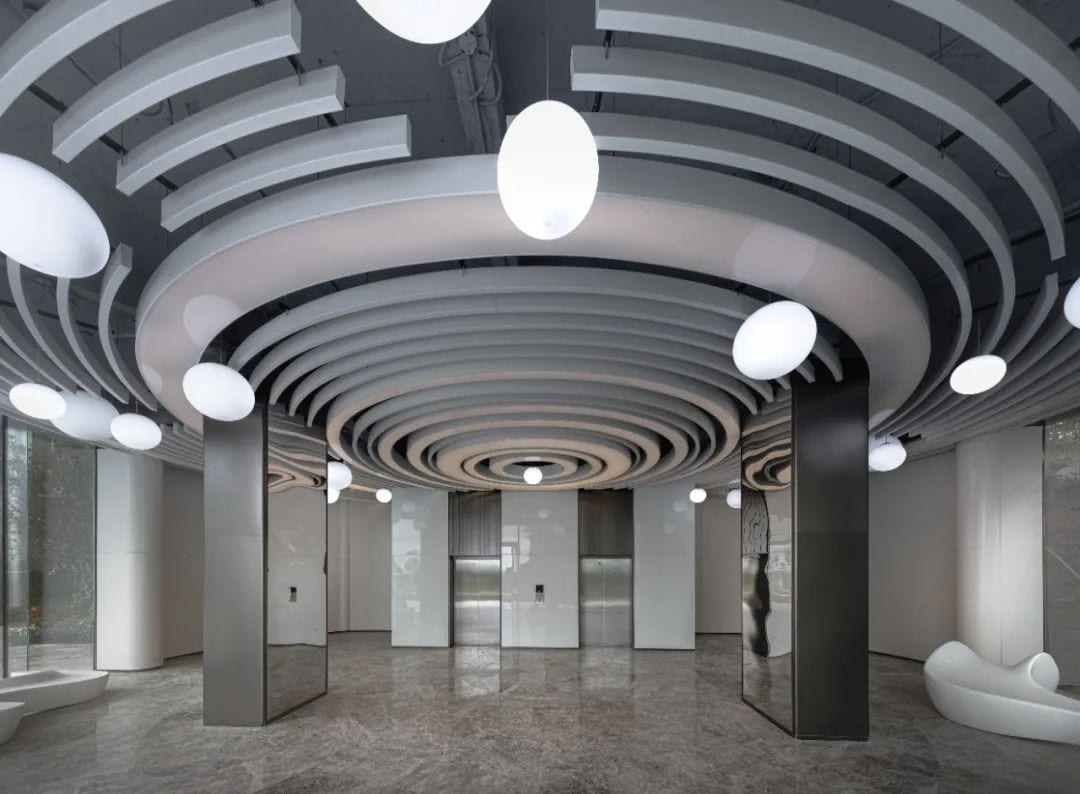 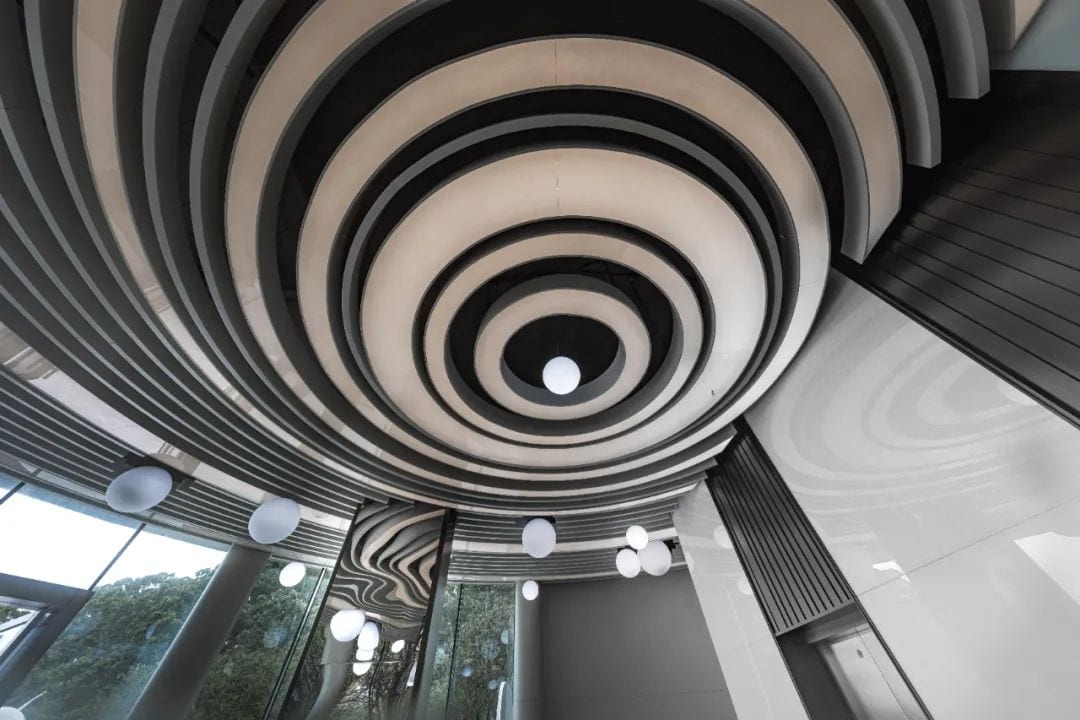 From the ground floor, take the tower elevator to access the Flight Theme Pavilion on the second floor. The halls of the tower are empty and borderless, with only glass and mirrors. If a beam of light could collapse a person into a speck of dust, from here a light machine could launch into the boundless universe.

Flying out of the Universe 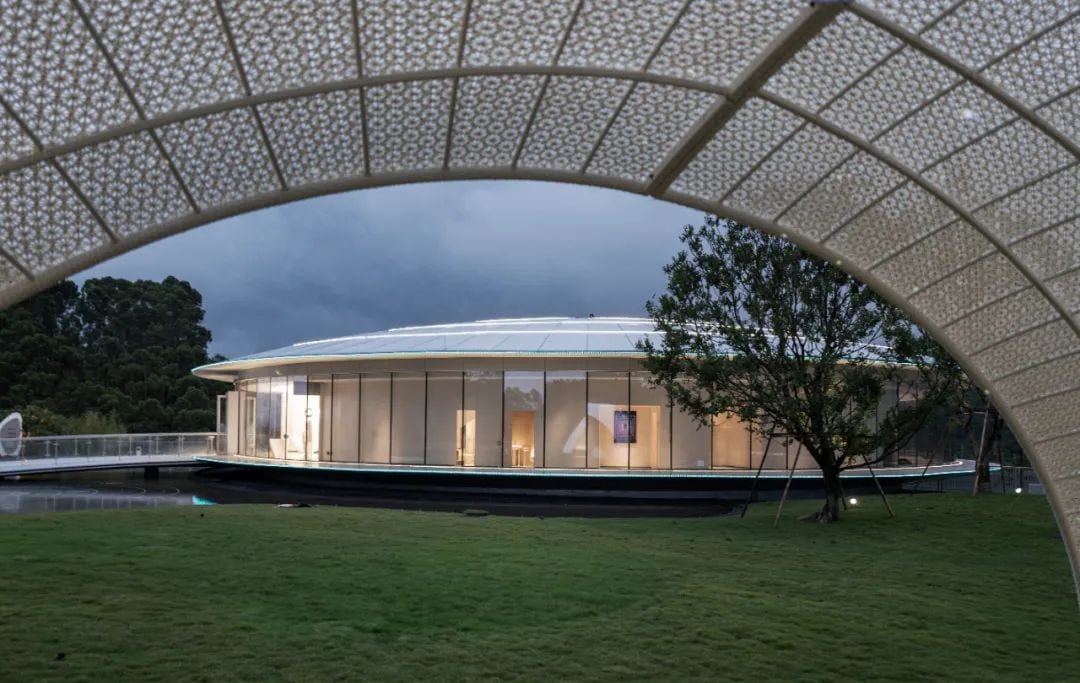 In order to create a sense of dynamism of the UFOs rising among the clouds, the building is nested within the mountain, presented in the form of a flattened circle, which fits parallel to the water feature, and a full curtain wall is used on the periphery, visually lifting the building off the ground. When viewed from different angles, the building appears to be flying low in the mountains, or floating on the water. At night, the aperture of light in the interior of the building is layered and has a strong surrealistic atmosphere. The children will be curious and feel a strong desire for adventure when they see the UFO floating between the mountains from a distance. 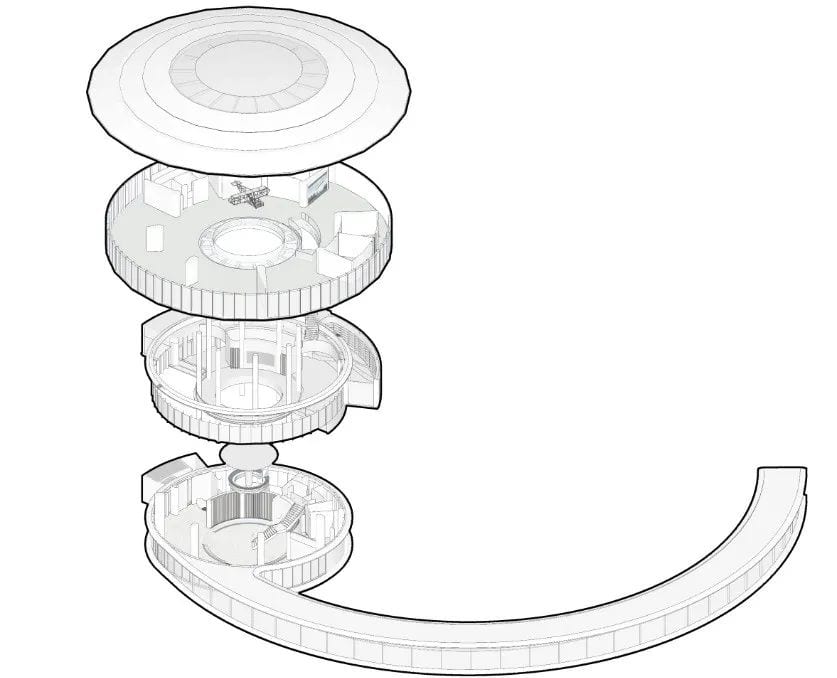 The Flight Theme Pavilion is mainly a space for children’s activities, including science classroom, Fengru flight interactive, VR flight experience, simulated driving, interactive production learning area, children through the related theme experimental classroom to learn about aerospace knowledge, experience soaring through the blue sky and walk in the universe, make their own airplane and rocket models and so on. The children were able to make use of their boundless imagination to fly out of the world and catch the stars. 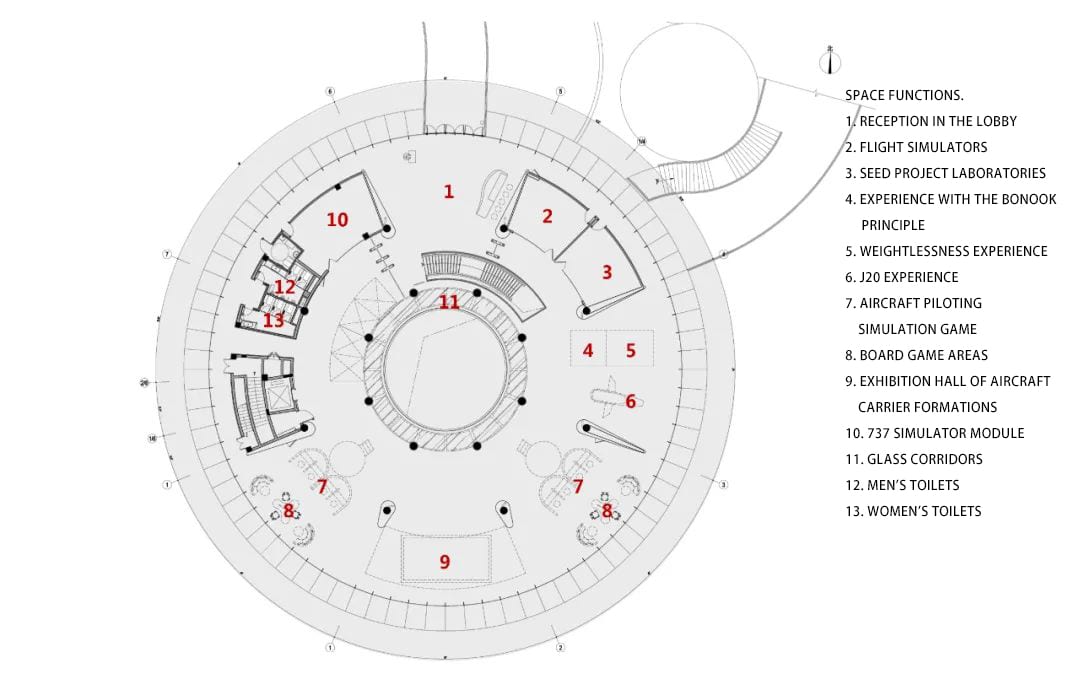 ▲The second floor plan of the building

The sun gives energy to the growth of all things, but also the energy of the human soul. The design of full-length windows and glass dome makes the sunlight spread out in the space during the daytime, and the open night feel like the stars wrapped in the sky, just like the Milky Way roaming. 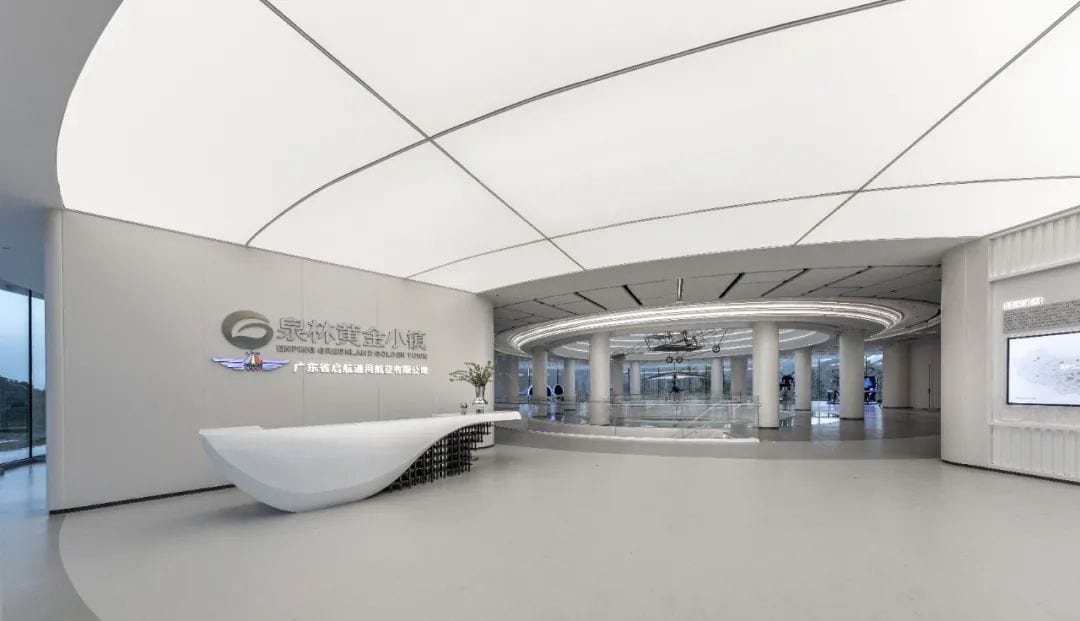 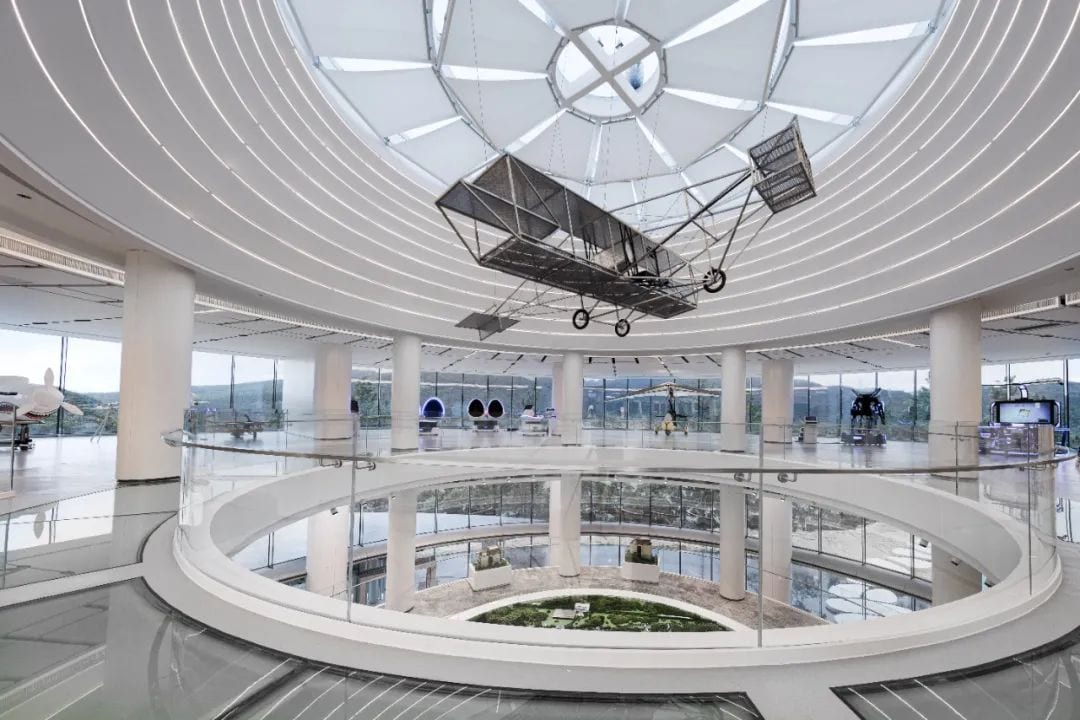 “Three circles, two rings, and a center.” In the center is the eye of the firmament where you can look up at the sky and hang a model of a realistic airplane of Feng Ru II. The three circles corridor as a traffic line encloses two display rings. 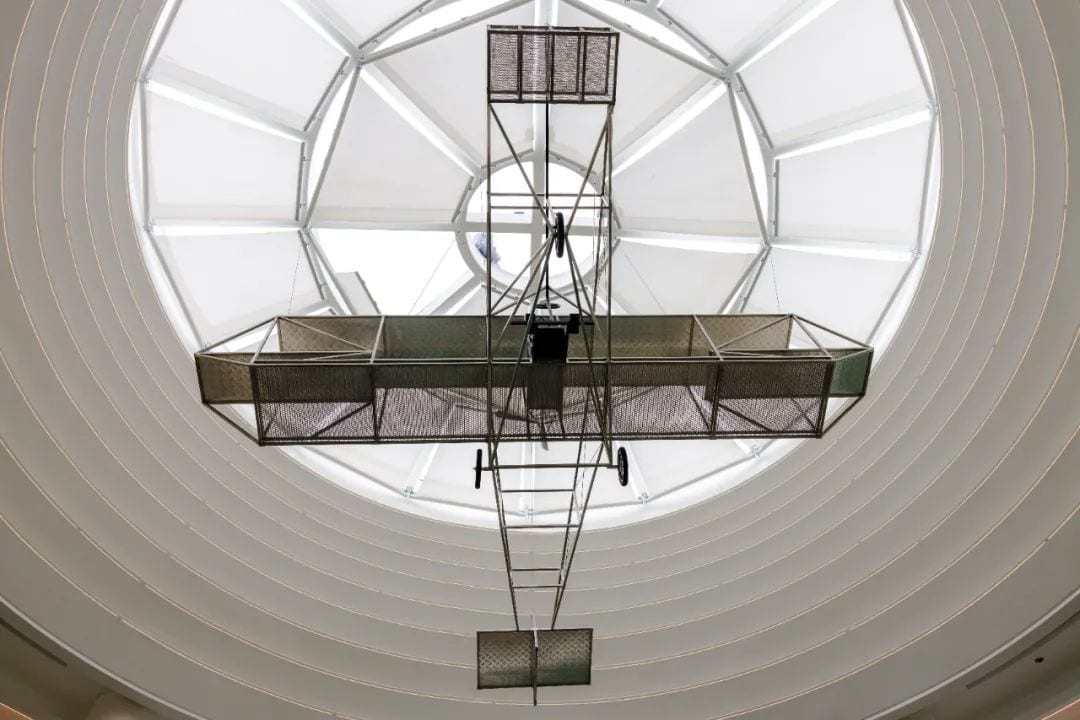 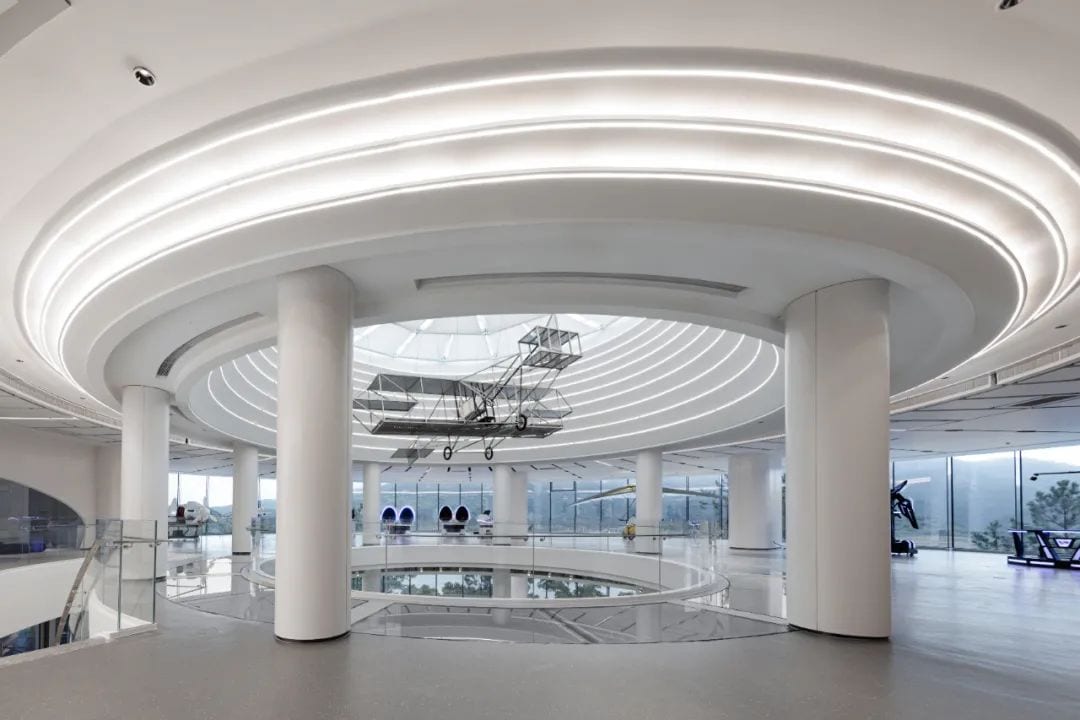 In the Aerospace Culture Interpretation Area, children and their parents can have a closer look at the two Gulfstream G200 business jets and the Eurocopter B0105 helicopter gunship that the museum has invested heavily in. In the exhibition, you can see the progress of modern aircraft manufacturing and the never-ending ambition of mankind in the field of aerospace through the comparison with the Vonleh aircraft. 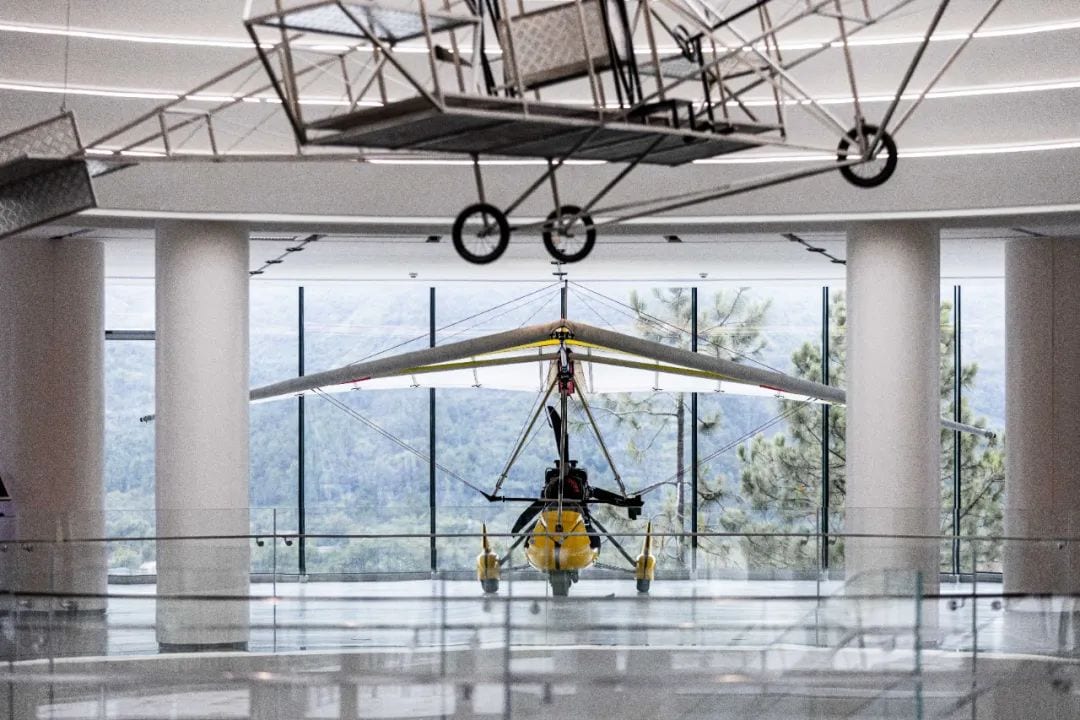 And through the aerospace classroom, children can learn about the history and types of aircraft development, knowledge of aircraft structure principles, takeoff principles, as well as aerodynamics, aviation meteorology and other rich aerospace knowledge, completing a fun and educational tour.

We run through the aerospace knowledge points with kid-friendly engaging activities, and the Star Age is like a hidden egg in a preset location on the second level that kids need to find, unlock, and break into. After punching all the items, not only gained a deep and interesting aerospace experience, but also sowed the future of China’s aerospace in the hearts of children.

Pick up the steps down the immediate landscape from the sky to the ambiguous dense of the sky and water. The mezzanine is a floating flying museum of the Space Needle, point-shaped lights embedded in the circular star-track-like ceiling, standing still in place, spin, the body seems to be able to get rid of gravity to take off. The physical model of the golden town of Enping flickers brightly and darkly under the shade of the reservoir and mountains, which is a controllable rather than a distant universe.

The functional space of the middle mezzanine is composed of sandbox area, meeting area, food package area and book bar. 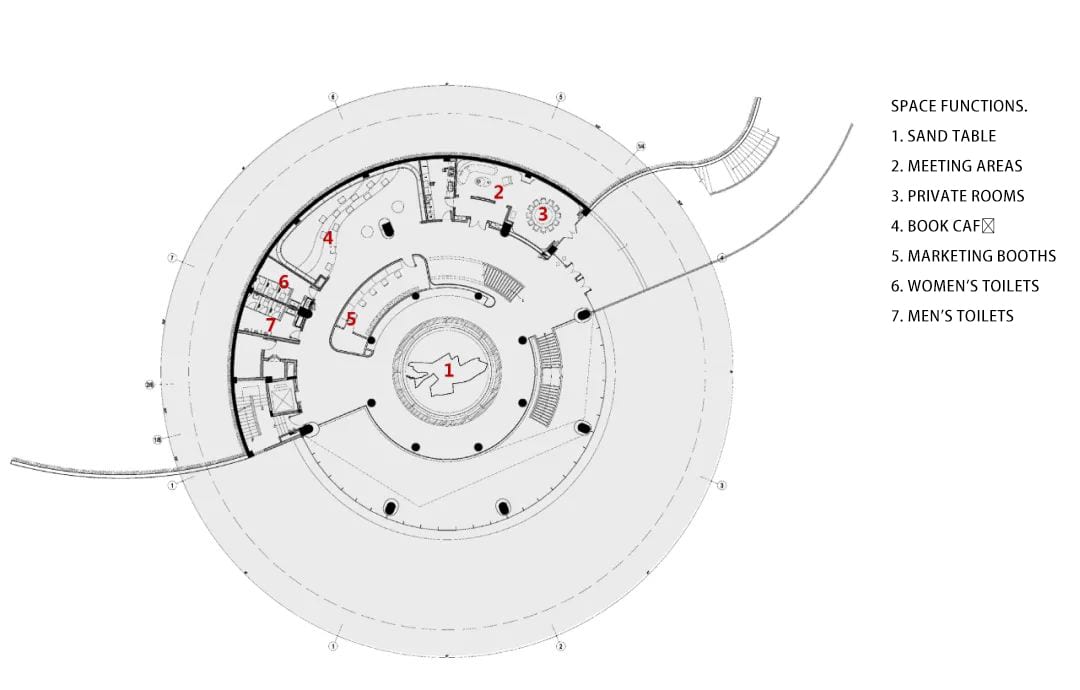 The design of the mezzanine ceiling and floor shows the abstract pattern of the lines of the Big Bang, the sandbox is shaped like a huge spaceship slowly rising from the ground, the top of the sandbox is a metal body art installation, creating a dreamy industrial aesthetic. 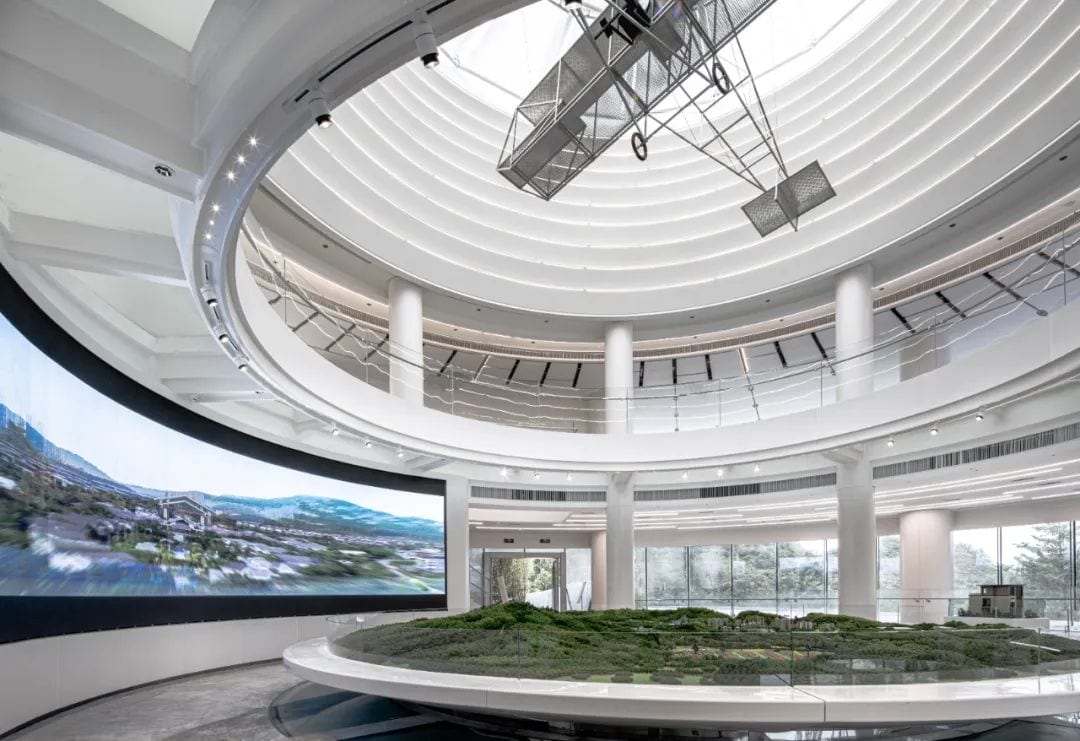 The ground on one side of the space is hollowed out and made into a curved pond, which visually interacts with the distant mountain scenery, and the life force comes out of the cocoon.

Dialogue with the Future

The modern city is built around a large shopping mall as a midpoint, creating a large number of enclosed buildings. People’s horizons and movements have become fixed, and never before have they been so densely packed and so unconnected. As the new century dawns, people need new and more innovative spaces for dialogue.

The first floor sales center’s peripheral vision encourages the individual to actively perceive the outside world, to confront oneself and others; at the same time, through the furnishings and selection of furniture, the designer makes the space highly fluid and comfortable, in line with the sales center’s pursuit of effective communication. The entire functional space is composed of reception area, in-depth negotiation area, children’s area, water bar, preliminary negotiation area, signing area and office area.

From the mezzanine floor, you can have a glimpse of the Space Needle. 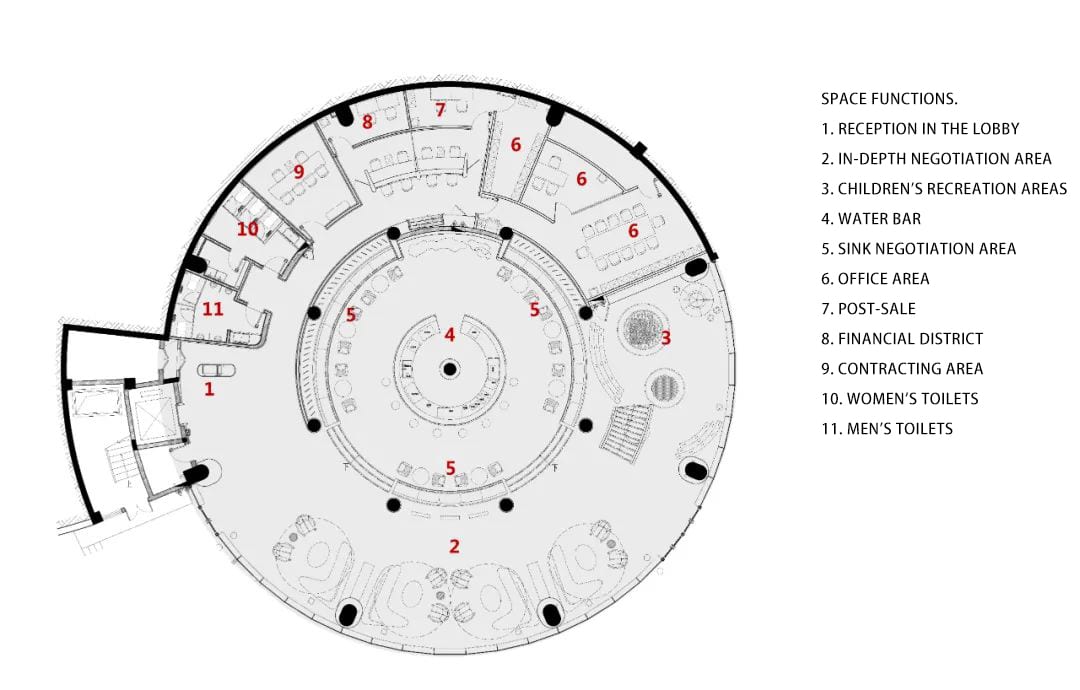 ▲Floor plan of the first floor

The slender Space Needle holds up a giant bowl-shaped sandbox, and the anti-gravity design seems to put you in the universe. The Space Needle sunken bar is surrounded by eight groups of sofa seats, chandeliers and barstools to highlight the beauty of the circle.

The installation is from the Italian high-end brand Glas Italia, which is famous for its glass products, reflecting the view from the window, brightening up the wall, but also resembling the entrance to connect with the other dimensional space, which makes people think, as if touching the mirror, you will be in another planet. 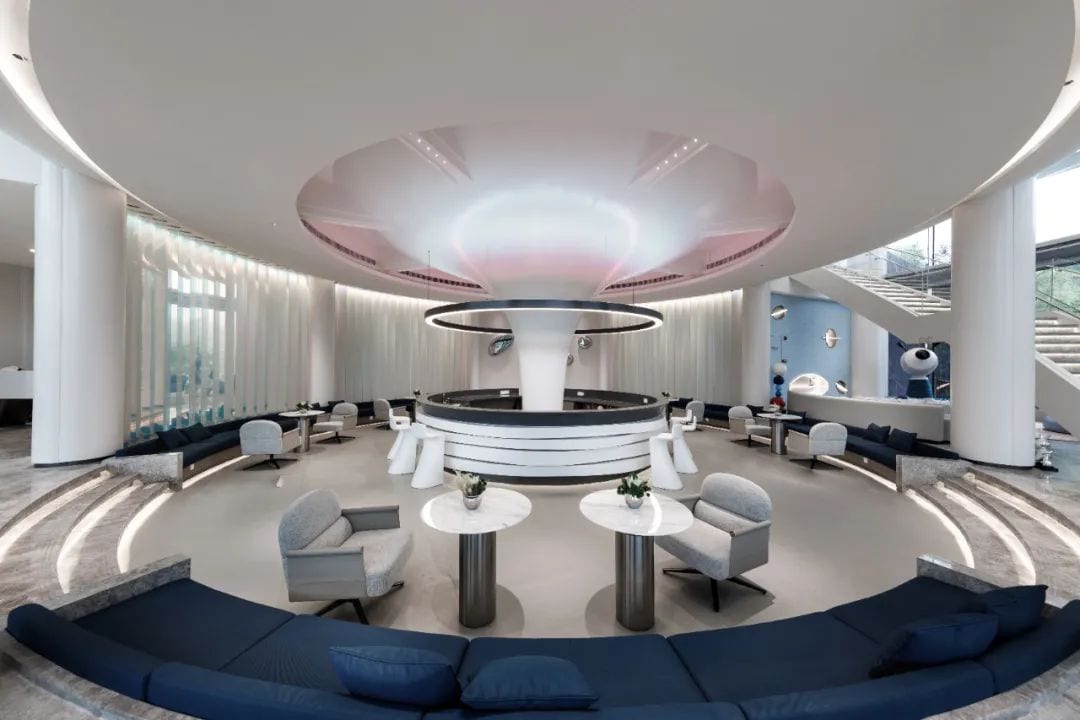 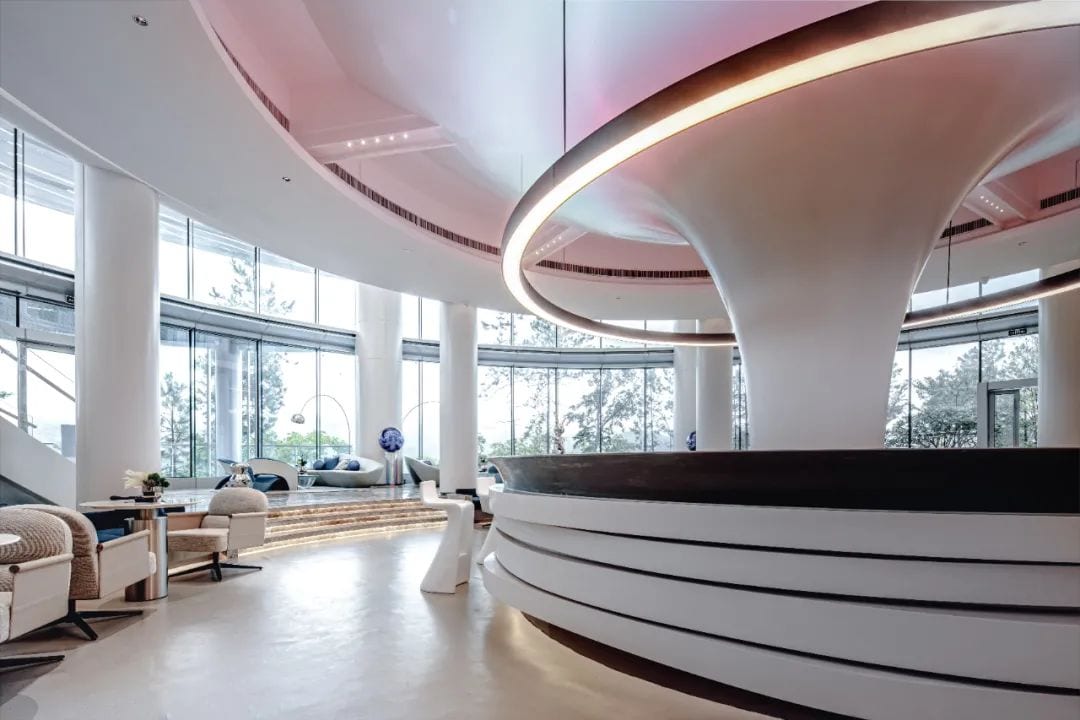 The Qingnan Lake reservoir gives the building an unbounded and boundless mirror-like still water, but also gives the project a magnificent and majestic sense of narrative, making it dreamy and elusive.

The water symbolizes nature, with the white outer edges of the buildings suspended above. People gaze into the distance near the water, where water and sky meet. A primal experience of life flows through the body, and the shape of the soul has never been so clear. The reason for choosing this place is becoming clearer and clearer. 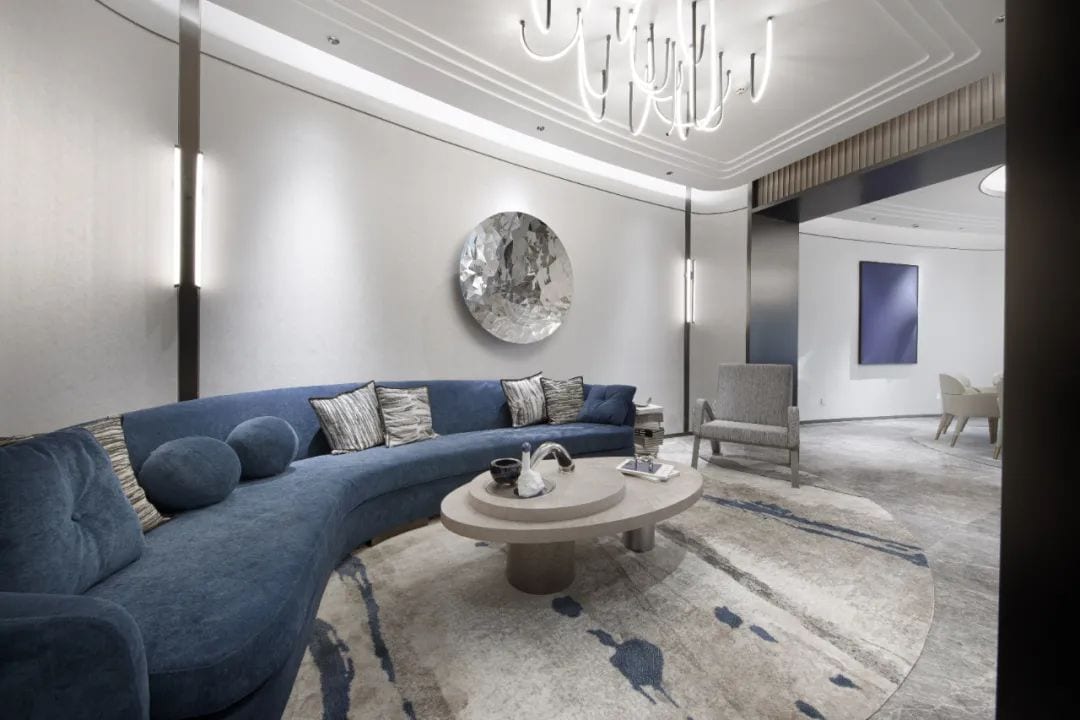 The curved sofa in the deep conversation area comes from Zaha Hadid’s classic ‘Moon Sofa’. It is the perfect combination of futuristic design and ergonomics, providing a comfortable space for deep conversation. 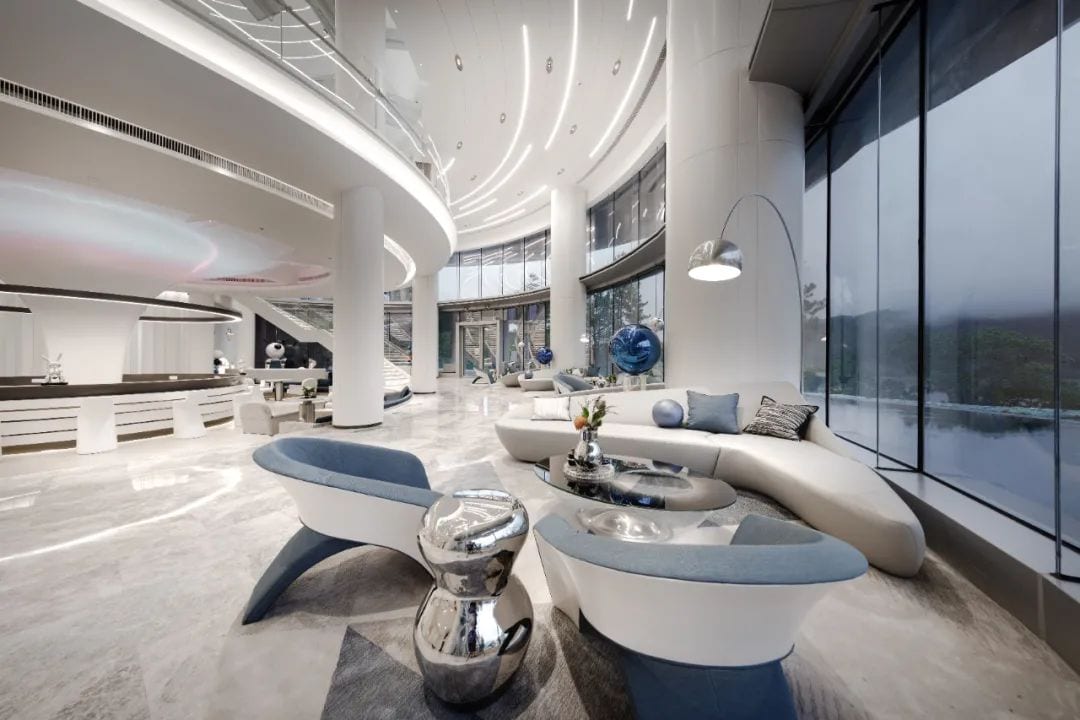 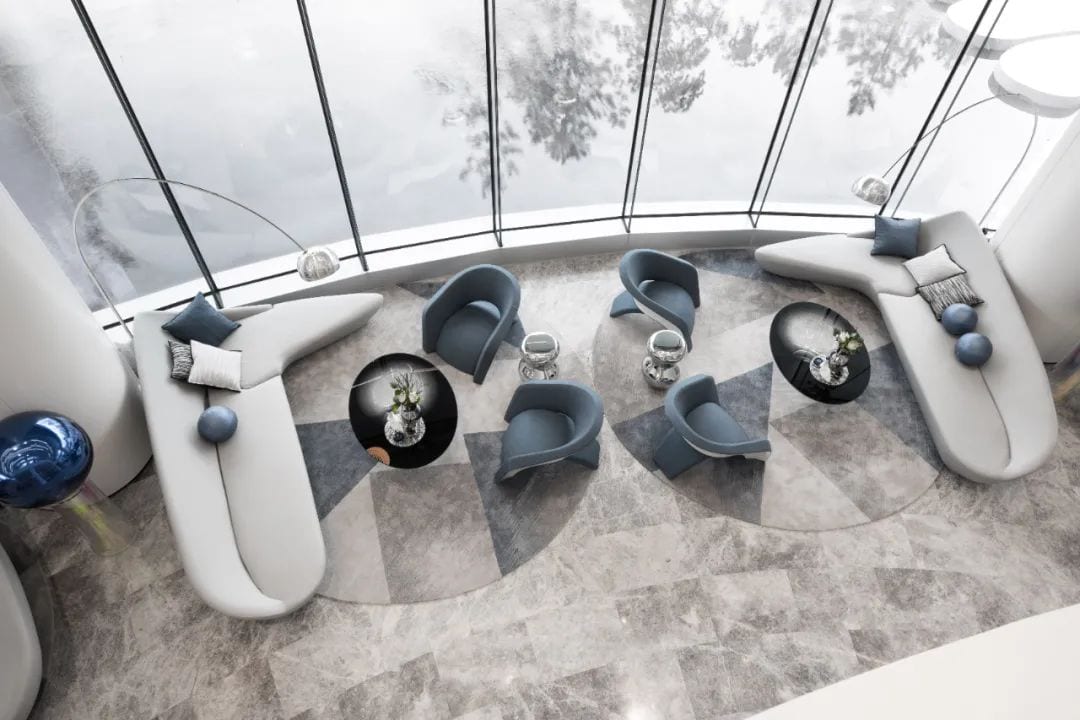 The children’s play area on the first floor is located under the stairs. In order to protect the children’s safety, a spherical device was added under the stairs to provide a barrier. The spheres are fixed to avoid collisions and are separated from other areas by a long sofa. It is the first time for the children to have the opportunity to play with the sofa and the Lego sofa, which are popular with children. 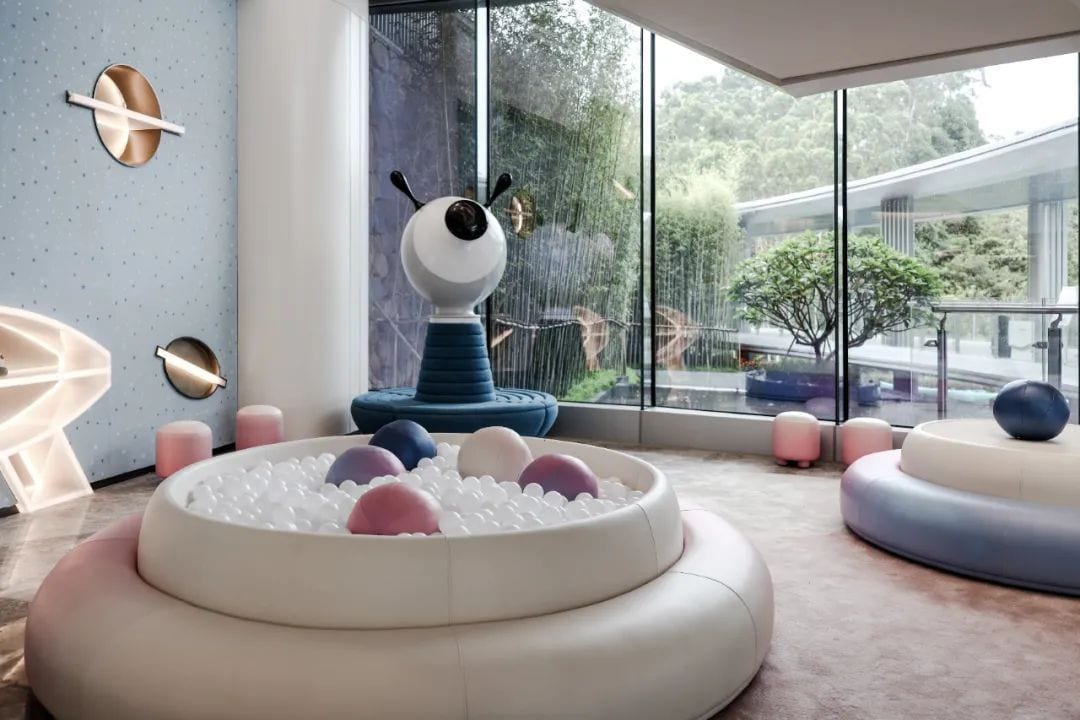 We have infiltrated the spirit of Fengru into the design of this case, creating a pure white city in the sky, science and aerospace culture. Through the interior design, we hope that every visitor to the Chasing Gate can feel the power of upward mobility, let curiosity be the engine to pursue their dreams, and stay close to the world, but have the true heart.

Leonardo da Vinci said: “The perfect man is the measure of the universe”. His human Vitruvian man is not only a work of art but also a philosophical masterpiece in the search for the meaning of human orientation in human history.

Feng Ru has given Enping an anchor point for those who explore why the universe is the way it is, and for those who, from generation to generation, move from curiosity to the next miracle.