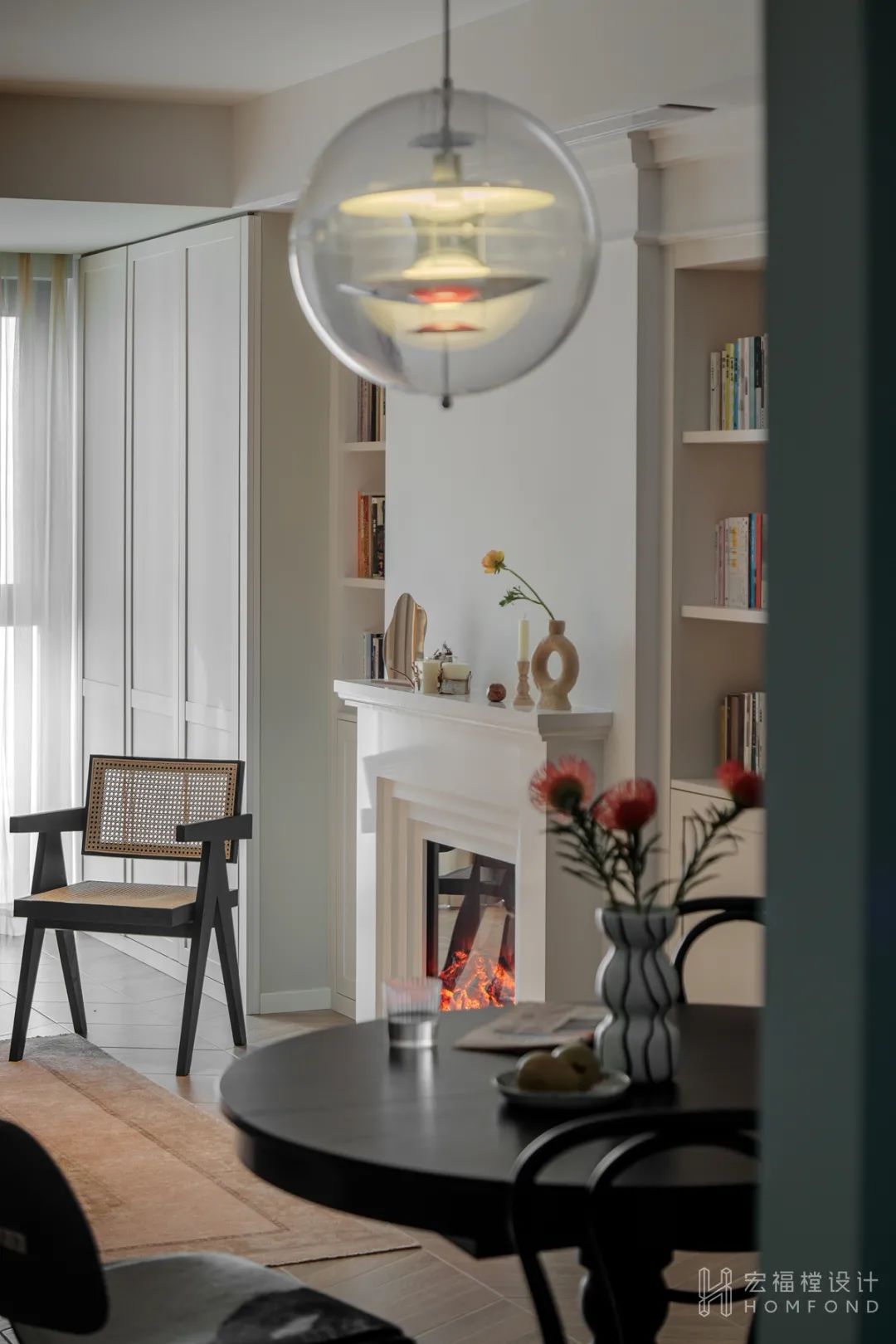 “When I was a child, my favorite thing was to follow the elders of my family to play in the fields in the countryside. The day will pass surprisingly slow, but also always harvest a lot of fun things. Now that I’ve grown up, I often miss that time, and collecting things has become a hobby I’ve always kept. Now that we have a new family and a house of our own. We want to not overdo a certain fixed style, just put in the items we each like the way we like them and live happily ever after.” — Homeowner Needs 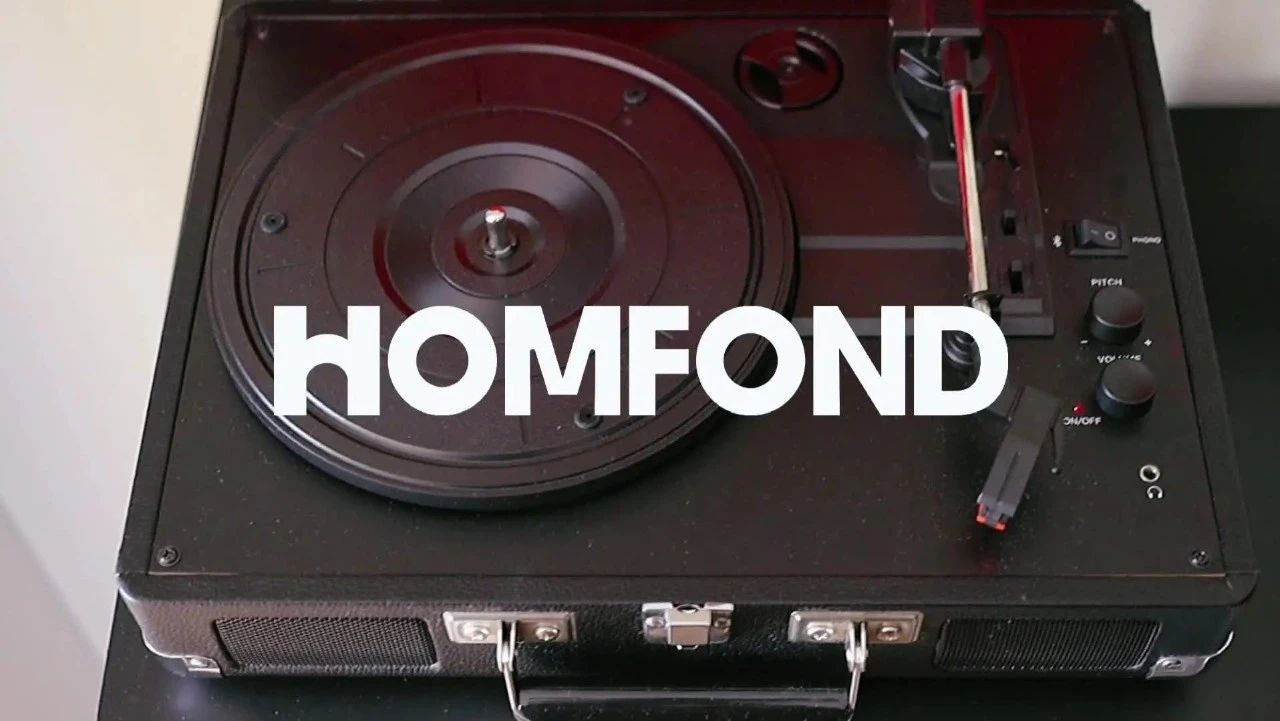 After gaining an in-depth understanding of the living habits of the two homeowners, we first focused first on the basic remodeling, using wall changes to re-divide functional areas and to make the living lines more fluid. Then we used part of the reconstructed wall to increase storage space and improve the overall comfort of the apartment. The space is dominated by egret color, which is warm and soft. With the neo-classical plaster line modeling fireplace that the homeowners like, the mood of the space is enhanced. Finally, the items they like and have been collecting are then displayed as soft furnishings in the space. From a good sense of comfort to the beauty of the space, the soothing and delicate immersion here seems very powerful. 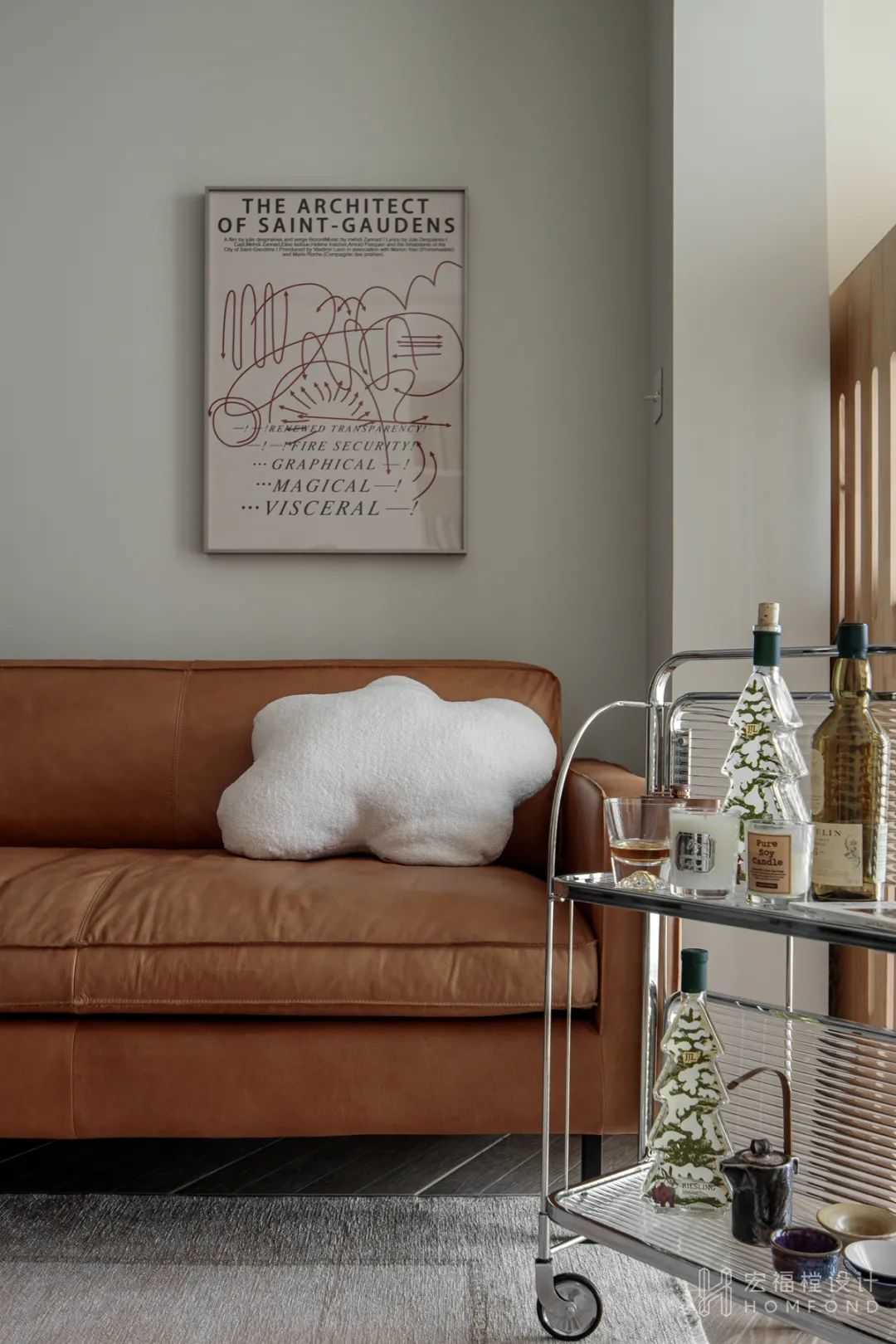 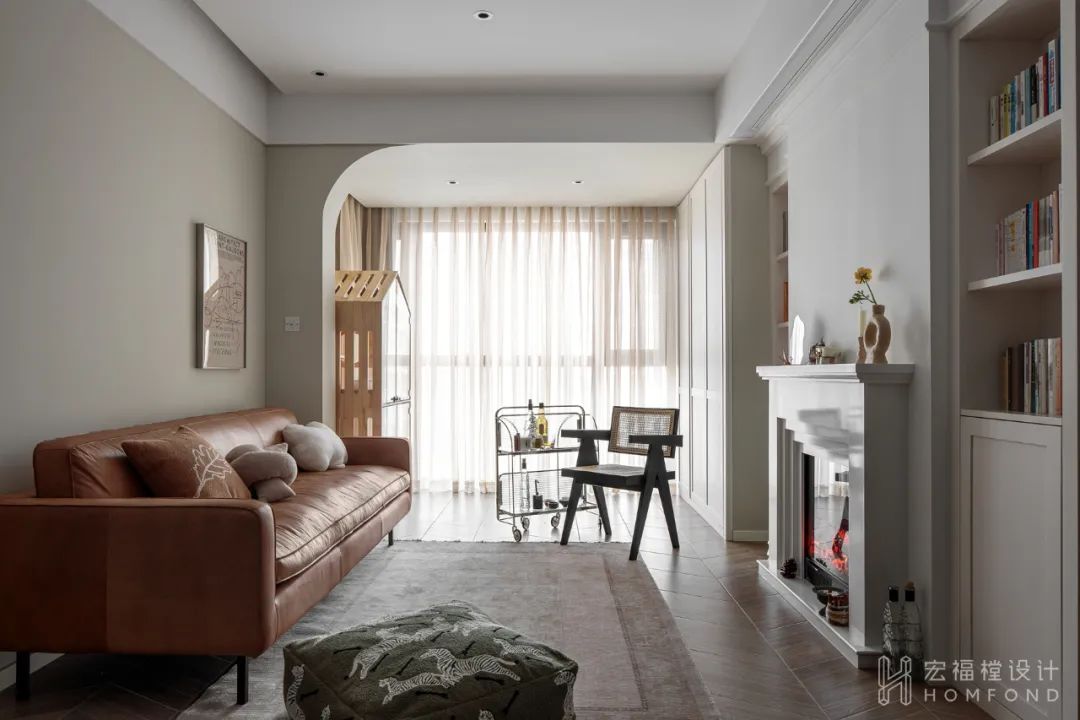 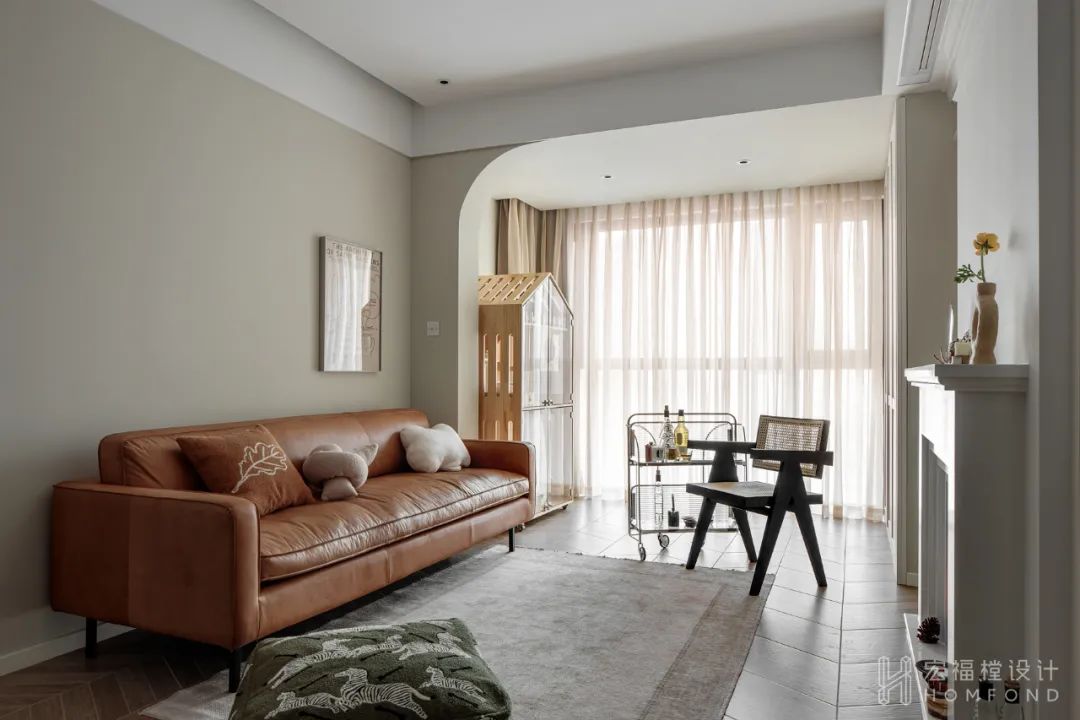 The abundant sunlight gets a soft filter through the cream-colored gauze curtain, and the soothing tones and simple and clear lines of the design make the space very modern and artistic. Unlike conventional living room furniture placement, it can be moved at will according to the user’s living habits. The overall atmosphere distances itself from the increasingly homogenized space. 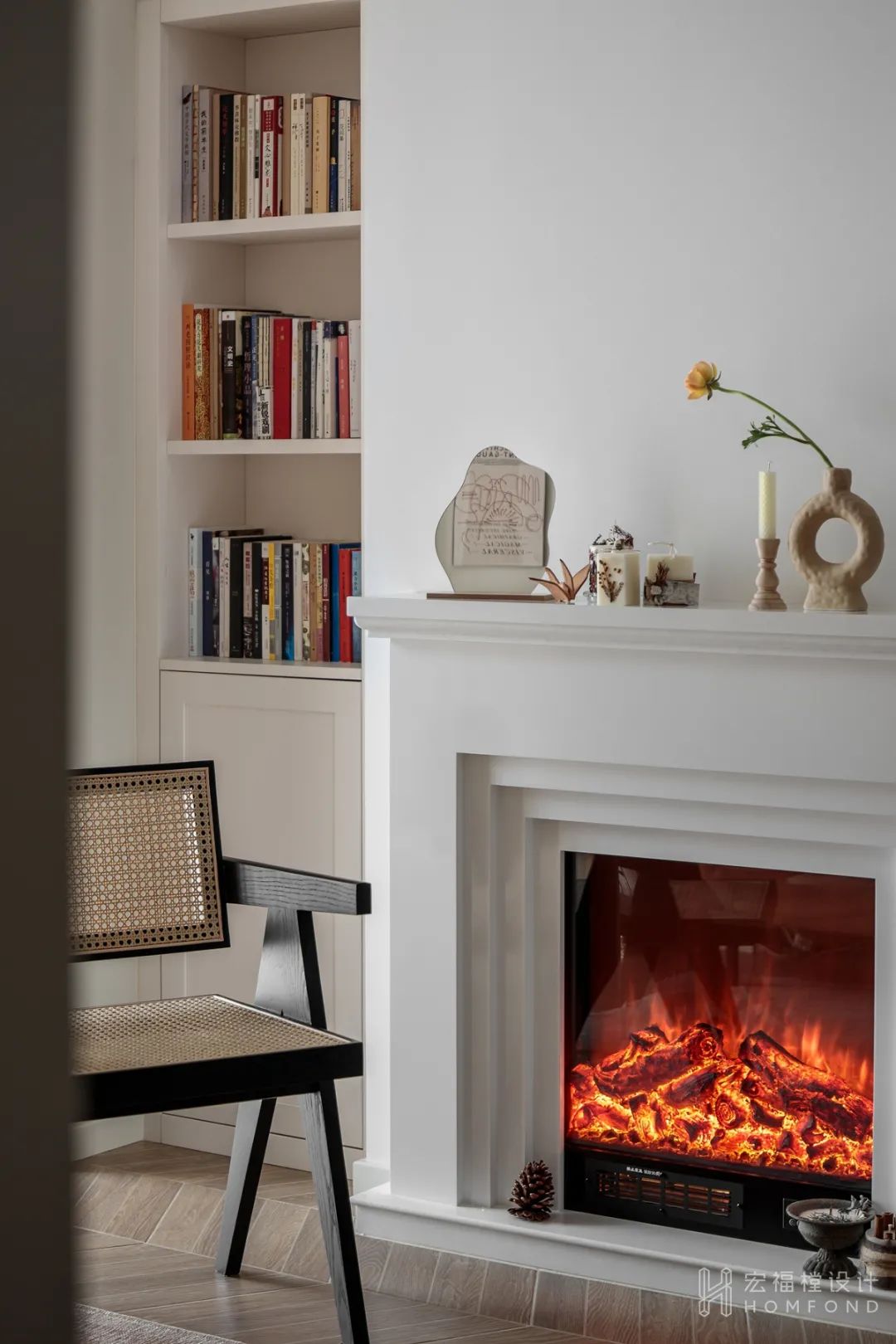 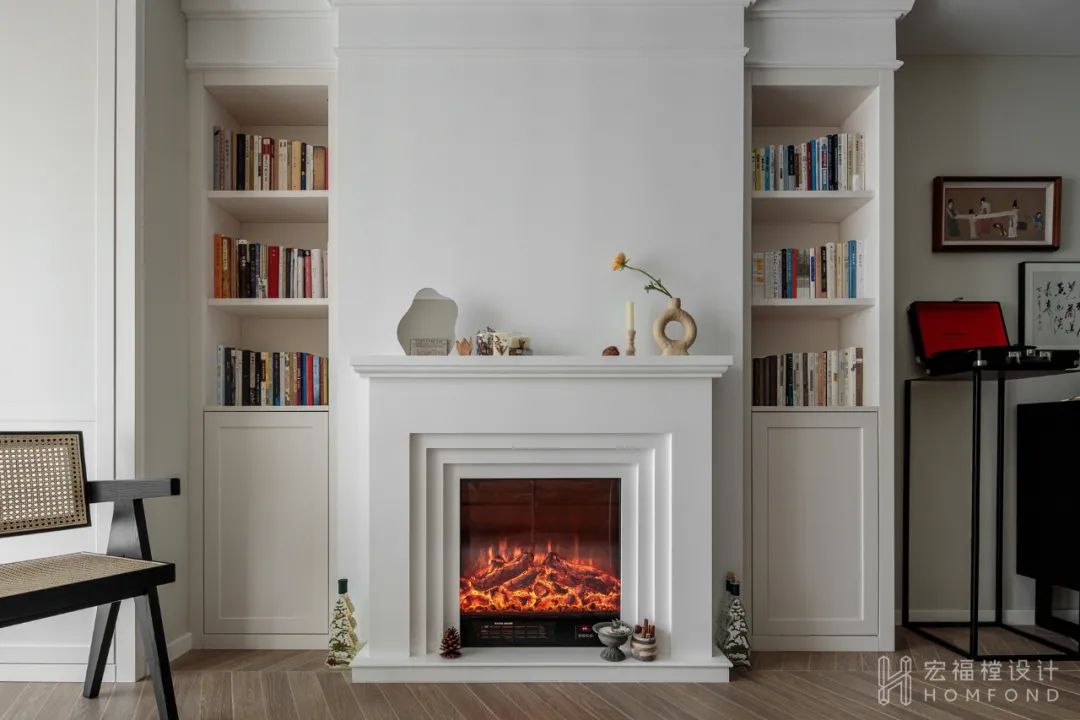 In many of the movies they have seen, everyday or for the holidays. Good friends sitting around the fireplace, drinking wine, listening to music and chatting, is such a desirable image. Because of the structural constraints of the house, it was designed as a neo-classical plaster stacked shape to be presented decoratively.

Above the fireplace is the projection curtain, which is put away daily and put down again when it is used. The niche is used to hold small objects such as candles and incense made by the female homeowner. On the two sides are some of the books that the male homeowner often reads. The existence of each of them is harmonious, serious and warm enrich the whole life. 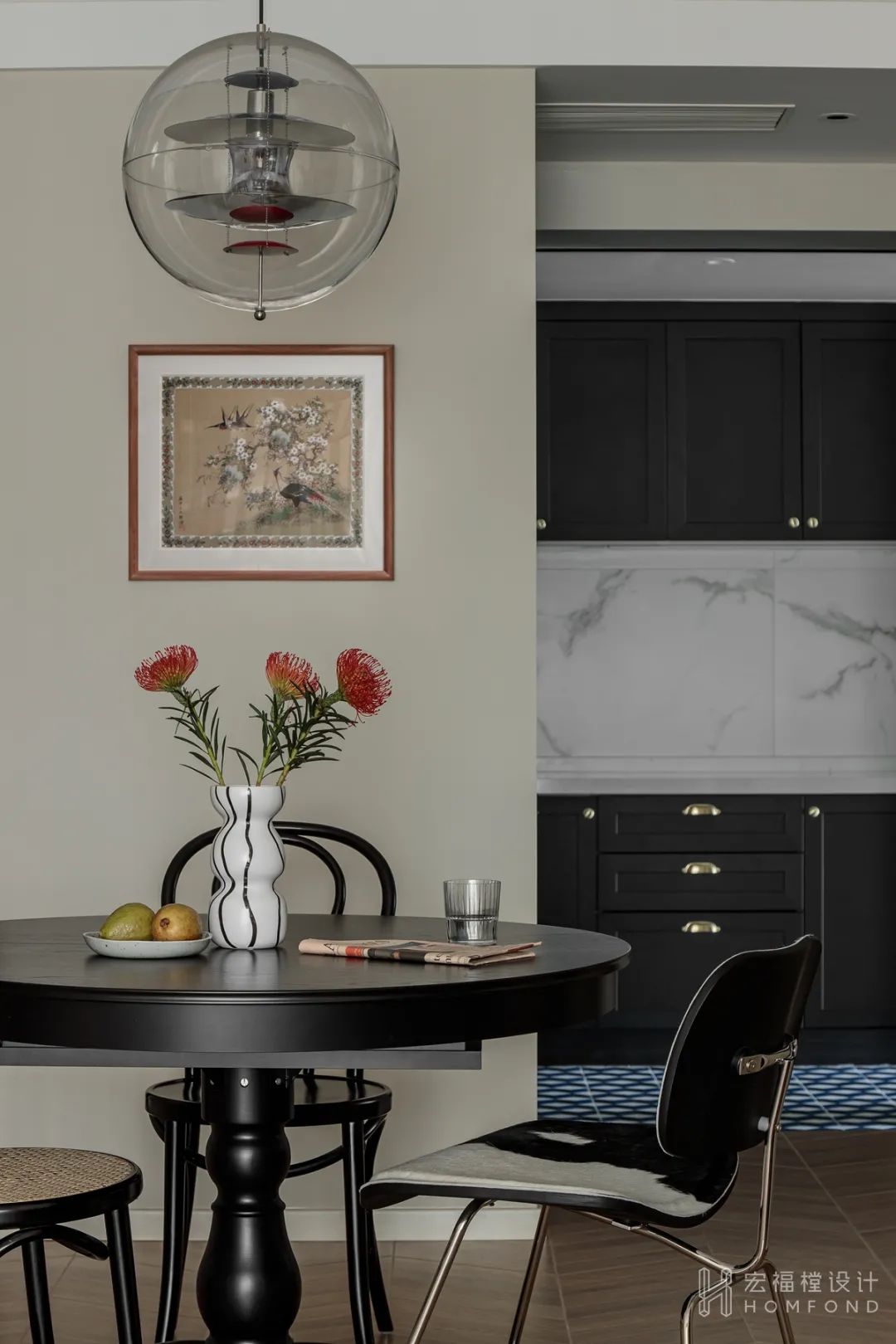 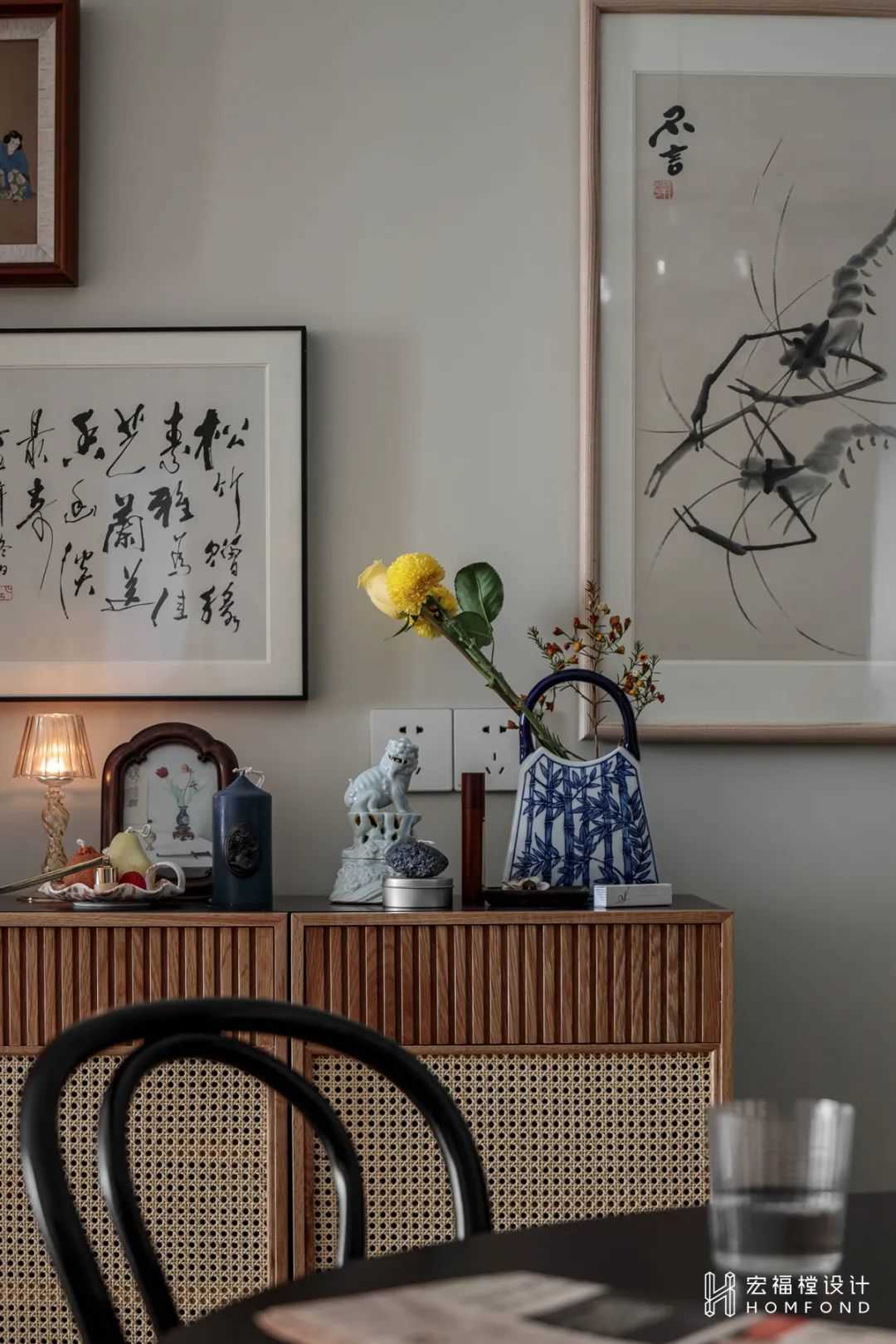 The male owner is very fond of painting and calligraphy, music and ceramics. A vinyl record player, a silk painting by Wang Chengxun from the Qing Dynasty, and a rustic ink painting are just the right mix of these items. In their leisure time, finding a favorite record and slowly putting down the needle is a relaxing time they cherish.

Because of the good ventilation, and the usual diet is on the light side. Even if they are having a dinner party with friends, the smell of grease and smoke will not remain in the house for long. On holiday mornings, the two of them will drink tea and read a book at the dining table, chatting casually. The fatigue of the working day will disappear. 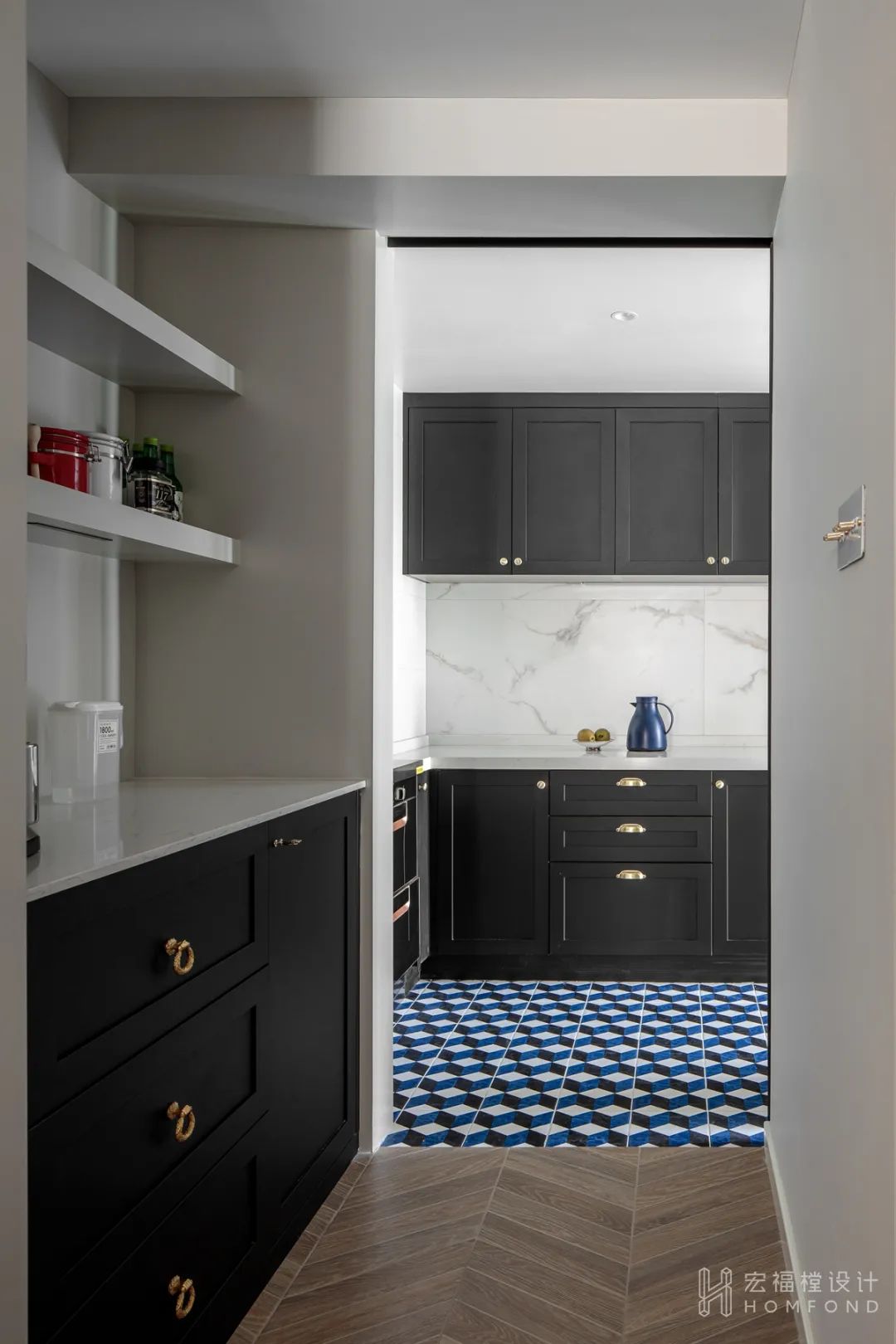 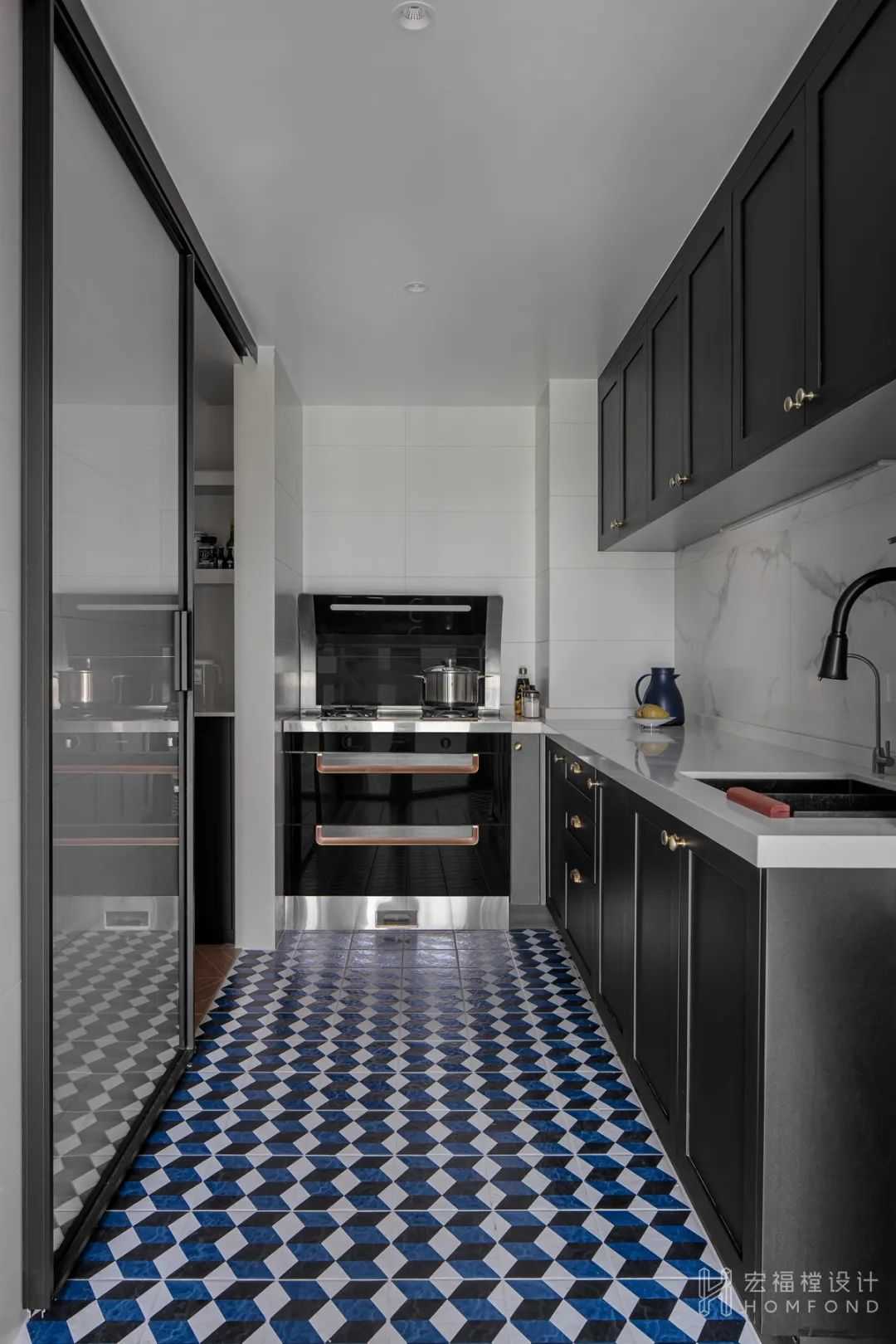 The inside of the newly built entrance wall connects to the kitchen. The open area is used to put the mugs, whiskey and sake that both of them collect. The storage space is for miscellaneous items and snacks.

The owner’s original intention was to have a fully open kitchen, but since the family has a cat and it occasionally goes to the kitchen to steal food, we installed a very flexible sliding glass door at the junction. The interior space is all open and the view is transparent and relaxing. Distinguishing the exterior space, a Mykonos Blue floor tile with a geometric pattern was used. It has a better breeze and brings visual pleasure. 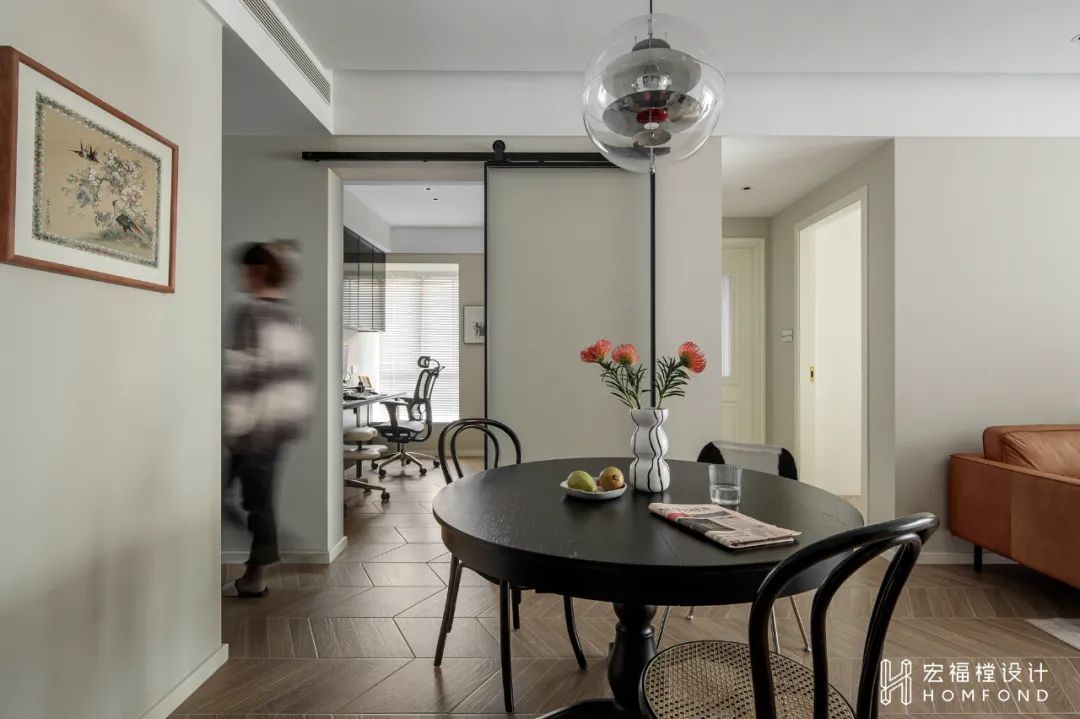 Every corner frame view and color and texture in the space brings an aesthetic response, but also plays its practical role. The designer caught the trick of making the space more open and bringing natural light from the study into the dining space. For storage, we designed a storage space with a length of 3070mm and a 2050mm length for the Murphy bed. It can be used as a second bedroom when there are guests visiting, while the usual activity space is not affected at all, making the study doubly functional. 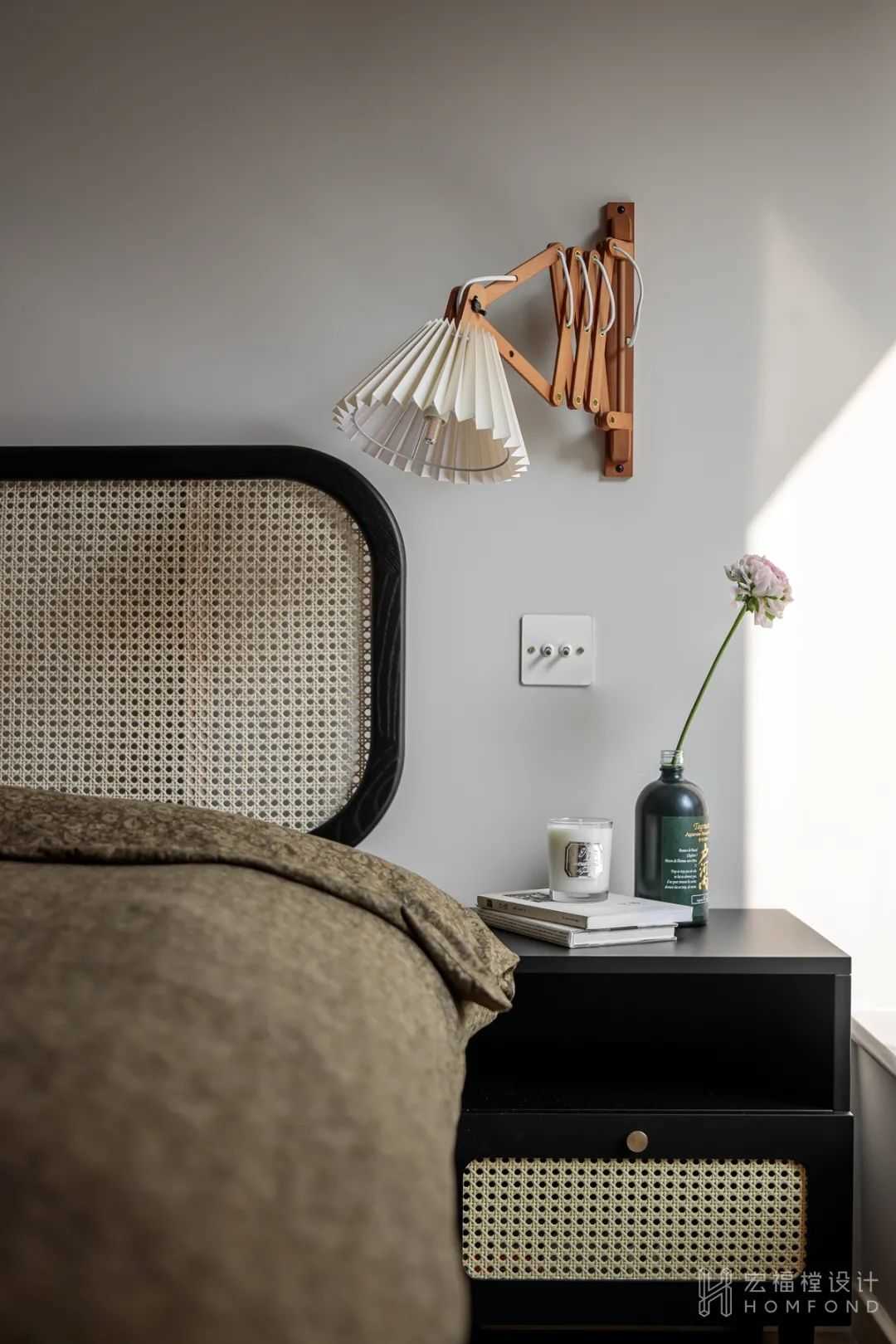 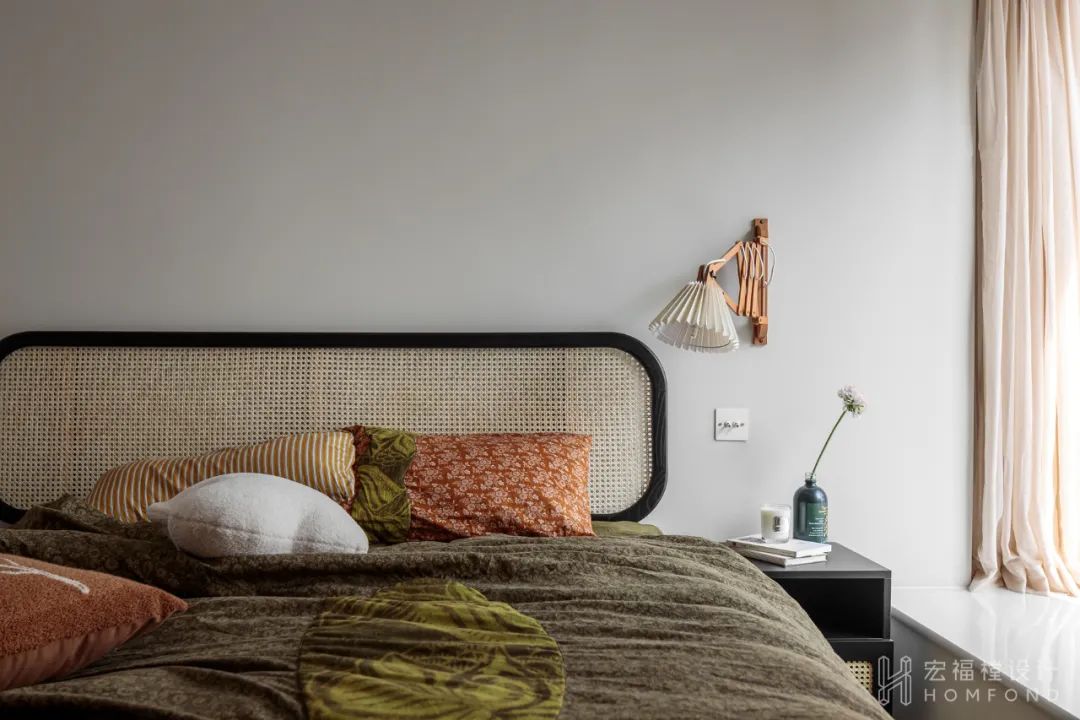 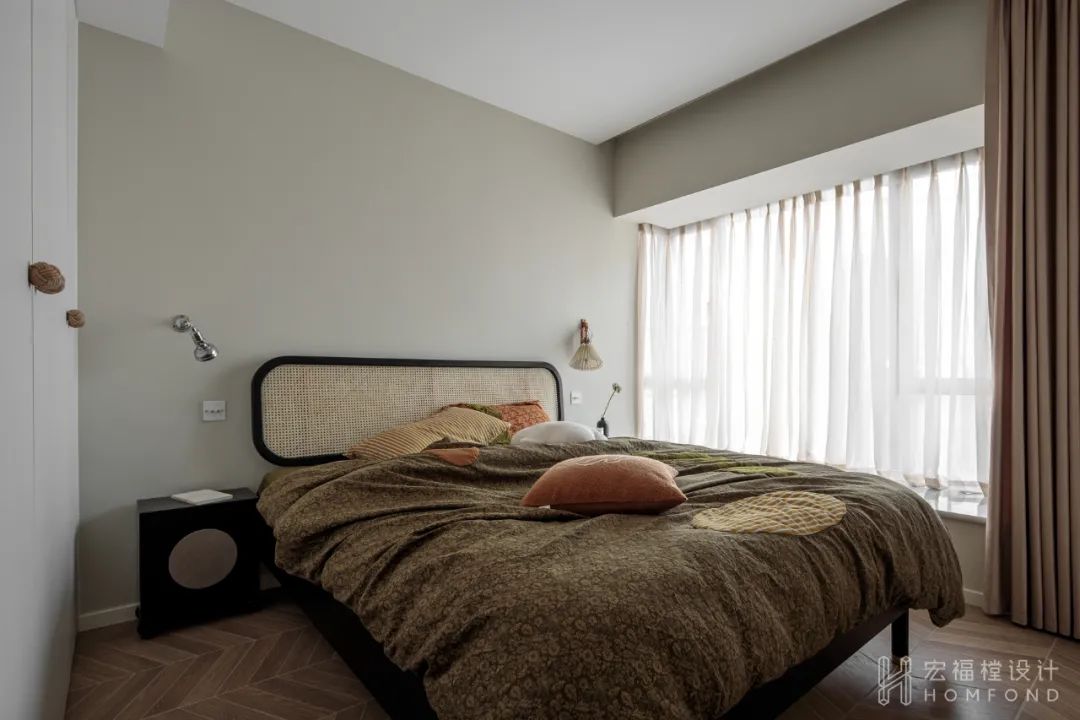 The original master bedroom was cramped, so after moving the wall and borrowing the exterior 220mm width, it was possible to achieve a storage space location. To create a comfortable and spacious space, the room was decorated with low-saturated natural colors to create a fresh and gentle atmosphere. The layout was then composed of low furniture and simply placed only their favorite small items. 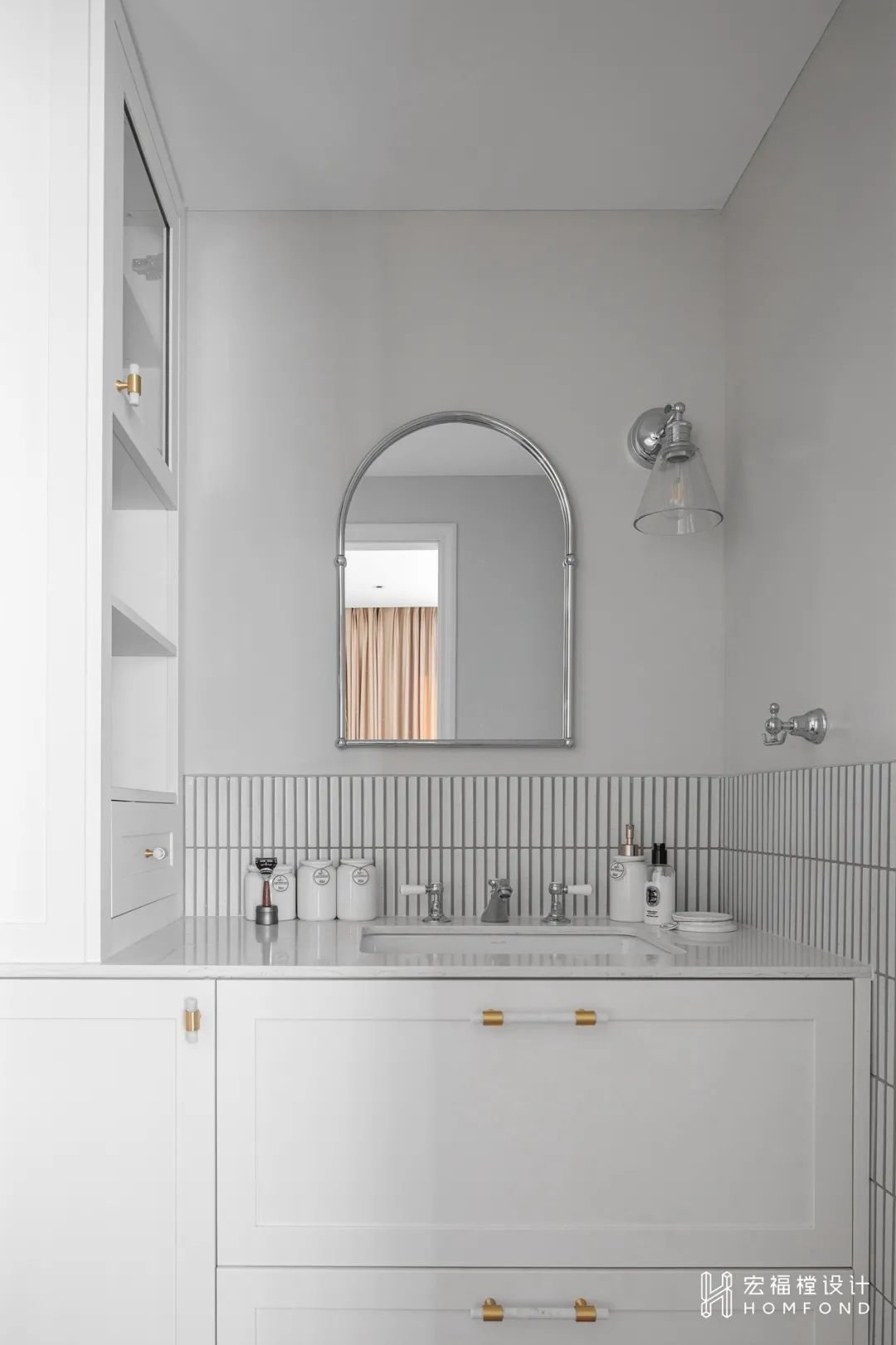 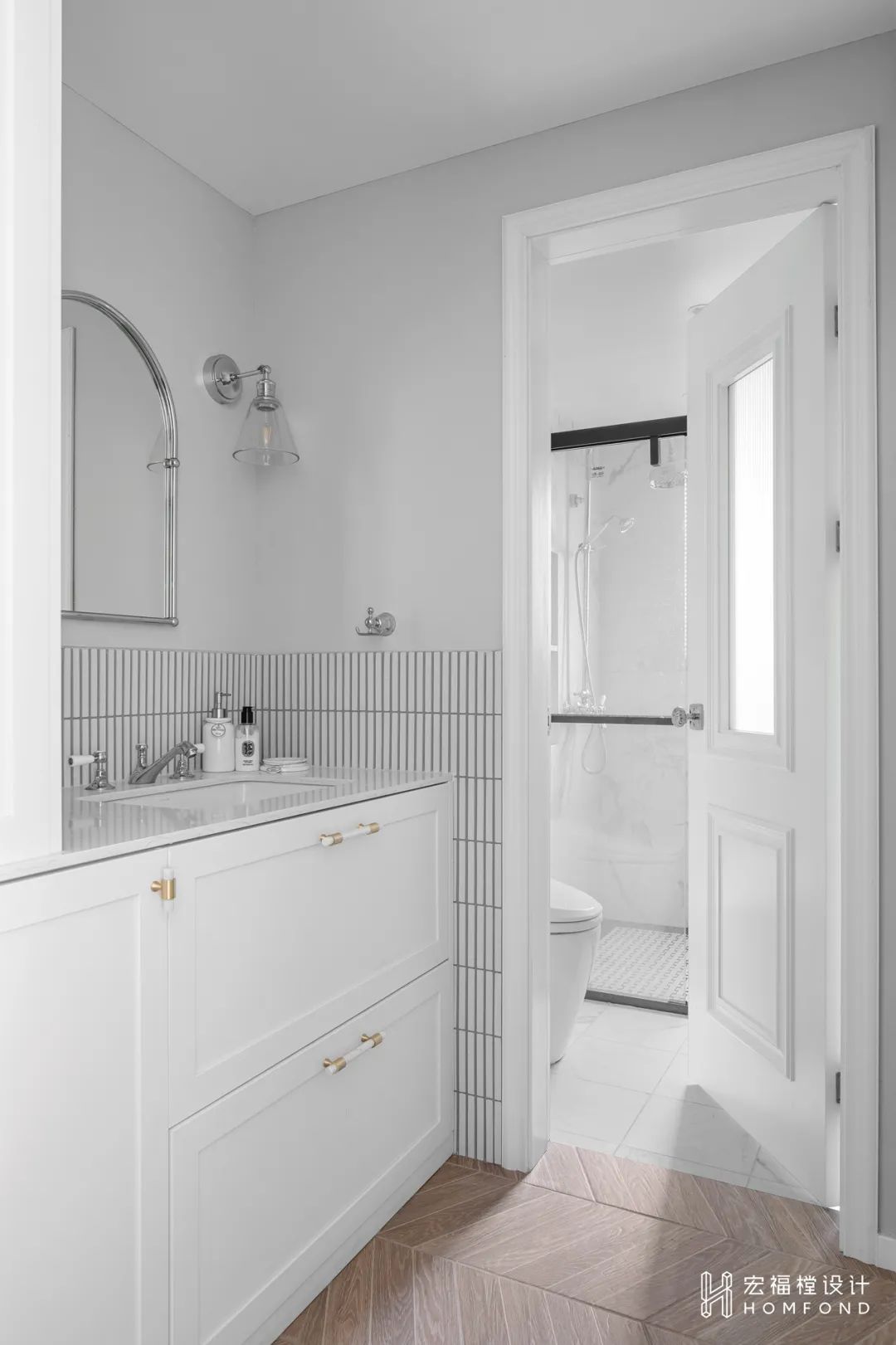 After moving the wall, the bathroom area was transformed into two separate wet and dry areas. According to the make-up habit of the female homeowner, a five-compartment storage space was designed for her to the left of the sink. The overall design is presented in bright white, with different materials used to divide the levels and finally adding metal to optimize the details. The design also visually extends the spaciousness of the space. 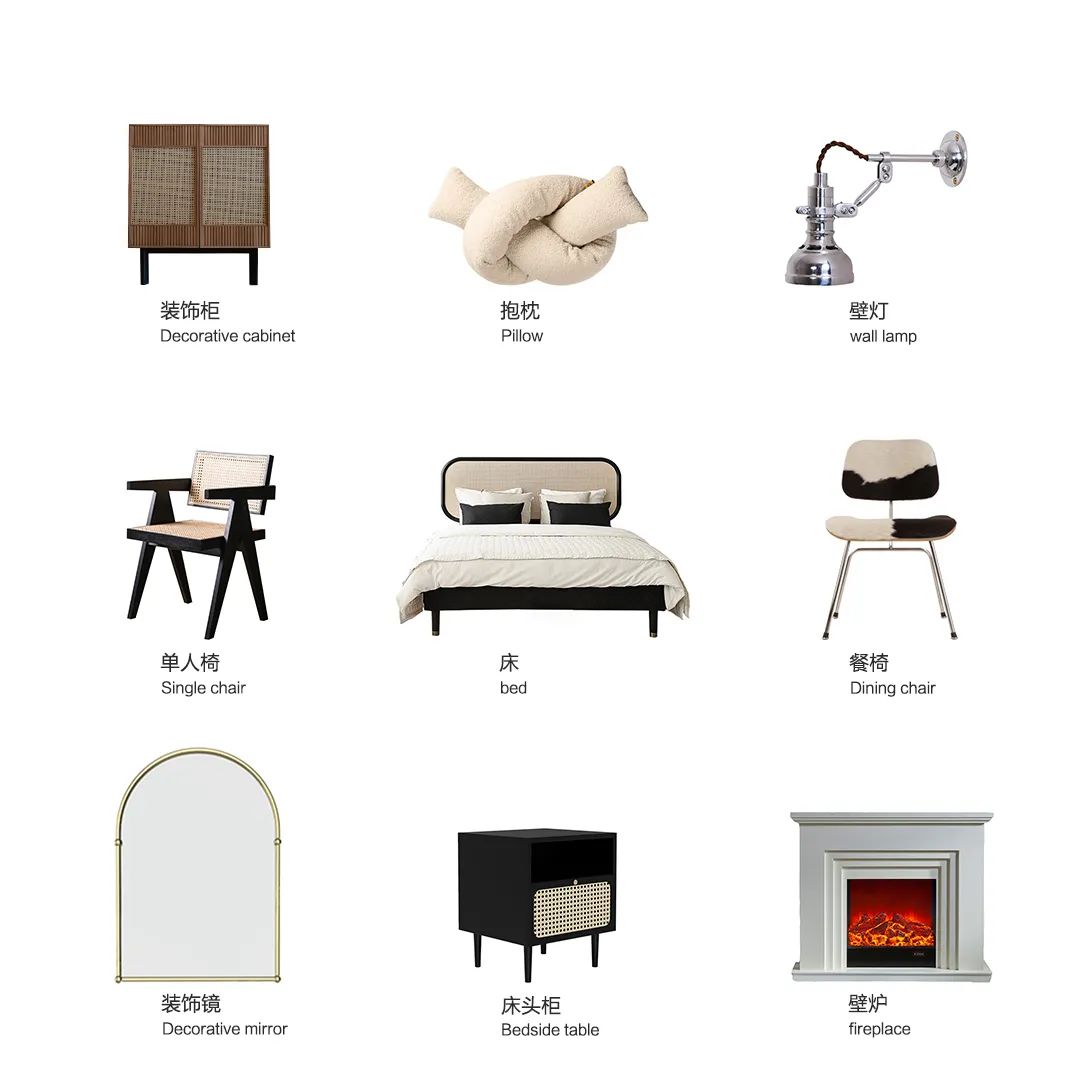 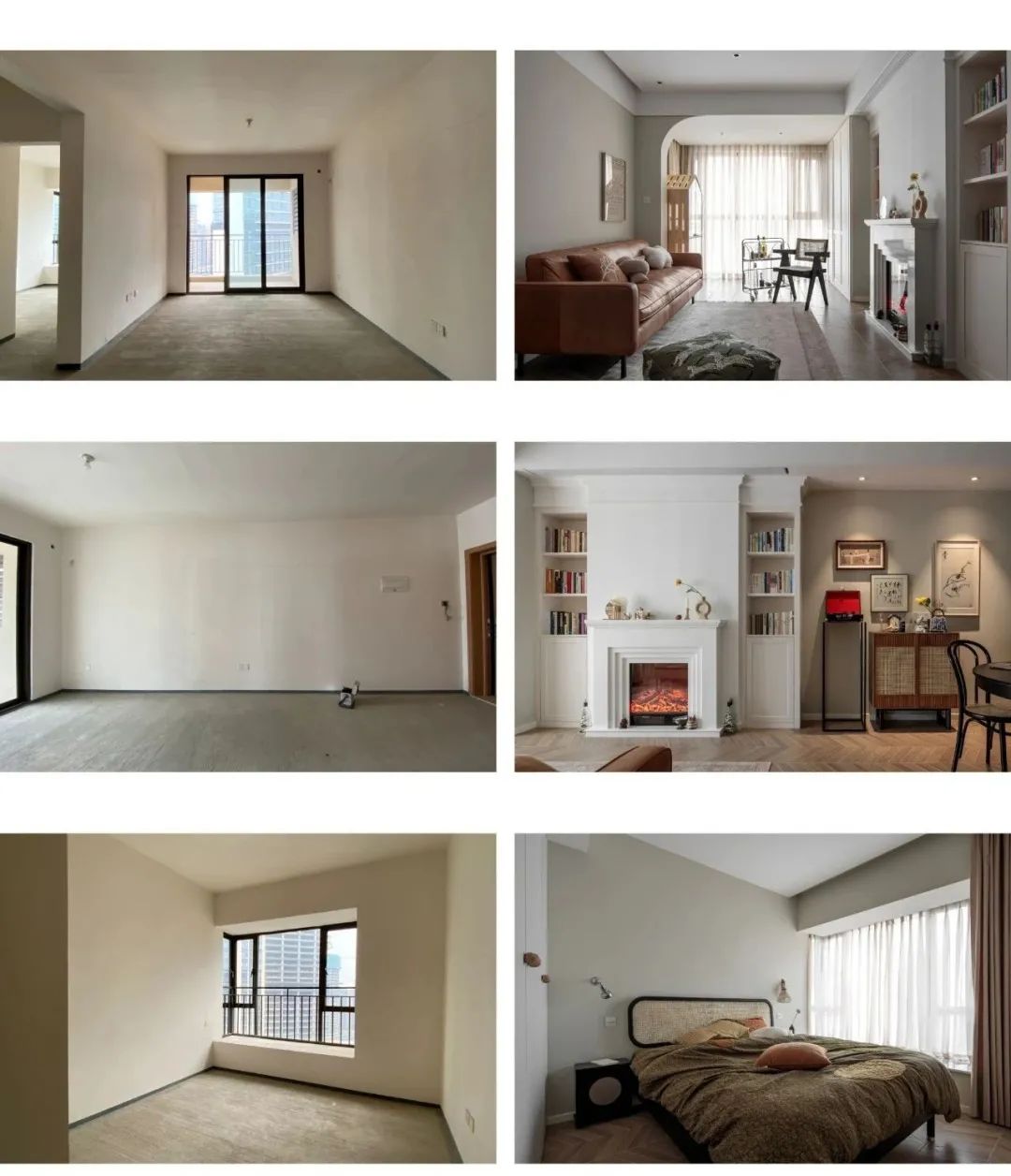 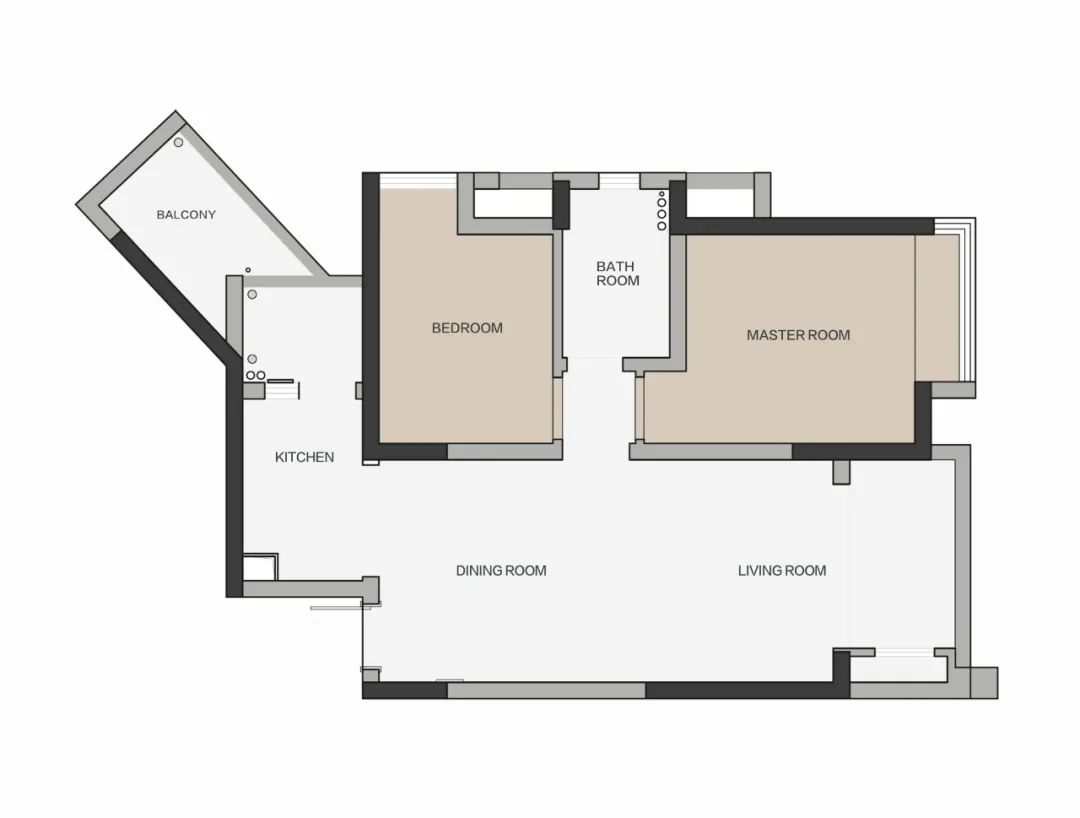 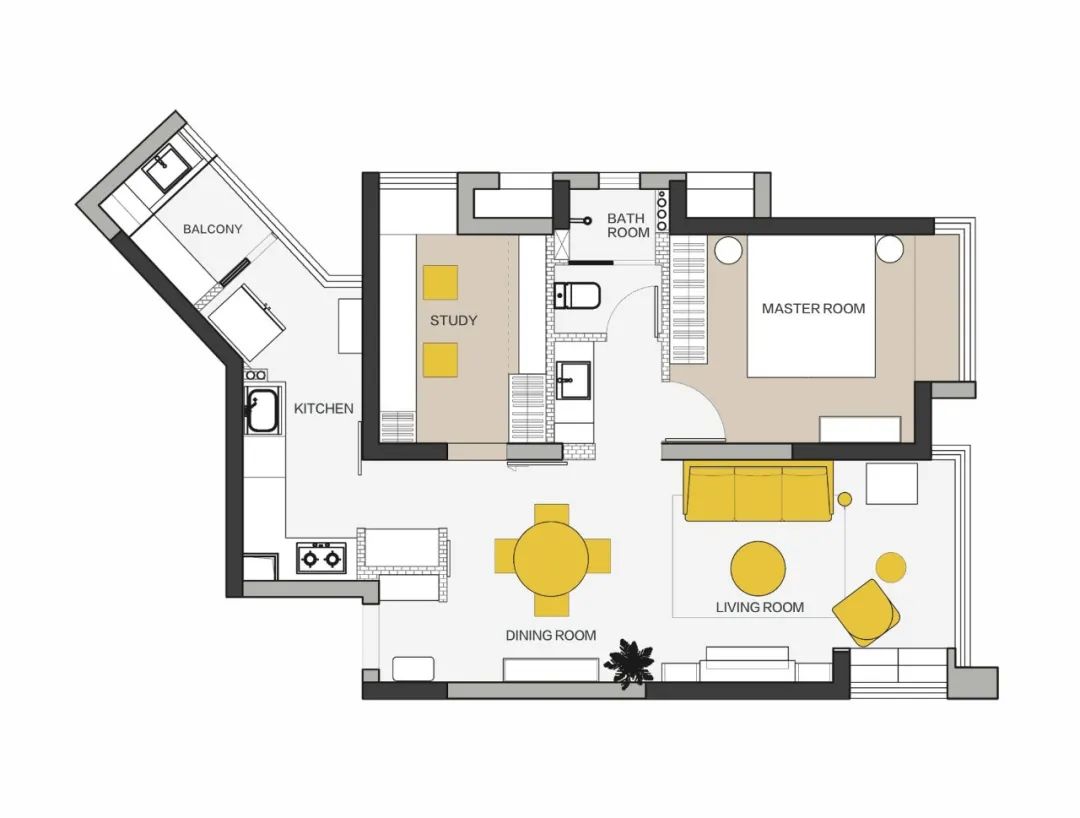