Sichuan And Chongqing Power Restriction Measures Have Increased. Some Enterprises Have Been Shut Down For 11 Consecutive Days

Recently, some provinces and cities to implement different degrees of power restrictions, and local sanitary ware enterprises production and operation were affected. Sichuan issued an emergency notice on August 14, requiring the implementation of August 15 to 20 production shutdown (except security load). In August 21, Sichuan launched an emergency response to the emergency energy supply security level, the power restriction measures to increase. In addition to Sichuan, Chongqing also issued a high temperature holiday notice to some industrial enterprises. They require designated regional industrial enterprises from August 15 to 24 to take “high temperature leave” to share electricity to the people. 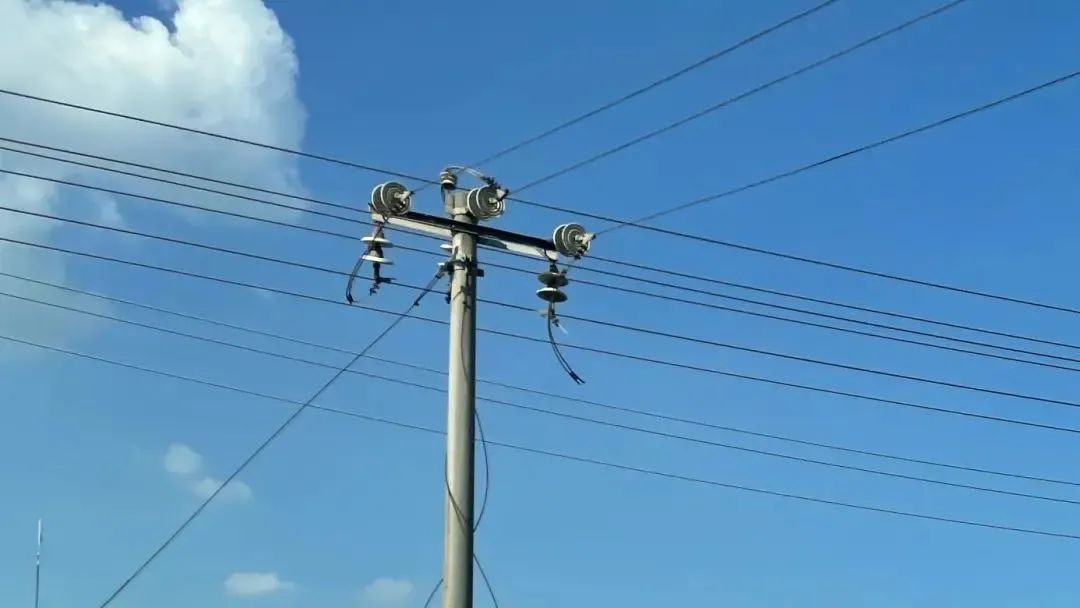 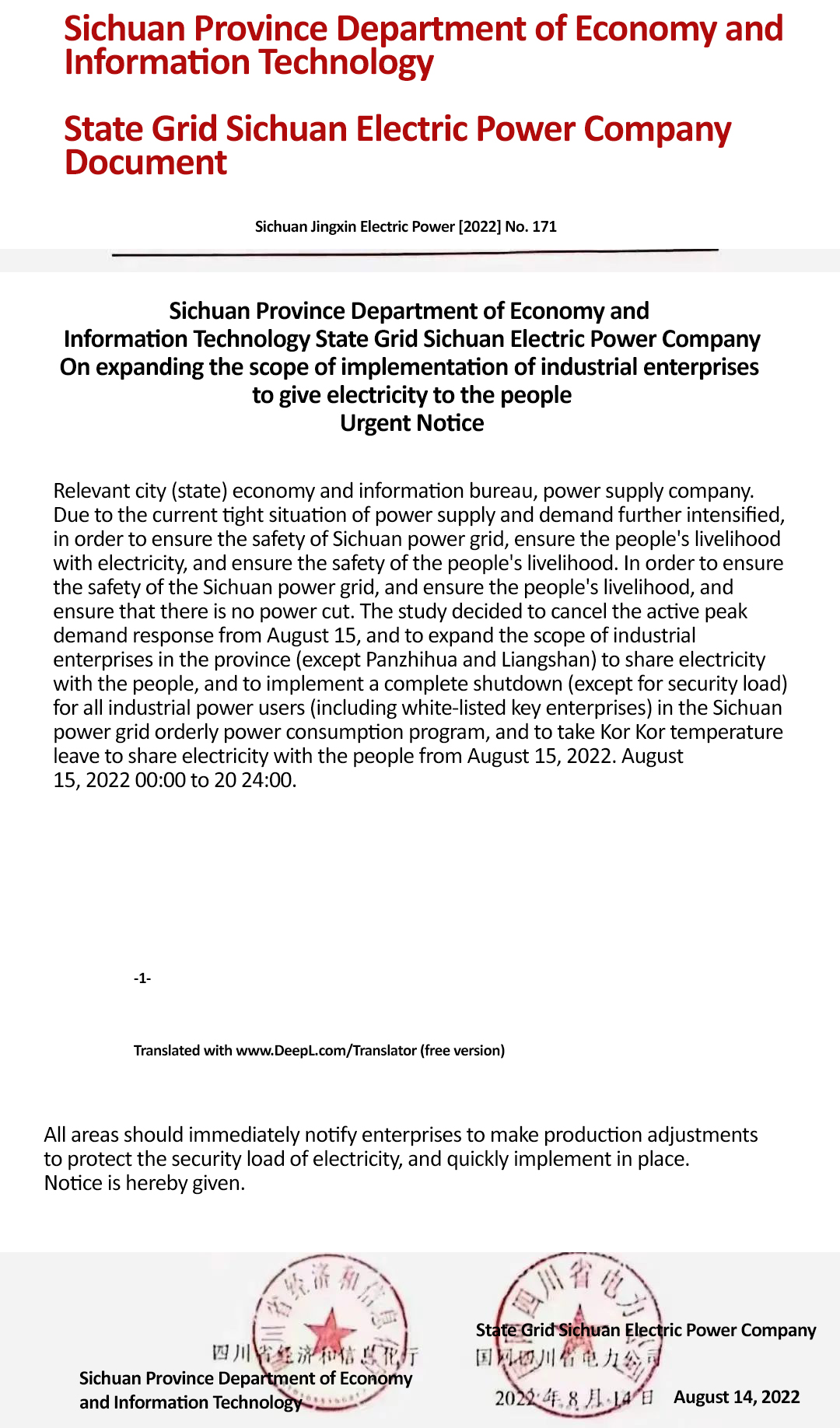 The power restriction measures have had an impact on the local bathroom enterprises. According to Diou Home’s “Announcement on the company’s impact by the power restriction policy” released on August 23. The company’s production base located in the Jiajia Street Industrial Development Zone in Chengdu East New District, Sichuan Province, as well as the production lines of the company’s wholly-owned subsidiary Chongqing Monarch Sanitary Ware Co., Ltd. and Chengdu Acrylic Panel Co., Ltd. have been affected by the tight power supply, and the relevant production lines have been operating at reduced loads as required. 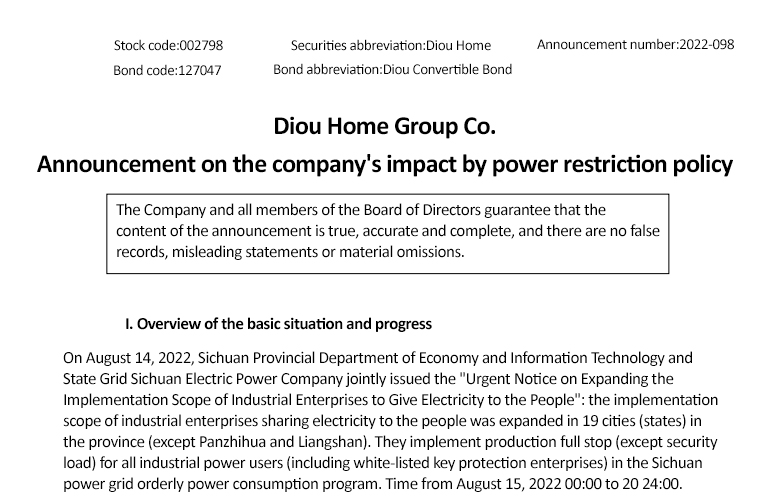 Monarch sanitary ware and Duravit where the production area is affected 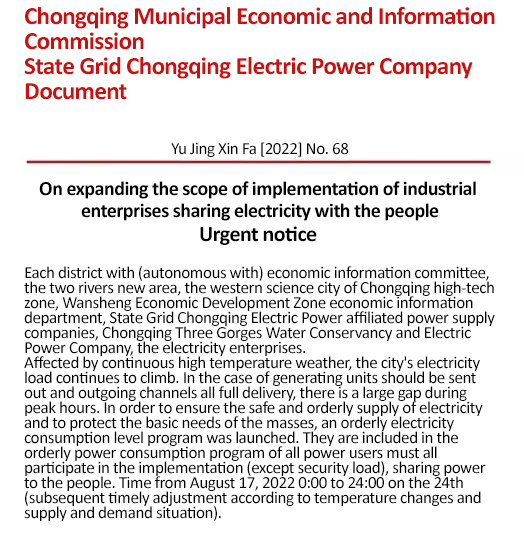 Because of the regional advantages, Chongqing has attracted a number of large bathroom enterprises to invest in setting up factories. For example, Diou Home has set up Monarch Sanitary Ware intelligent production base in Yongchuan National High-tech Zone. Duravit’s largest overseas factory is also located in Chongqing Jiangjin District. The factory can produce 1.5 million pieces of sanitary products per year. It is expected that the power restriction will have some impact on these companies.

In fact, before the implementation of the “high temperature holiday”, Chongqing has been part of the region to start the power restrictions. Beibei District, for example, had issued a notice on August 12, requiring enterprises within the jurisdiction of August 14 to 22 restricted electricity. This means that the power restriction time for industrial enterprises in some areas of Chongqing is August 14 to 24, up to 11 days. And in addition to Sichuan, Chongqing, according to market feedback, Zhejiang, Suzhou and other places also have some industrial enterprises that are required to limit electricity and production, but does not involve the ceramic bathroom industry.

Electricity supply continues to be tight

Part of the bathroom raw material prices shouted up

The impact of this Sichuan and Chongqing power restrictions have gone beyond the scope of business production, and thus the entire industry chain. There are raw material production enterprises that have started price increase measures to respond. 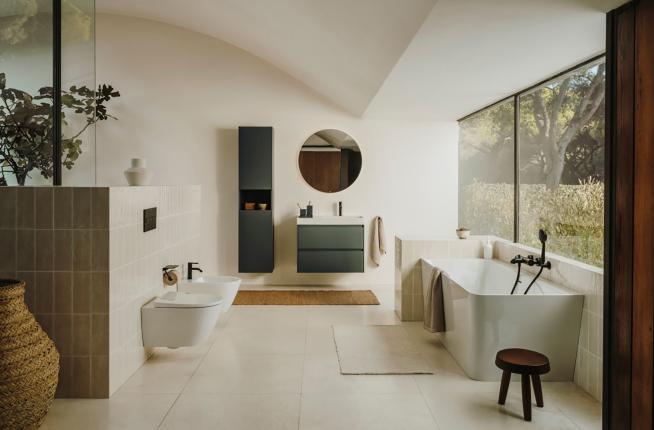 The most obvious is the price of titanium dioxide, one of the important raw materials for ceramics. Since this year, the price of titanium dioxide is stable, the trend is not obvious. But since August there have been several rounds of upward adjustments. In August 16, located in Panzhihua City, Sichuan Province, Panzhihua Titanium Sea Technology Co., Ltd. issued a letter to increase prices, including rutile / anatase titanium dioxide for domestic customers by 500 yuan / ton, for international customers by $ 80/ton. Titanium Sea Technology, also located in Panzhihua City, Sichuan Province, also increased the prices of some products. And they raised RMB 500/ton for domestic customers and USD 80/ton for international customers.

Other non-ceramic uses of raw materials have also increased prices. According to the Observer, power restrictions in Sichuan led to production disruptions at the local plants of Tongwei Group and GCL-Poly, the world’s leading polysilicon producer of key raw materials for solar energy. This has pushed up the already tight supply and soaring prices of polysilicon to intensify. There have been a number of solar energy supply companies to raise product prices.