HOUZZ, a U.S. home services website, releases an annual study of U.S. bathroom trends, and the 2020 edition of the report has finally been released. This year, HOUZZ surveyed 1,594 U.S. homeowners who had just renovated their bathrooms in the past year about which products they chose and what changes they made when they did so. The results can be summarized as follows: Rest and Recreation, High-Tech, Lighting Features, Accent Wall, Modern Mix, and more. 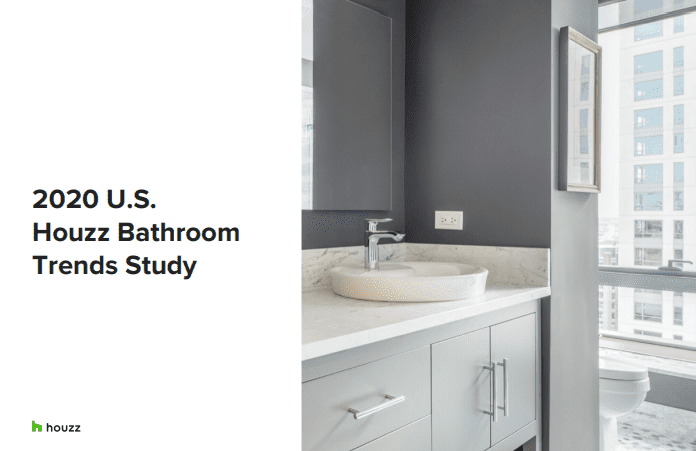 ▌Conversion Of Baths To Showers

A growing number of American homeowners view the bathroom as a place to relax, with 41% of the 1,594 homeowners surveyed saying that they rest and relax in the bathroom. The main ways to relax are soaking and showering, with 55 percent of respondents saying soaking in a bathtub helps them relax. 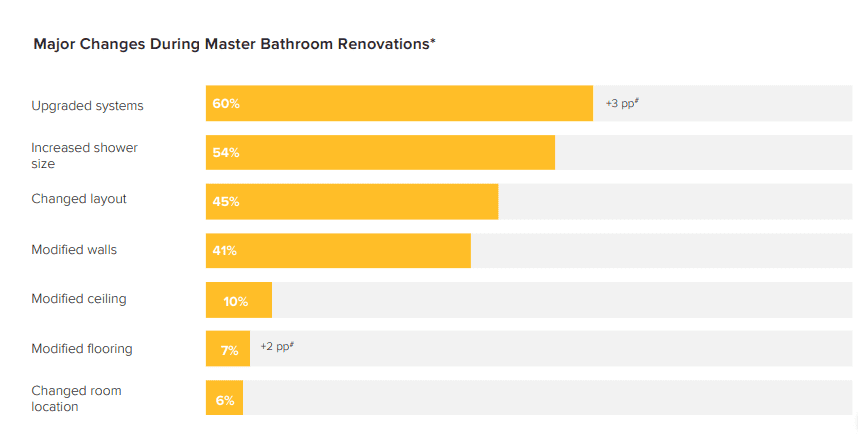 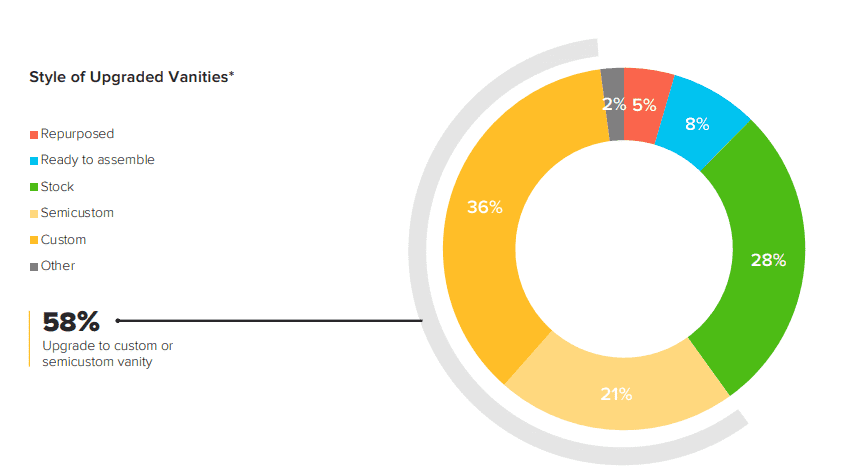 This year, 17 percent of U.S. homeowners who chose to switch to a toilet with a nozzle, up 5 percentage points from last year; 14 percent and 13 percent of respondents, respectively, chose toilets with self-cleaning features and heated seats, which are also equipped with smart toilets. In addition, anti-splash, built-in night light, automatic lid flip, automatic deodorization and other features also attracted attention. 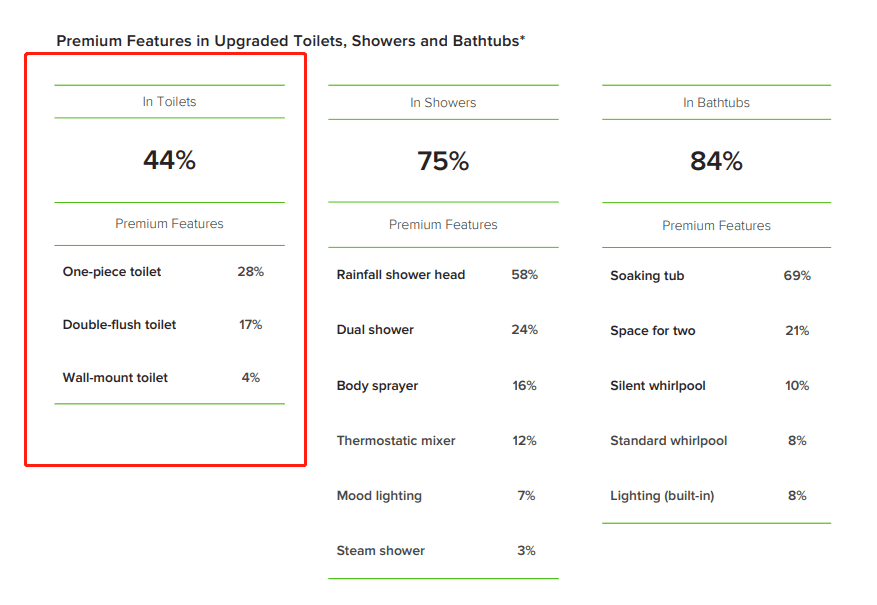 The popularity of the various features of the basin was essentially unchanged from last year, with the largest number of U.S. homeowners choosing to replace their basin with an undermount (65%), followed by recessed (17%) and countertop (9%) basins. In addition, 68% also chose to use a double basin, which is about the same percentage as the previous two years. 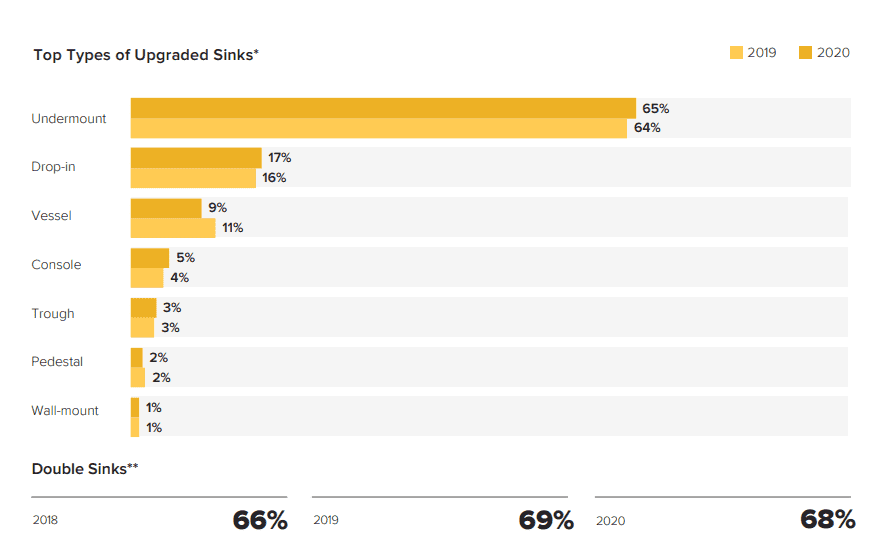 Eighty-seven percent of all respondents replaced their faucets. Of those who replaced their faucets, 48 percent of homeowners had at least one new faucet with a high-tech feature. Among them, 28% of respondents’ new faucets have water-saving features, 4 percentage points less than last year; 16% of owners of new faucets do not stick fingers; 5% of the new faucets can be touch-free, this number increased by 2 percentage points over last year, showing that sensor faucets are increasingly popular.

▌Tile Is Still The Mainstream Of The Shower Area 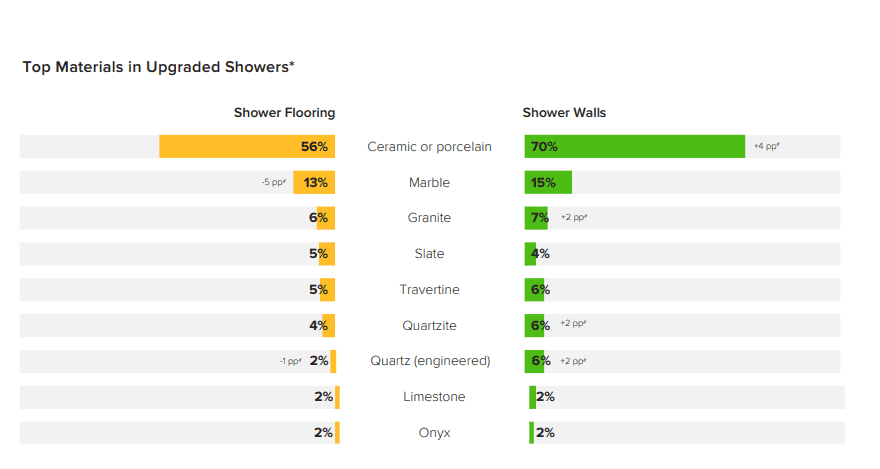 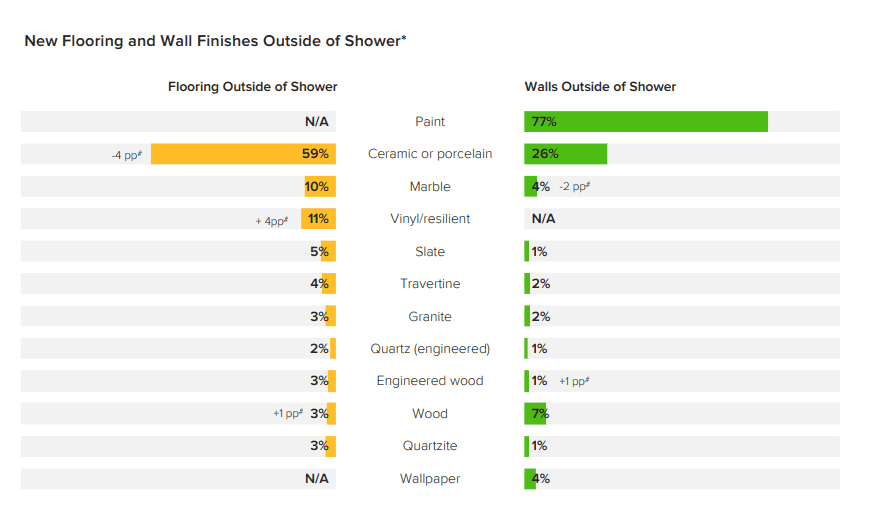 This year, 20 percent of respondents said they would choose a contemporary style for their bathroom, the same number as in 2019 and 5 percentage points higher than in 2018, showing that modern style remains the dominant style in American bathroom design. This compares with 18 percent of homeowners choosing Transitional, down 3 percentage points from 2019, while the number of people choosing Contemporary, Traditional and Pastoral are all more stable and up from last year. 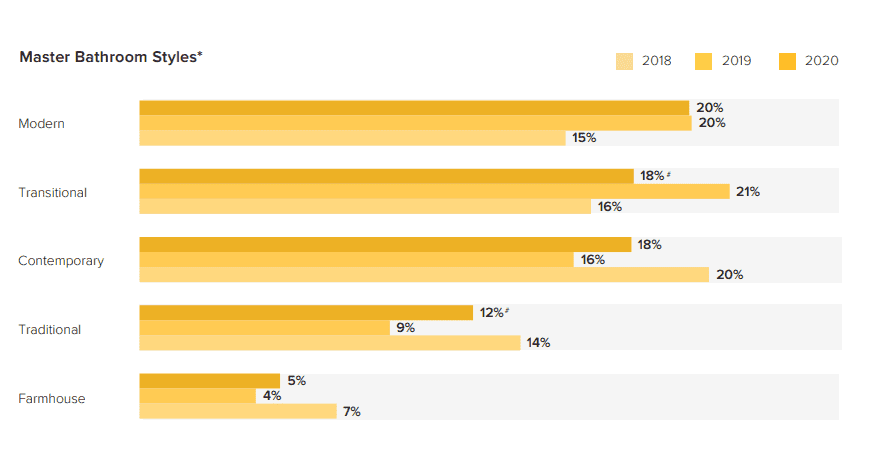 In terms of colour, white remains the dominant colour, with more people choosing white as the main colour for bathroom cabinets, countertops, shower walls and general walls. On countertops, more than 51% of respondents chose white, ahead of color (15%), gray (14%) and beige (9%), with the number of respondents who chose color dropping by 4 percentage points. 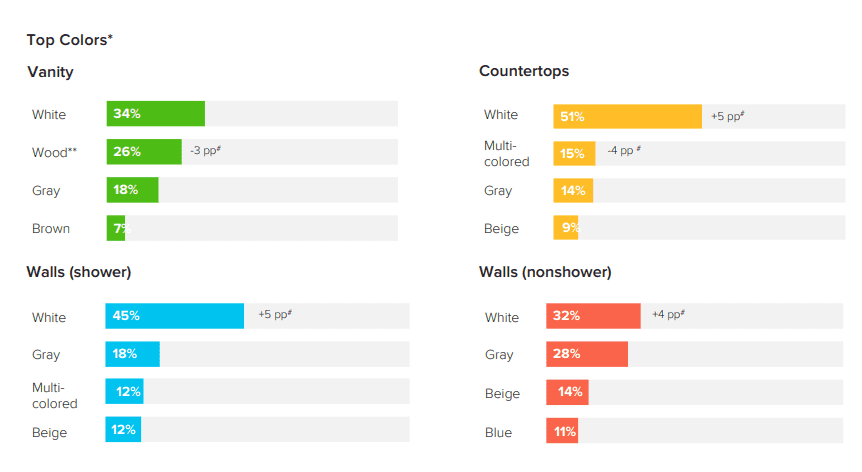 ▌8 Out Of 10 Respondents Chose To Change Their Bathroom Lighting.

This year, 8 out of 10 respondents chose to update their bathroom lighting. Among them, the largest selection of wall-mounted lamps (58%) and recessed lighting (55%), followed by shower lights (32%), fan lights (25%), mirror lights (17%), of which the selection of mirror lights increased by 4 percentage points over last year, worthy of attention of bathroom cabinets and bath mirror manufacturers. 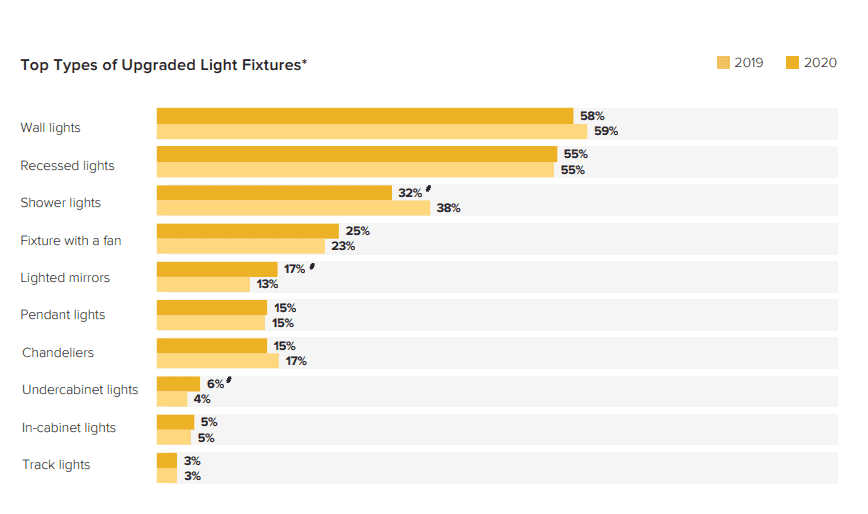 2, Before renovating the bathroom, 69% of respondents said they were already dissatisfied with the old bathroom, up from 59% in 2019.

4, 59% of respondents said they would relax in the bathroom, an increase of 4 percentage points from last year.

5, About three-quarters of respondents have two or more mirrors in their master bathroom.

6, Four-fifths of respondents would hire a professional to help renovate their bathroom, with renovators having the highest participation rate at 43 percent, followed by bathroom fitters (20 percent) and bathroom designers (12 percent).

Previous:: Picked By NASA, These Three Toilets Are Going To The Moon! Next: What To Do When Buying A Kitchen Faucet
Related suggestion