The future as we understand it

It’s the relationship between humans and nature.

Including light, air and landscape

The past – an industrial town in the northwest

When you look down on Lanzhou from above, the rolling hills beneath the clouds are a thirsty yellow, the Yellow River runs through the city, and the long, narrow city of Lanzhou looks as if it has been cut down by a knife and an axe. The desert Gobi, the snowy plateau, the bony loess slopes, the warm, wide river valleys-every imagery you can think of for the Northwest is associated with Maryland, indirectly or directly.

The relocation of the Bureau of Machine Building to Lanzhou in 1869 ushered in a new era of modern industrial production in Lanzhou.

In 1952, the Lanzhou City Construction Plan was issued, providing a design for the transformation of the city’s development position from “industry as a secondary” to “industry as the main”, and the “First Five-Year Plan” ( During the period from 1953 to 1957, Lanzhou was selected by the state as one of the eight key industrial cities for construction. The image of a large industrial city was constantly reinforced, countless tall chimneys were erected in the Yellow River Valley… The population continued to pour in, trains carried north and south into this land of yellow sand, Lanzhou was not only an industrial town with chimneys erected in the Yellow River Valley, but also the largest railway hub of the road network in northwest China. 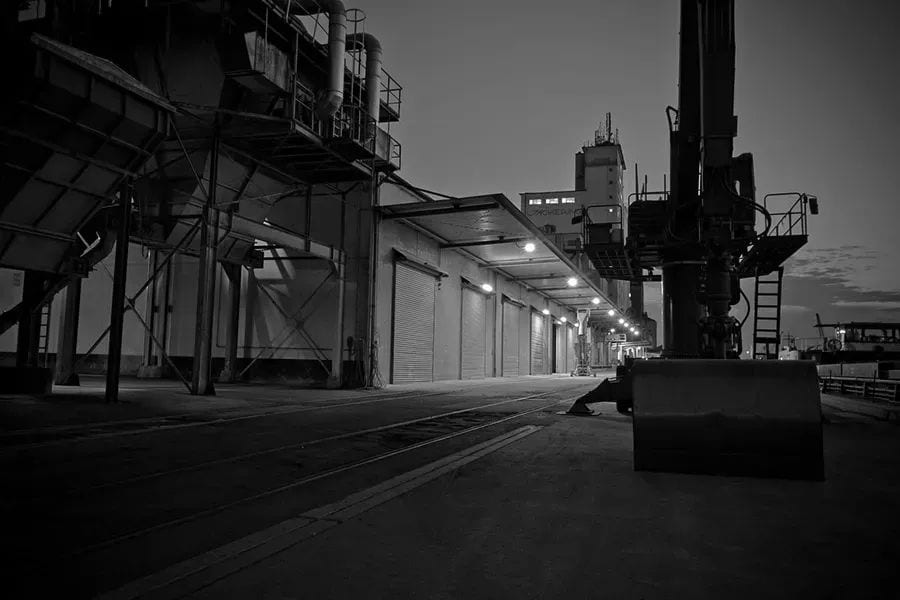 In 2019, the Lanzhou Locomotive Diesel Depot retreats into the park, Lanzhou’s first industrial heritage park, China Railway Gleaner Park and Lanzhou China Railway Shared City appear in front of everyone. Time and memory began to overlap and split, the sandy desert camels fell apart, the sturdy red chimneys on the loess wasteland became a blurred background, and the very distinctive modern deconstructivist architecture opened a new era in the memory of the long desert river.

The building in the display area is a brand new one. A new steel-framed house, with interlocking sloping roofs, large glass facades, and part of a traditional hand-built red brick wall, is both contemporary and industrial. 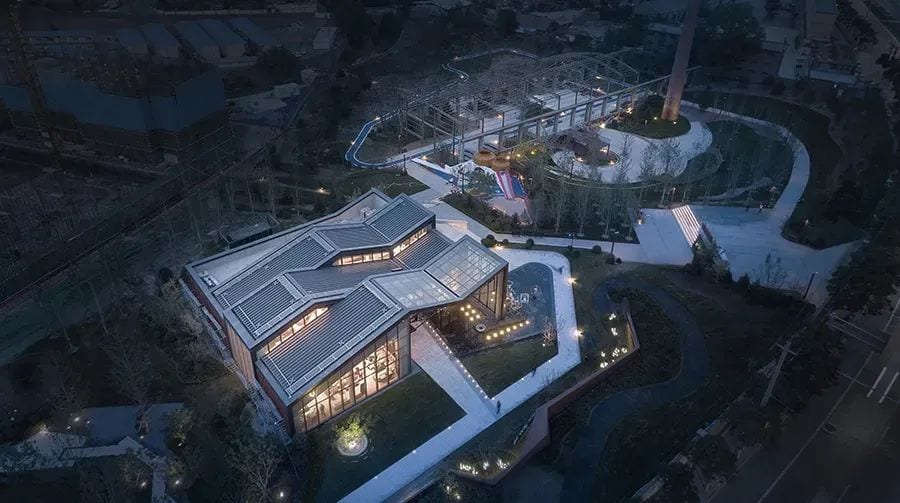 The future – space as a relationship between humans and nature

It is not easy for plants to survive in the thirsty yellow of the Northwest. The building is adjacent to Gleaner Park, where 55 trees over 30 years old have been transplanted to enrich and complement the existing landscaping, in order to preserve the testimony of the old factory trees to the industrial prosperity of the past. The park has an entire landscape of rare trees in the northwest.

In the park, there are towering chimneys, all-steel old factories, and preserved locomotive parts, which are heavy with industrial elements, witnessing the changes of the city, as well as dappled tracks, connecting the past with the future.

Therefore, the design concept of the entire interior decided to follow the characteristics of the building, extracting elements from the building structure, through deconstruction and evolution, combined with the current lifestyle, using contemporary design techniques to integrate space and function, space and architecture, space and landscape, interpreting it as a dialogue with the future. 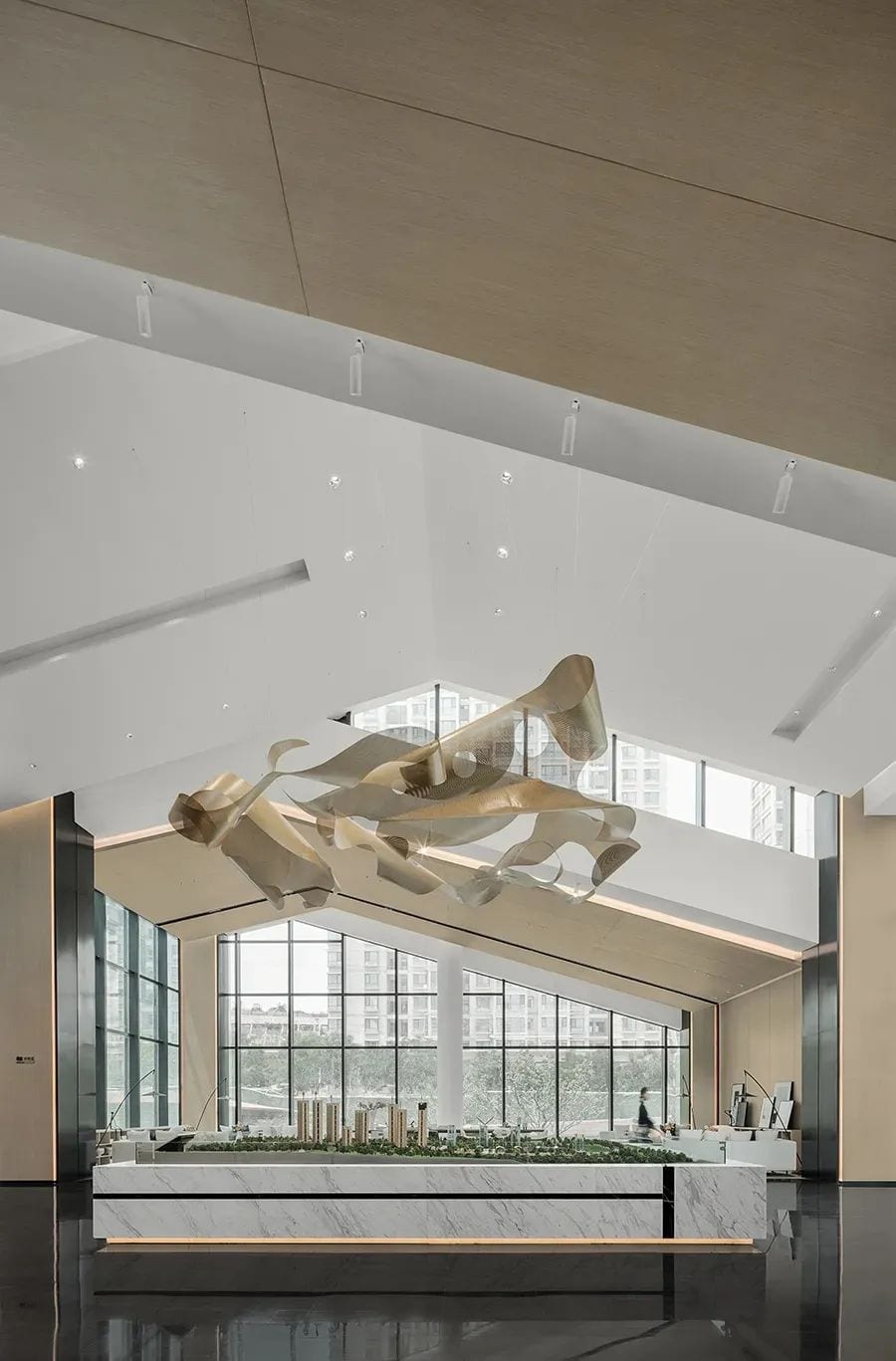 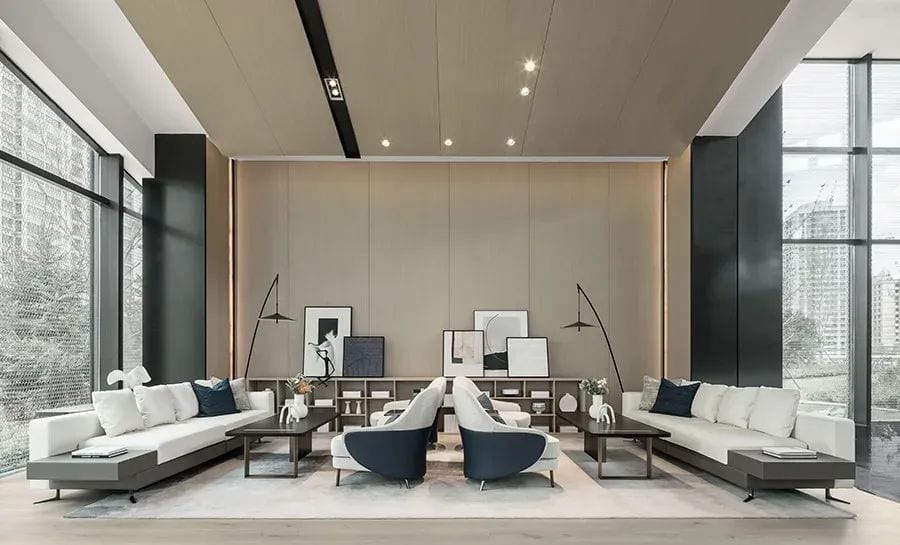 It’s still early and the city is just waking up.

The tone of the space in the reception area is black and white, unfolded in warm woodwork colors, adding a hint of warmth and coziness to the vast, rough neutral color relationship, and a delicate side to the roughness.

All the ceilings are painted in white latex: the white, large sloping ceilings are staggered, and the whole piece of black stone flooring and dark gray flowing stone make the textures of the materials collide, highlighting the Northwest temperament. 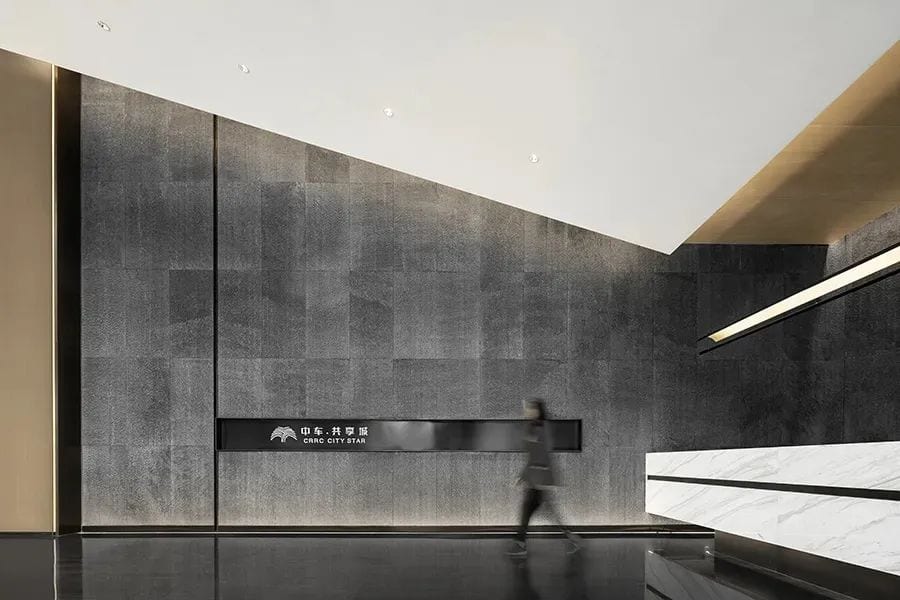 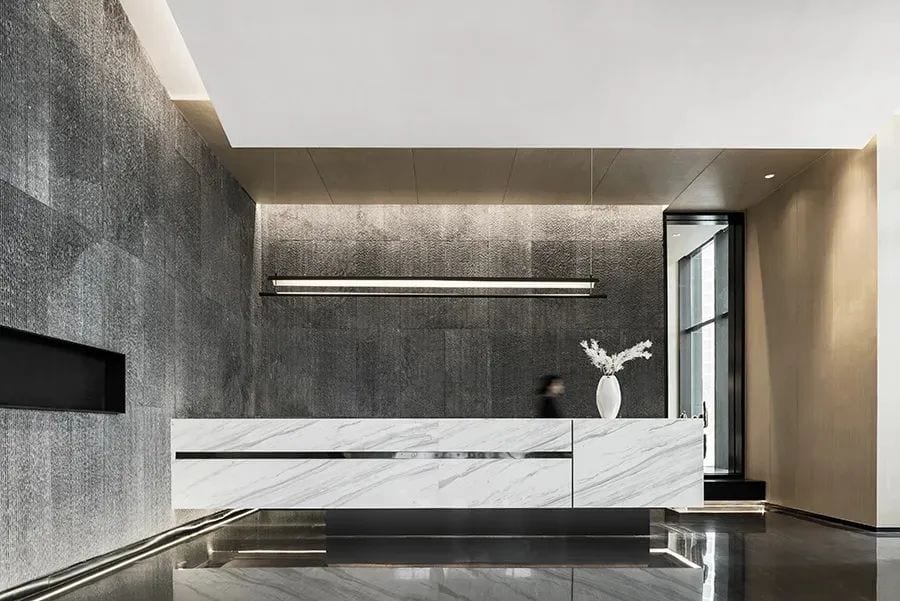 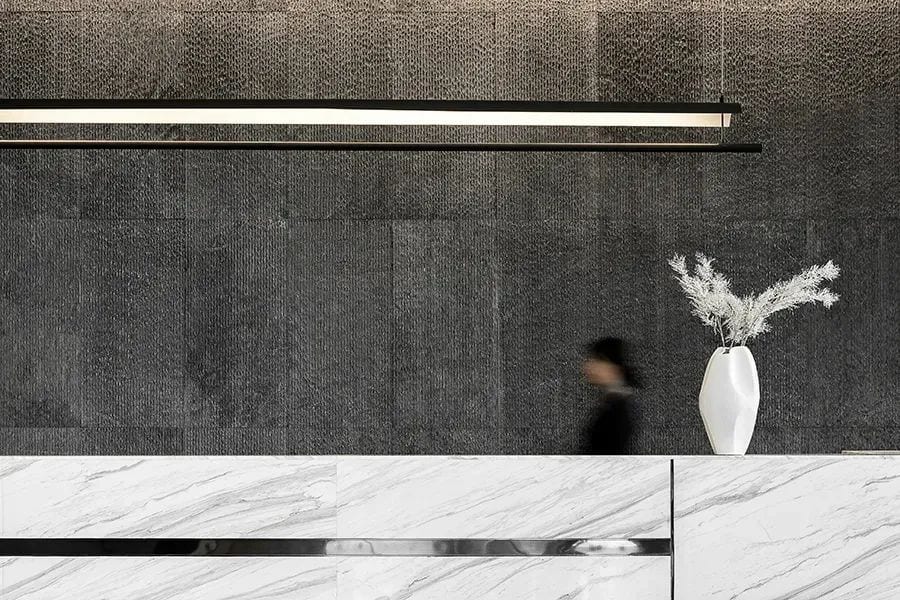 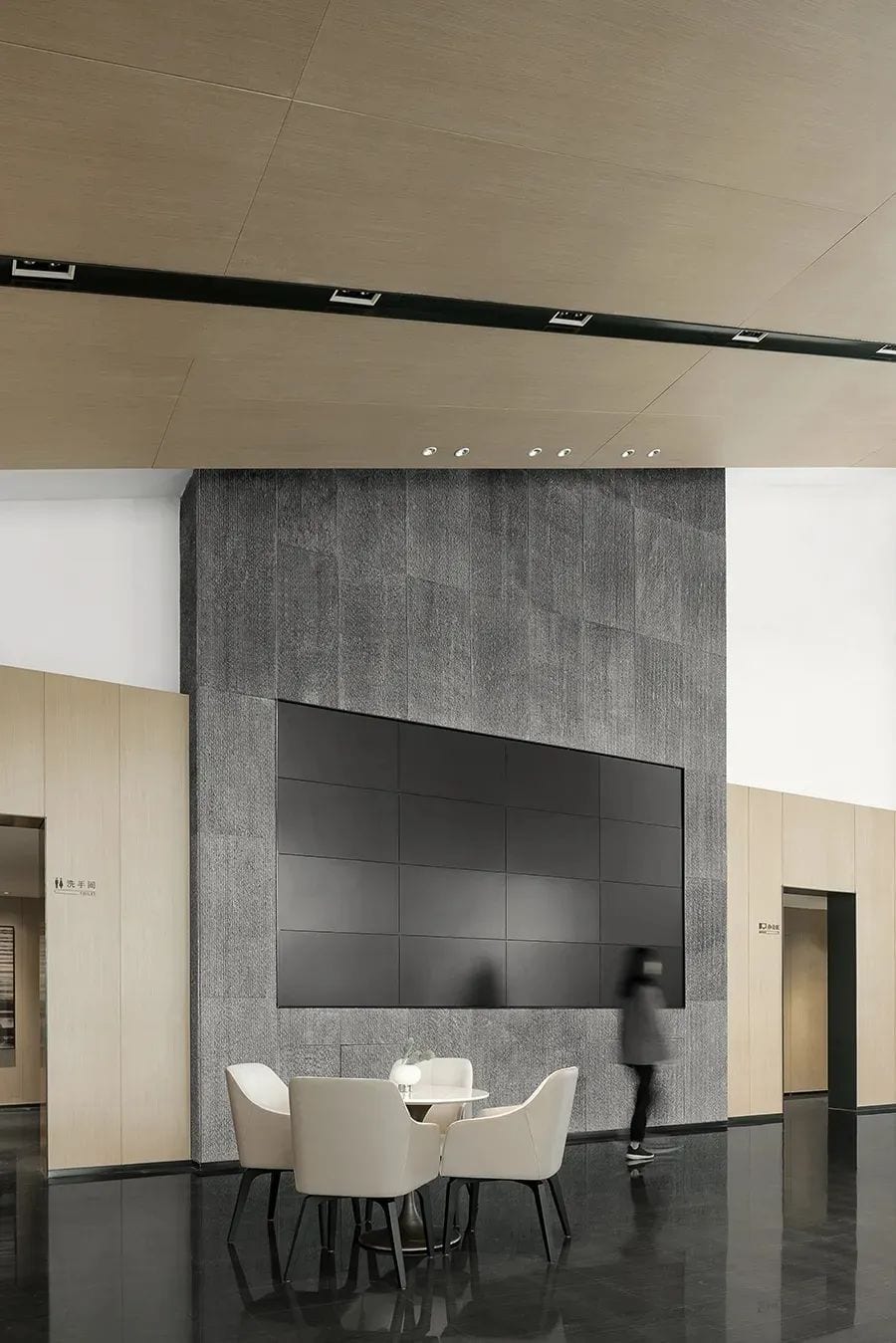 The building is as vast as the city. The old factory building is open and bright, with a ceiling height of 8.2 meters at its highest point and 3.8 meters at its lowest. Outside the windows there are rare green plants and abundant sunshine, in the use of light sources, the designer adopted a different point of light to meet the irregularities of the building’s ceiling, abandoning the traditional method of surface light, but used large floor-to-ceiling glass windows and ceiling skylights to borrow light and scenery to form surface light.

This large surface design not only gives the space a more advanced feel, but also a design approach to dialogue with the light, scenery and shadows in nature.

The metal wire mesh art installation echoes the wire mesh of the building, but is lighter and more transparent, breaking the stereotypical influence of the cold, hard metal. 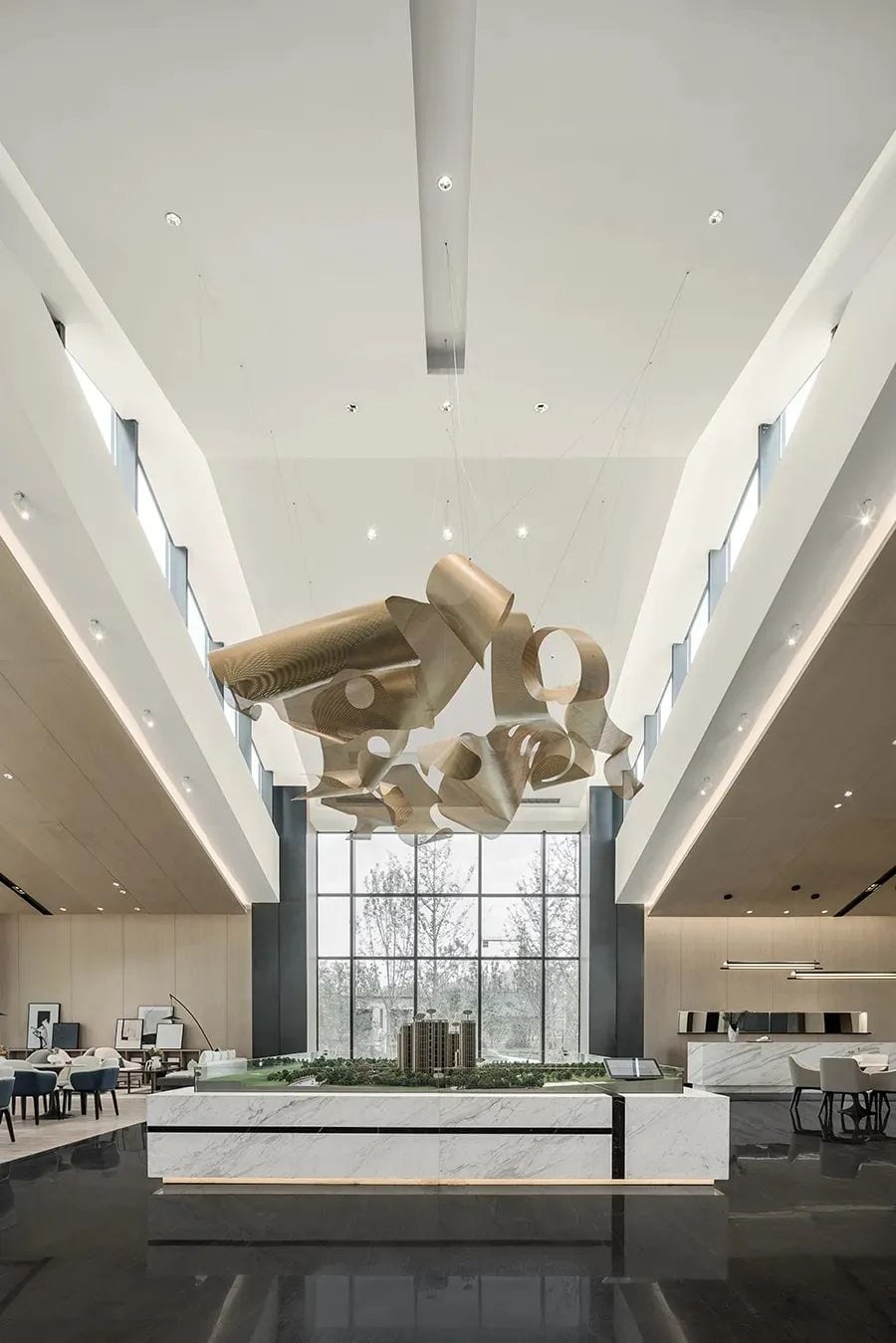 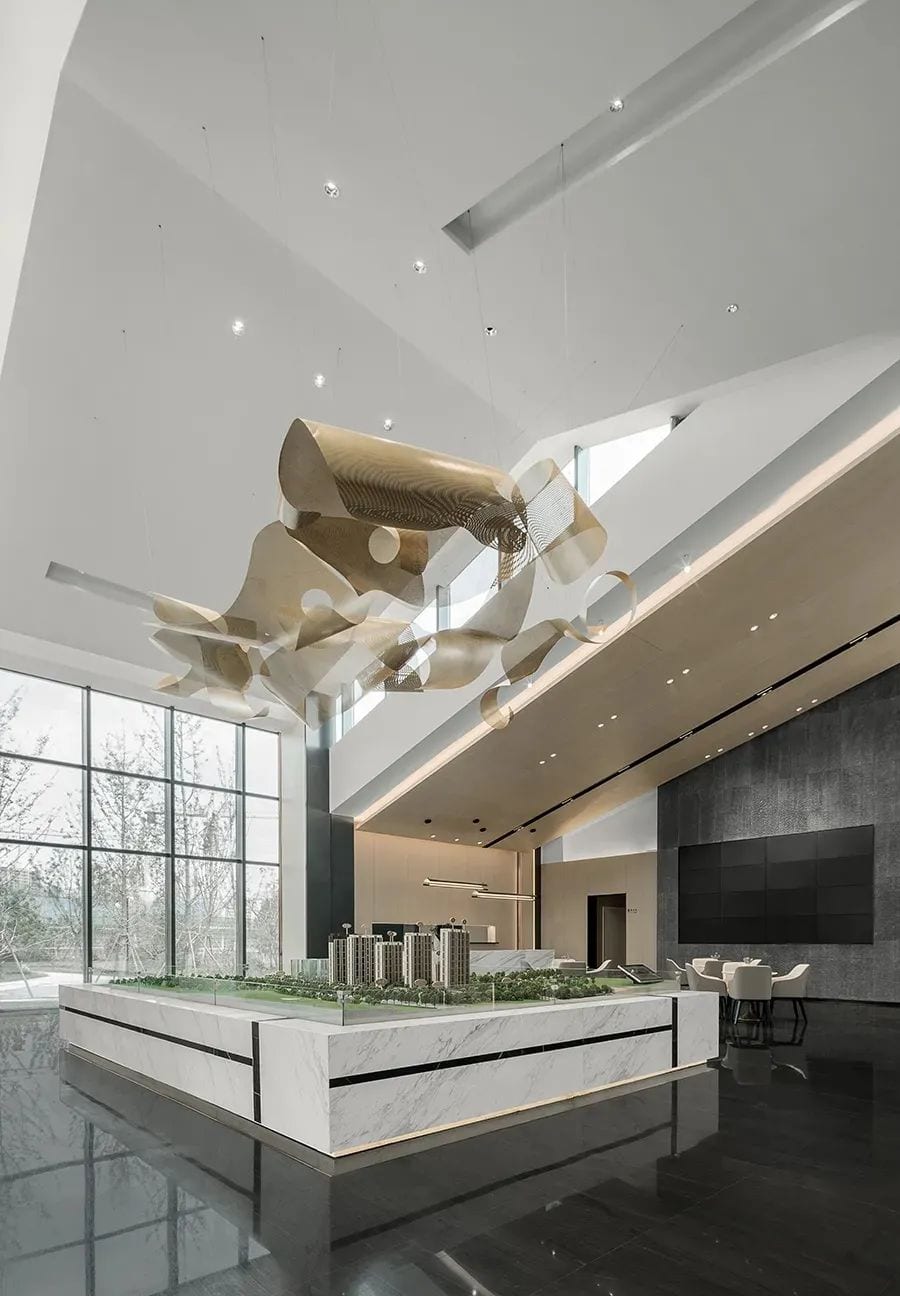 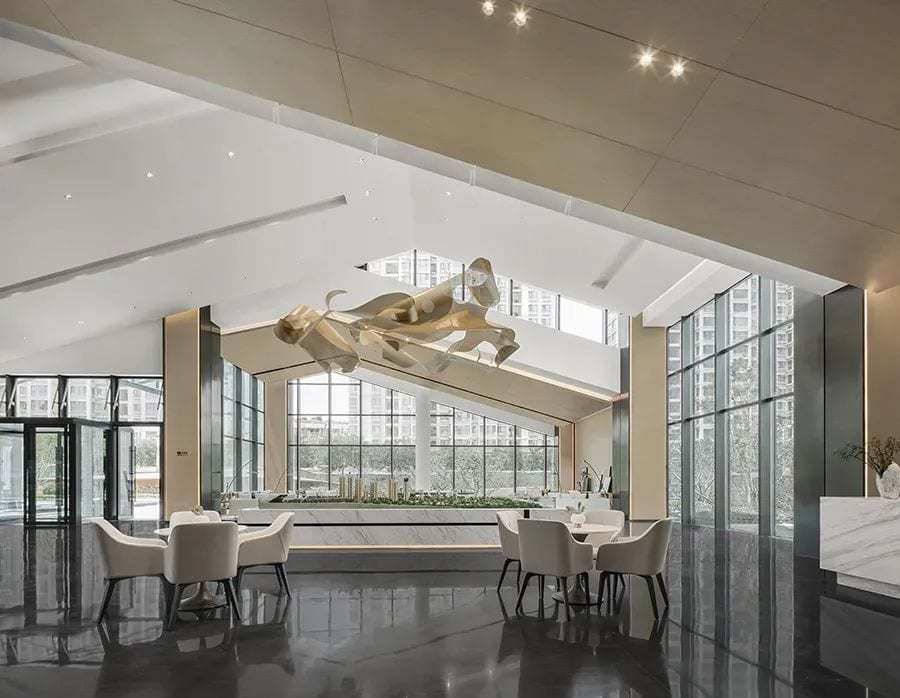 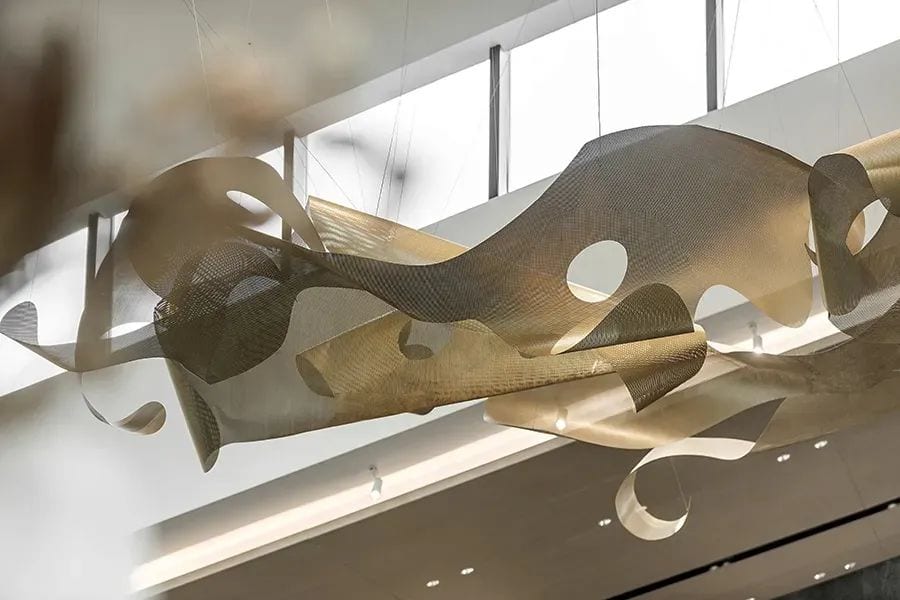 The book bar has a square column against the window, a necessary addition to the factory building. The designer wrapped it in a cylindrical shape, painted it with white texture paint, and disguised it as a fireplace, echoing the massive chimney outside the building.

A skylight on the sloping roof lets in sunlight at every hour of the day, while humans can experience the dimensions of the open space like a sundial, following the measured day’s shadow along the massive 15-meter-long bookcase. 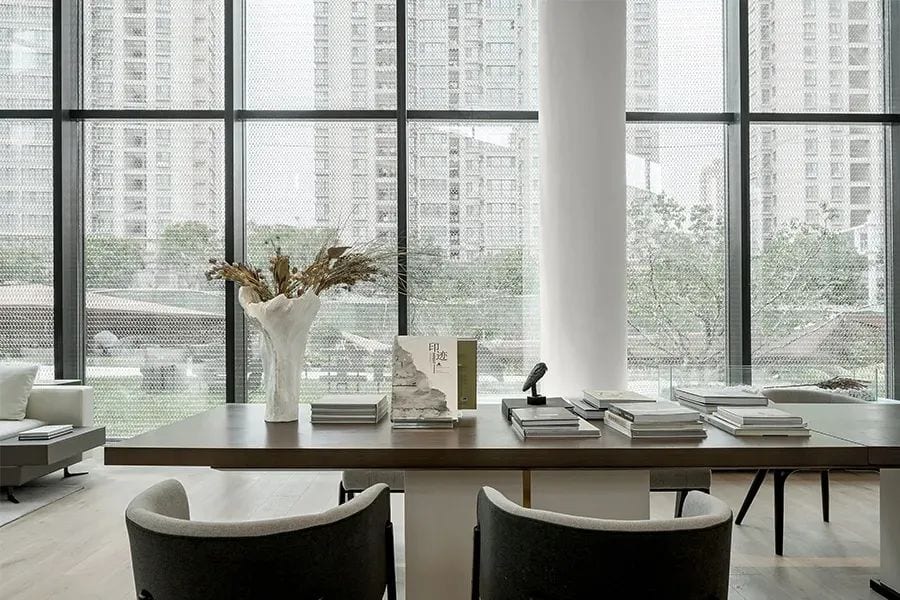 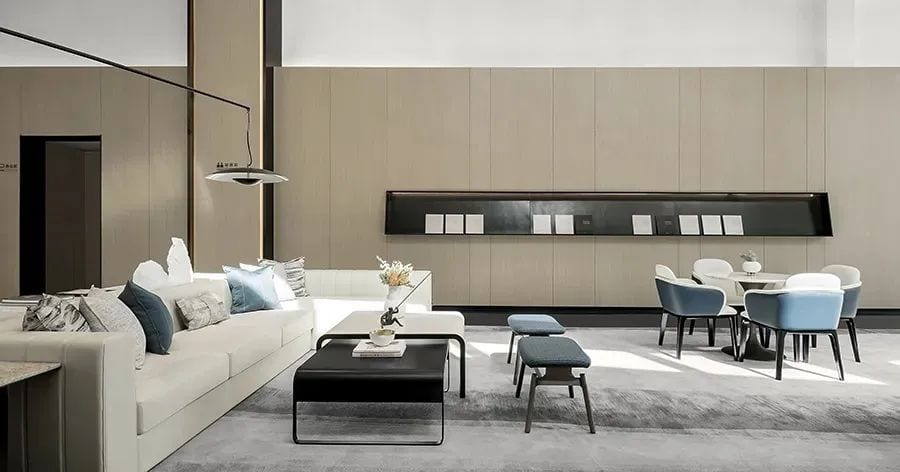 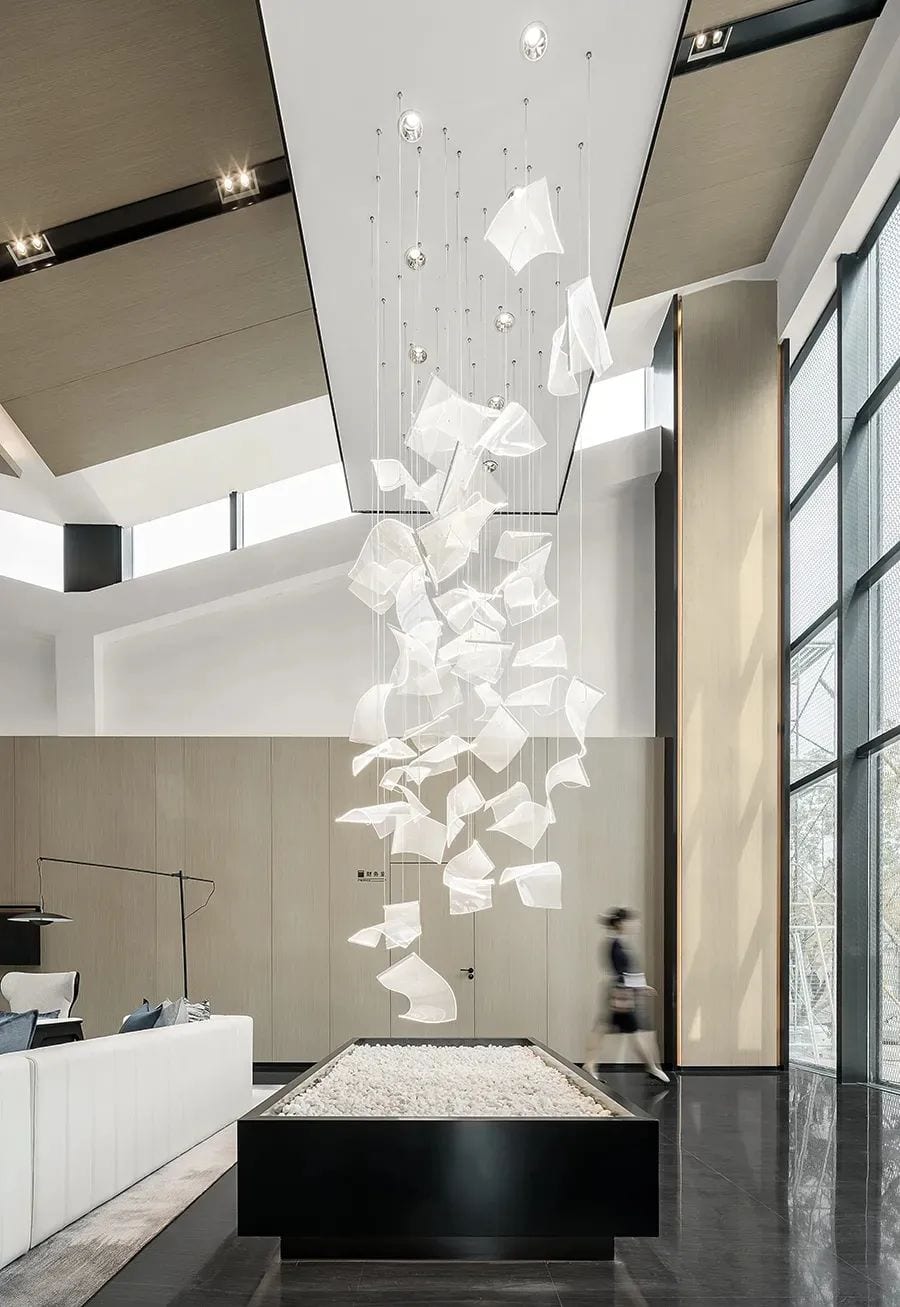 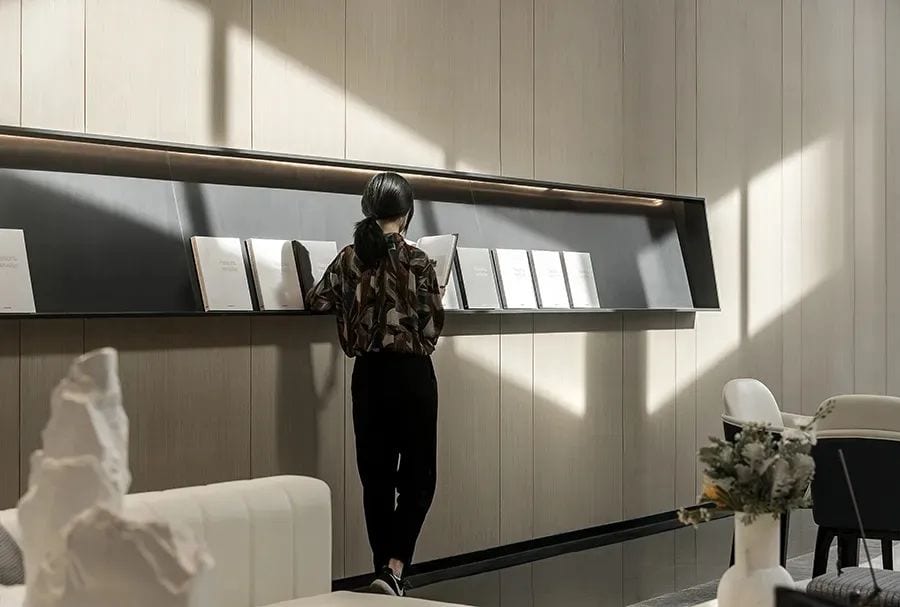 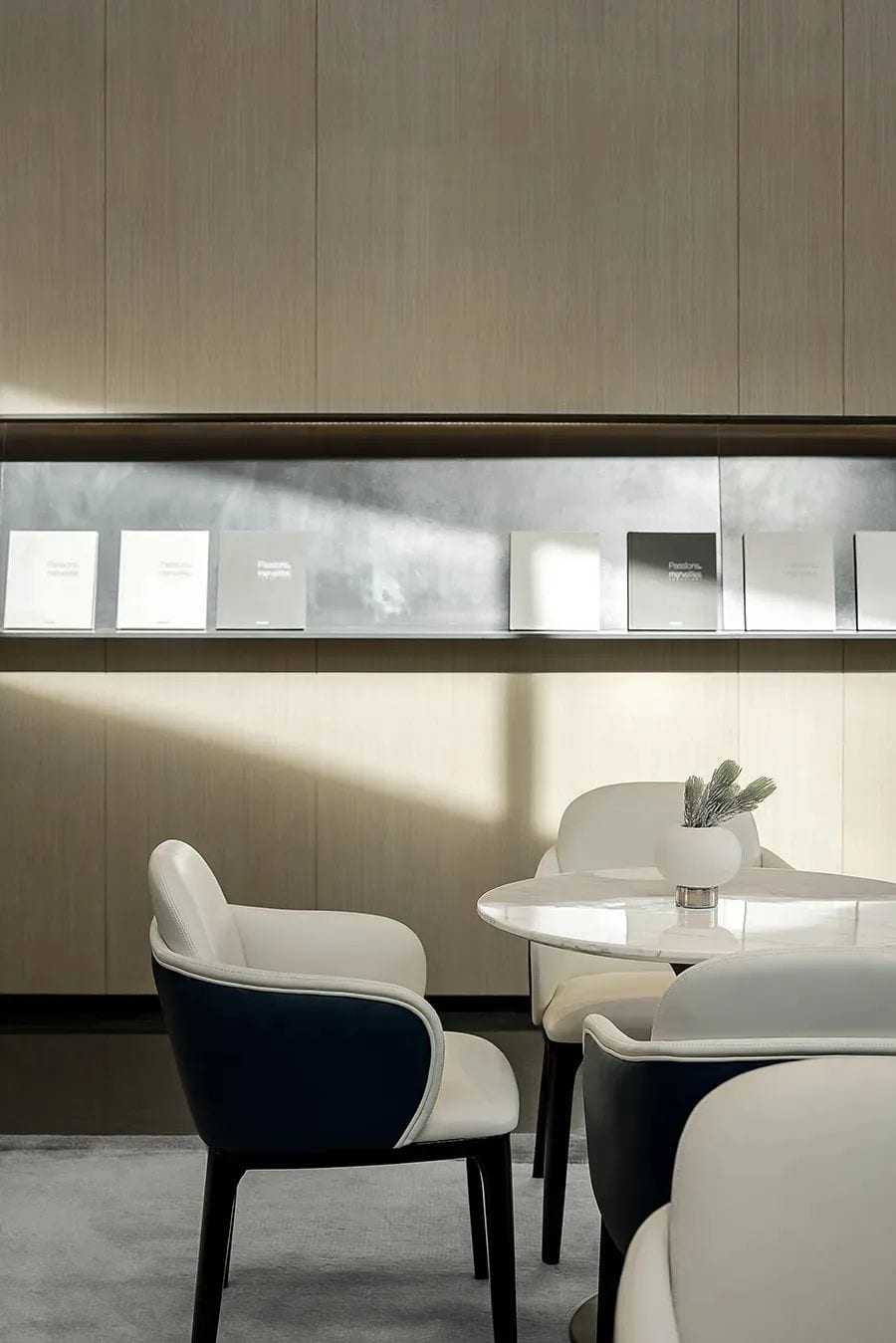 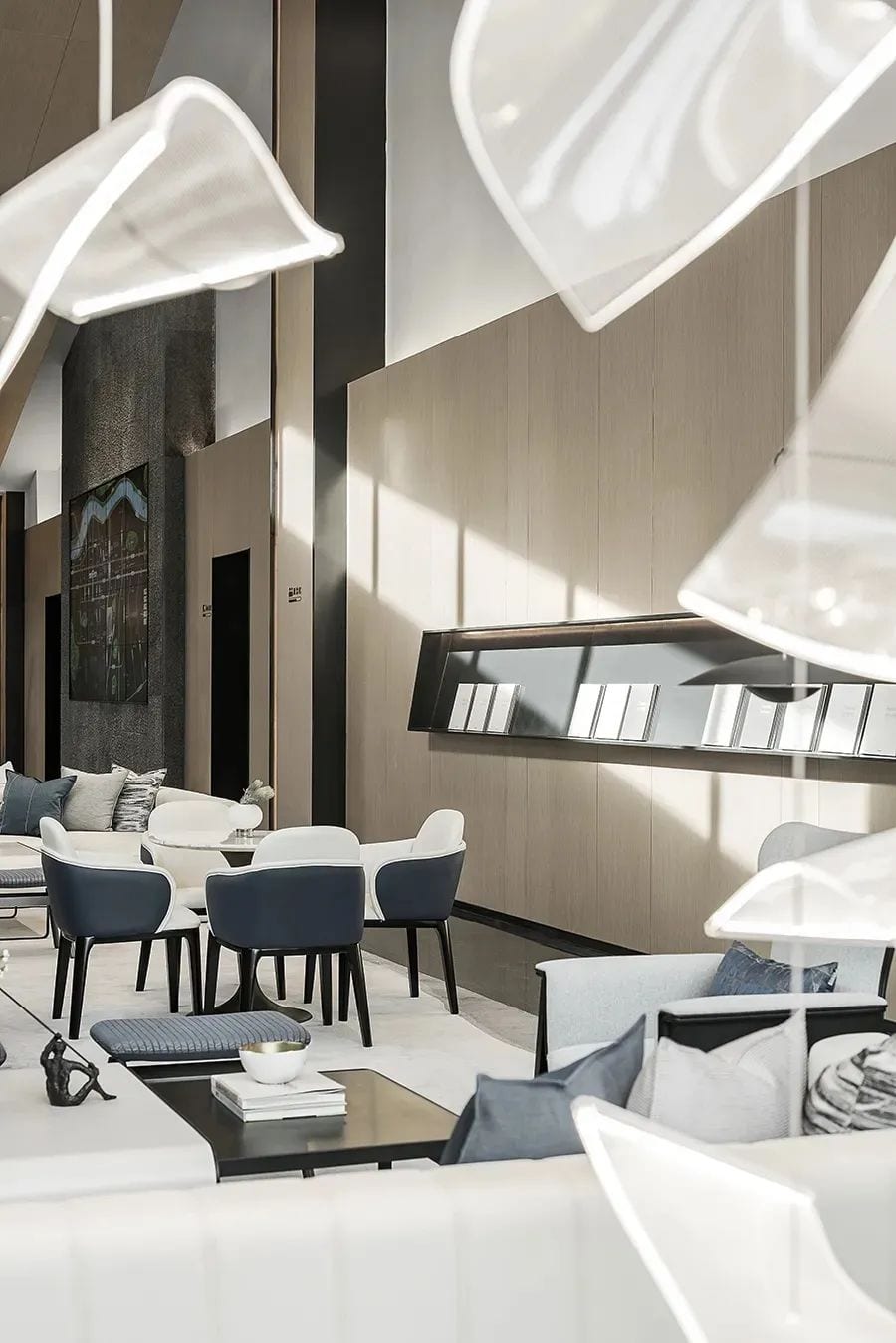 Black fluorocarbon metallic paint and black stone flooring, a collection of specialized materials, unify and emphasize the cold, hard industrial elements throughout the space, partly covered with a blanket that breaks the asceticism with softness, thus creating a balance.

This “sense of harmony” can be seen everywhere in the design, whether it’s the warm woodwork color added to the black and white tone of the whole space, or the bookcase with warm and delicate touch in the large space, all of them emphasize the overall feeling of cold neutrality on the one hand, and break the rigid state of the large space on the other, and reflect the sense of hierarchy and make the space achieve a balance.

If Lanzhou is a city that “lives elsewhere”, then the architecture is folded parallel to the façade, pulling it back a little, restraining the space a little, and closing it inward a little more, so that the language of three times and spaces forms an inertia, smoothly expressing a consistent yet restrained style. This is what AGH has always emphasized, to be rational and restrained in its modernity and sophistication. 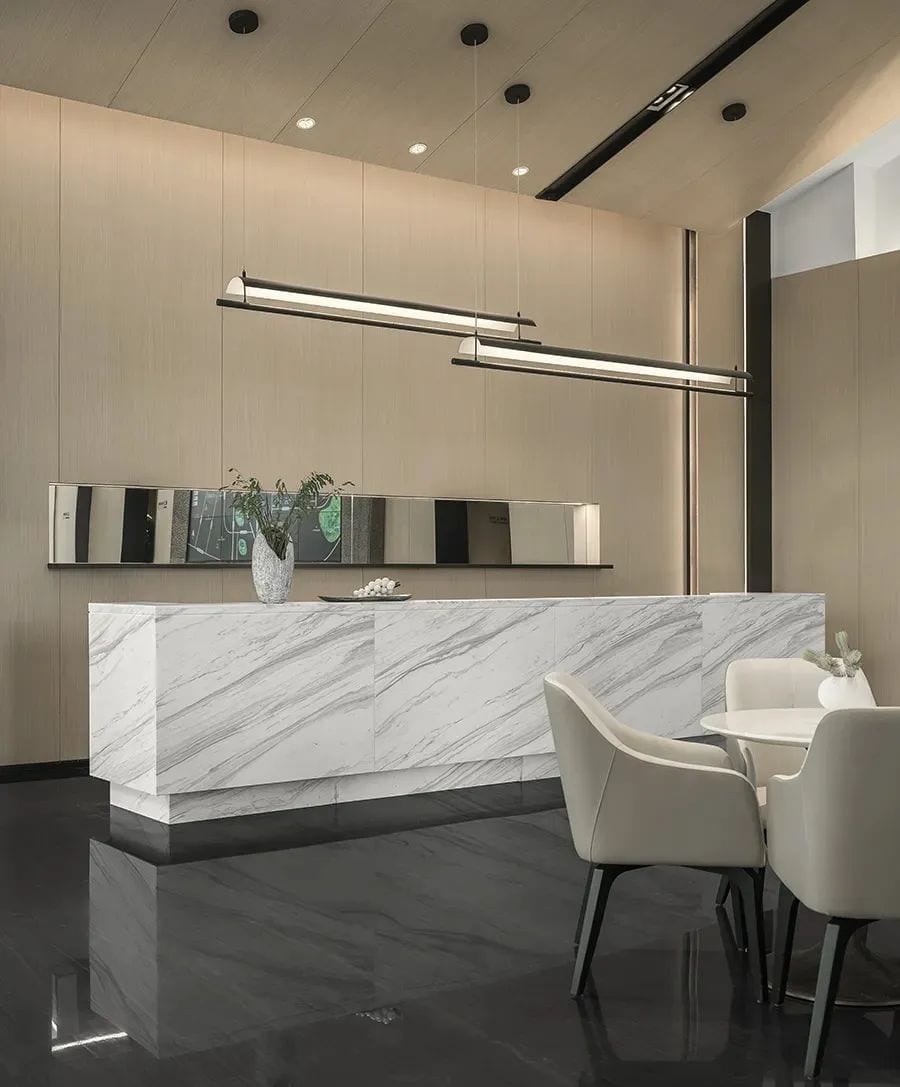 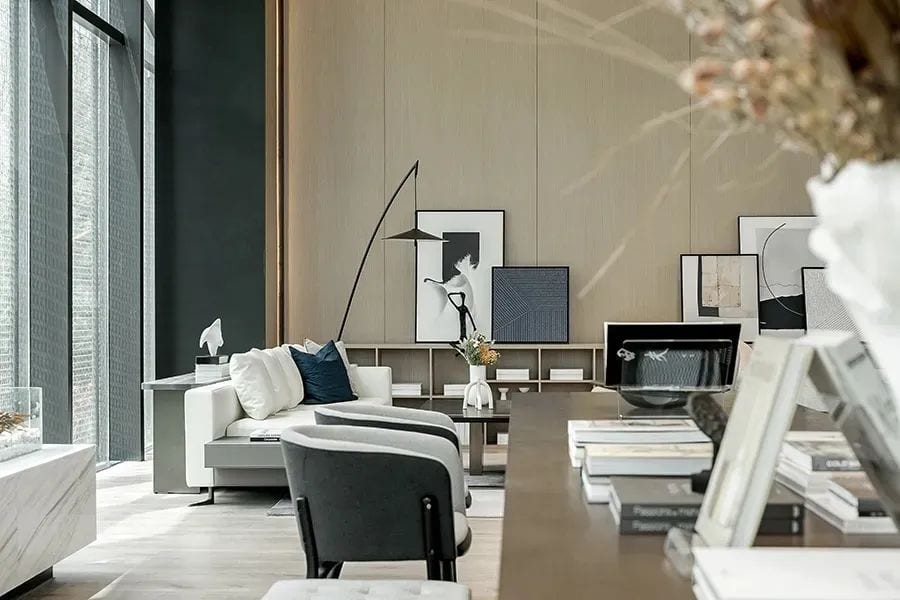 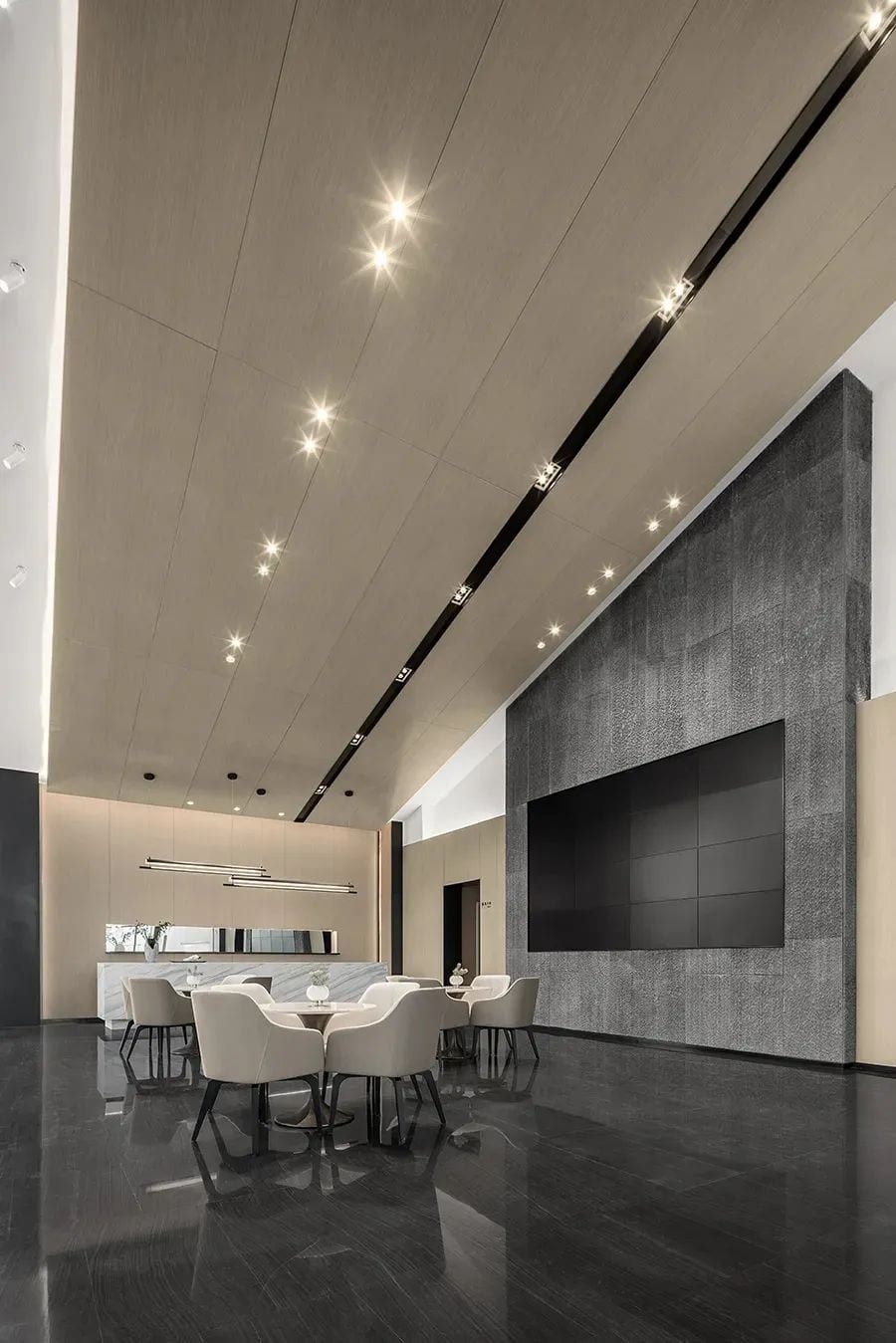 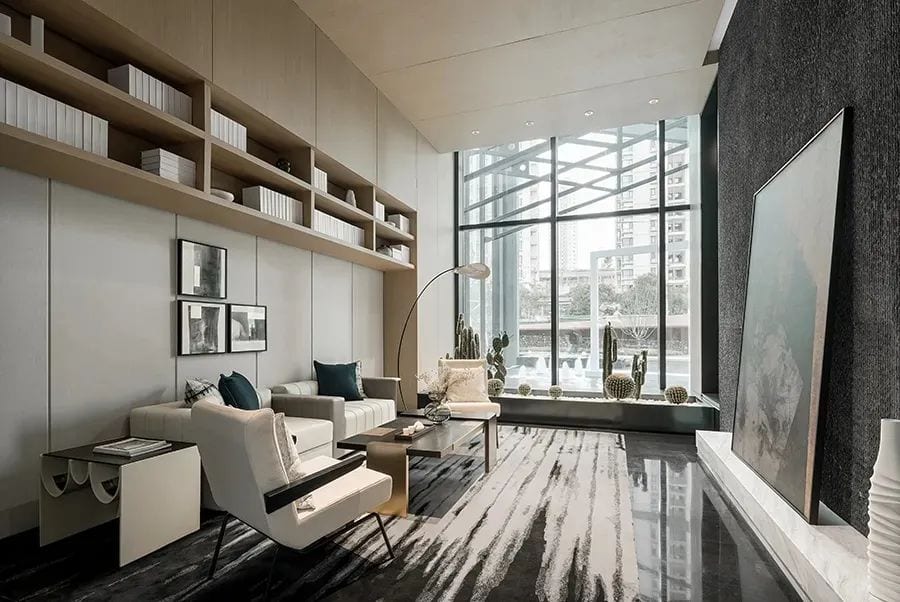 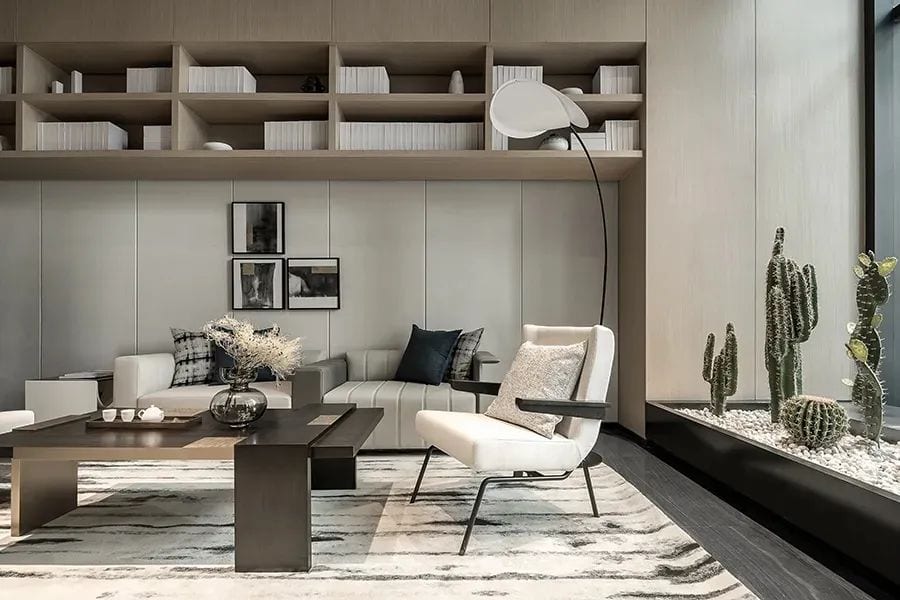 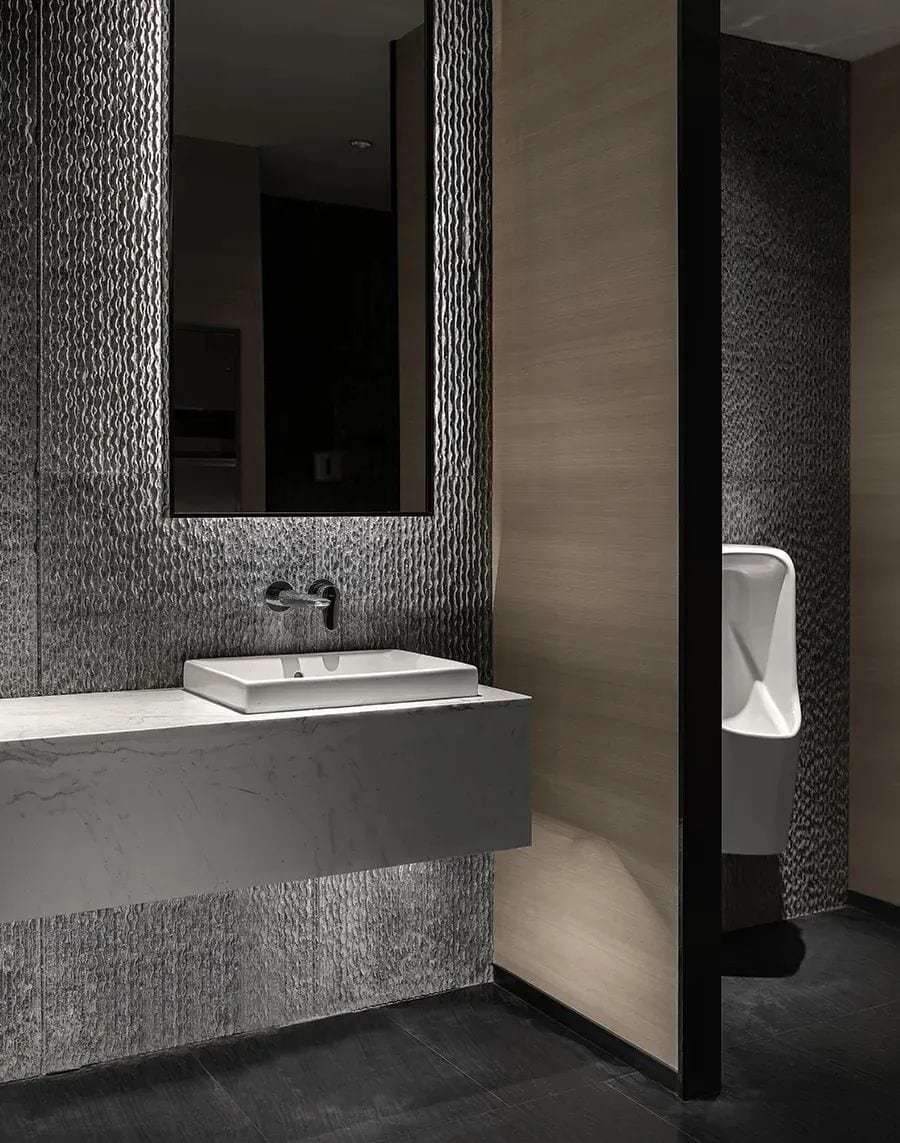 The glass embedded in the steel structure is wrapped in metal mesh that opens up to the red brick structure, the light in the architectural space is fading, and the warm yellow light of the interior is on.

It is the first time that the city has been inhabited. 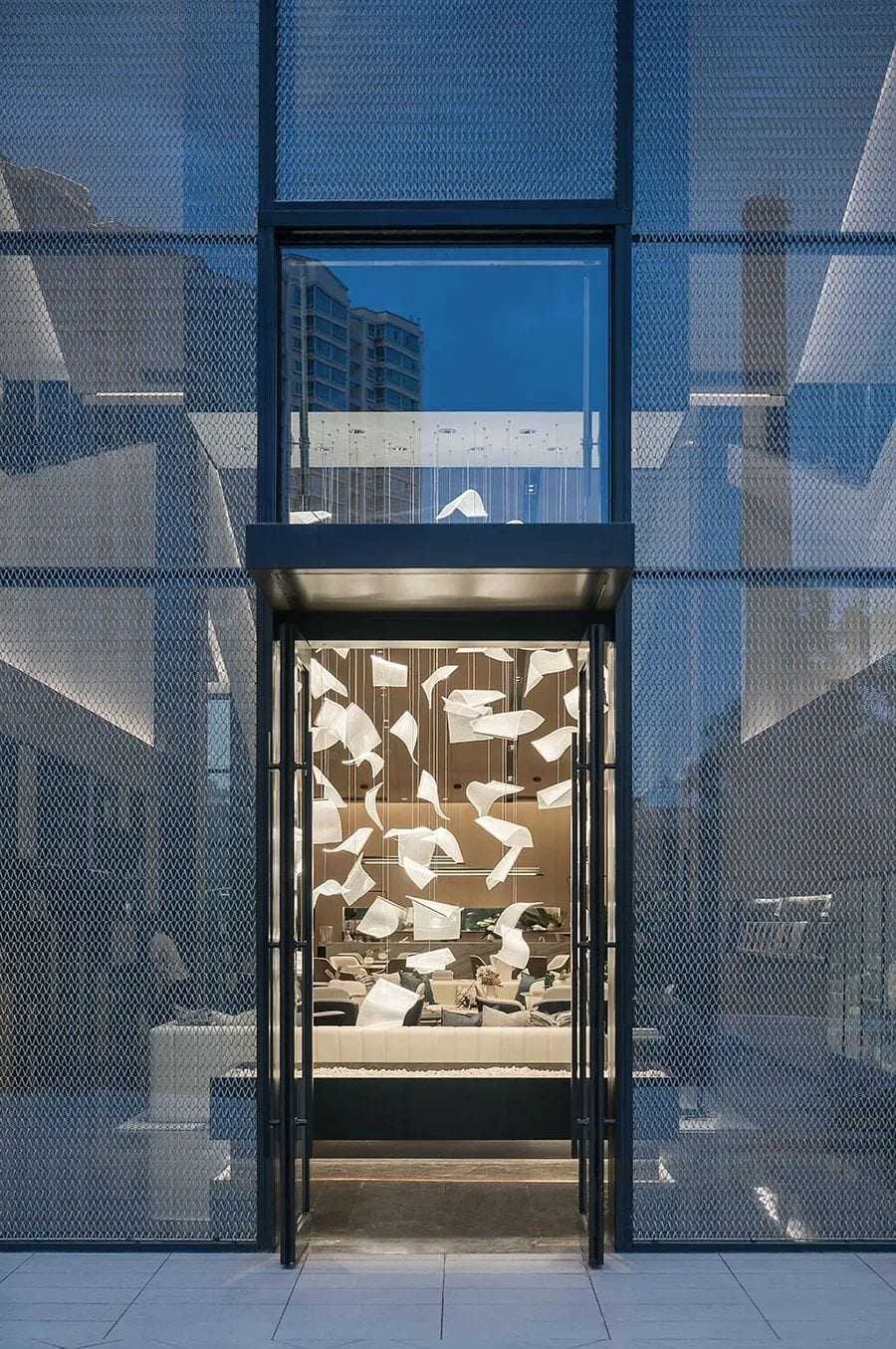 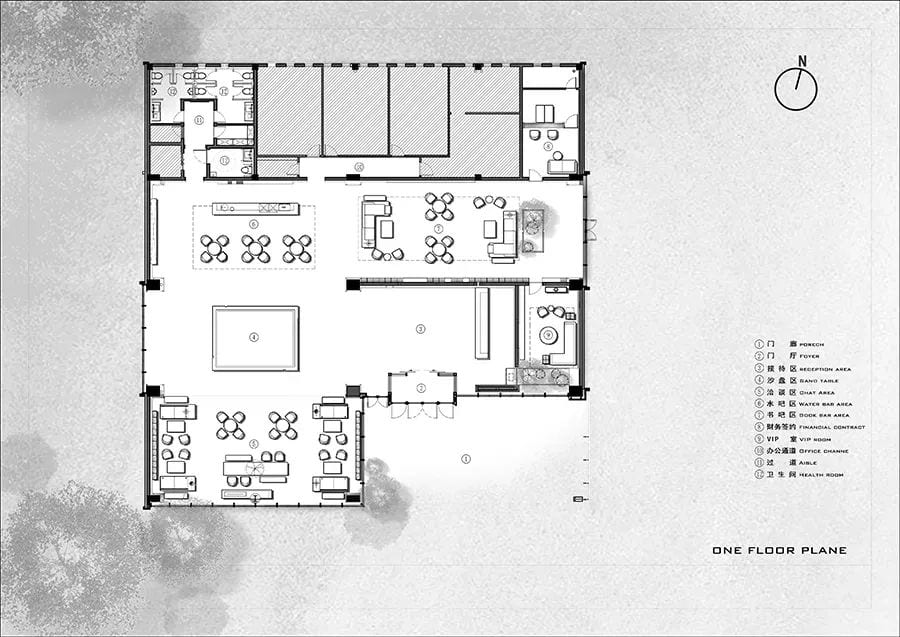 Previous:: Airy Cottage with Minimalist Nordic Sophistication Next: Besides Nendo, What Other Japanese Design Studios Are Worth Watching?
Related suggestion